The proposed laws respectively address items looted during World War 2, human remains, and other looted objects, including those from the colonial era. 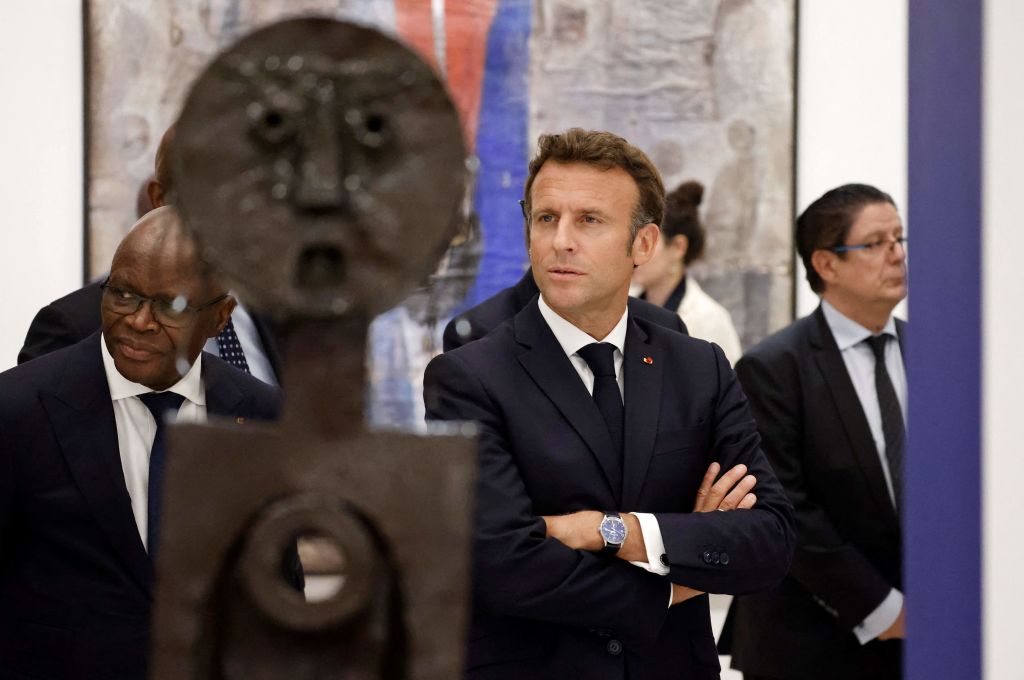 France's President Emmanuel Macron visits the exhibition "Benin Art of yesterday and today: from Restitution to Revelation" at the Marina Palace of Cotonou on July 27, 2022, as part of his official visit in Benin. - The exhibition features Beninese contemporary artists pieces and the twenty-six royal treasures looted by the French colonial soldiers recently returned by France.

French politicians are planning to introduce three framework laws intended to facilitate the restitution of contentious artworks as well as human remains currently held within the country’s public collections.

The trio of bills was announced by France’s ministry of culture this week. In what would be a first, one of the bills also offers an opportunity to legally acknowledge crimes committed against Jews during World War 2 by the French state, according to a French senator involved in drafting the bills.

Ever since French president Emmanuel Macron made the sweeping 2017 pledge to return African artifacts to the continent, in an attempt to ease relations with former French colonies, a waiting game has ensued; so far, 26 objects stolen from the ancient Palace of Abomey in Benin were restituted to the African country; one object was returned to Senegal; another is on long-term loan to Madagascar. Compared to other European countries, France is considered to be lagging behind on the issue of restitution, despite Macron’s groundbreaking promise. According to the 2018 Sarr-Savoy report on restitution, France has an estimated 90,000 African artifacts in its public museums. 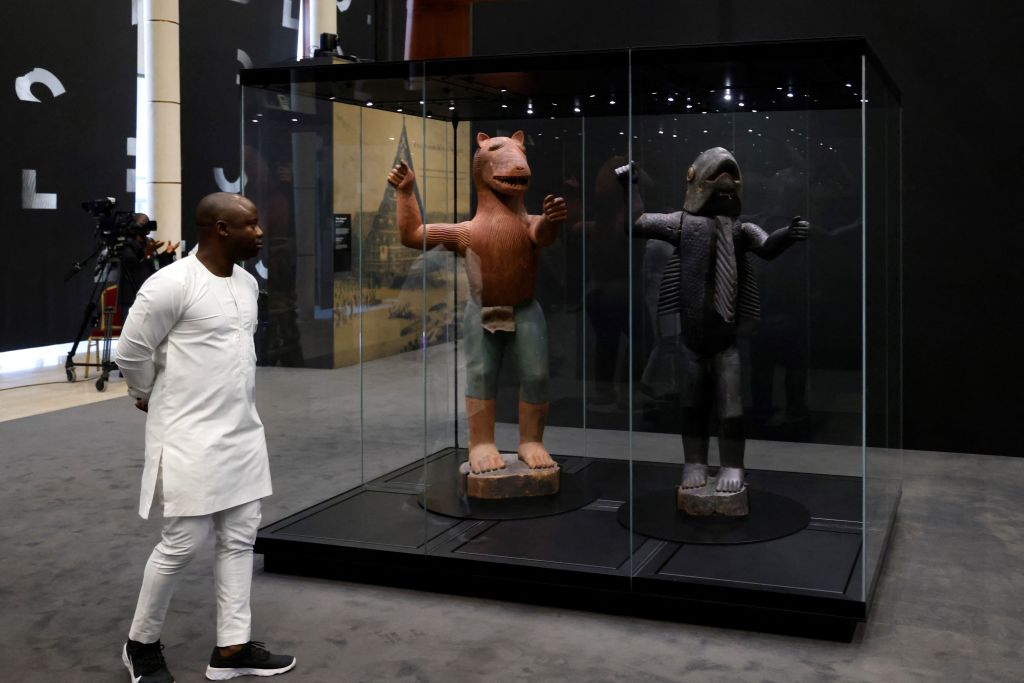 A visitor goes through the exhibition “Art of Benin of yesterday and today: from Restitution to Revelation” at the Marina Palace of Cotonou on July 27, 2022.

Though parliament voted in favor of returning individual works, progress has been marred by disagreement over procedures for larger-scale returns, and by the fact that objects entering France’s national collection are deemed inalienable by law, meaning that they can only be removed in case-by-case parliamentary votes.

“I hope 2023 will be a year of decisive progress for restitutions,” said French culture minister Rima Abdul Malak in her annual, New Year speech on Monday, January 16. The country’s approach to its own history is “neither one of denial nor of repentance, but one of recognition,” she added. Earlier, Abdul Malak announced the laws would be up for vote this year, making it possible to return an artwork as well as human remains currently in the national collection, without having to revert to parliament for approval, accelerating the process.

The laws will target human remains in museums, an amended version of an earlier bill proposed last year by French senators; another will address works belonging to Jewish families persecuted during the Nazi era; the third considers restitution of art objects, including those from the colonial era. The latter bill is spearheaded by former Louvre director Jean-Luc Martinez and notably addresses the return of art objects to Africa, among others. Martinez’s duties as France’s cultural heritage ambassador were reducedafter being charged with “complicity” in organized fraud and money laundering in connection to a global art trafficking scandal.

Growing public awareness around the issue of restitution has spurred this week’s announcement. The minister of culture “is very mobilized on the issue, which is a major change,” according to senator and vice president of a senatorial commission on culture, education and communication Pierre Ouzoulias, who has helped push restitution efforts. 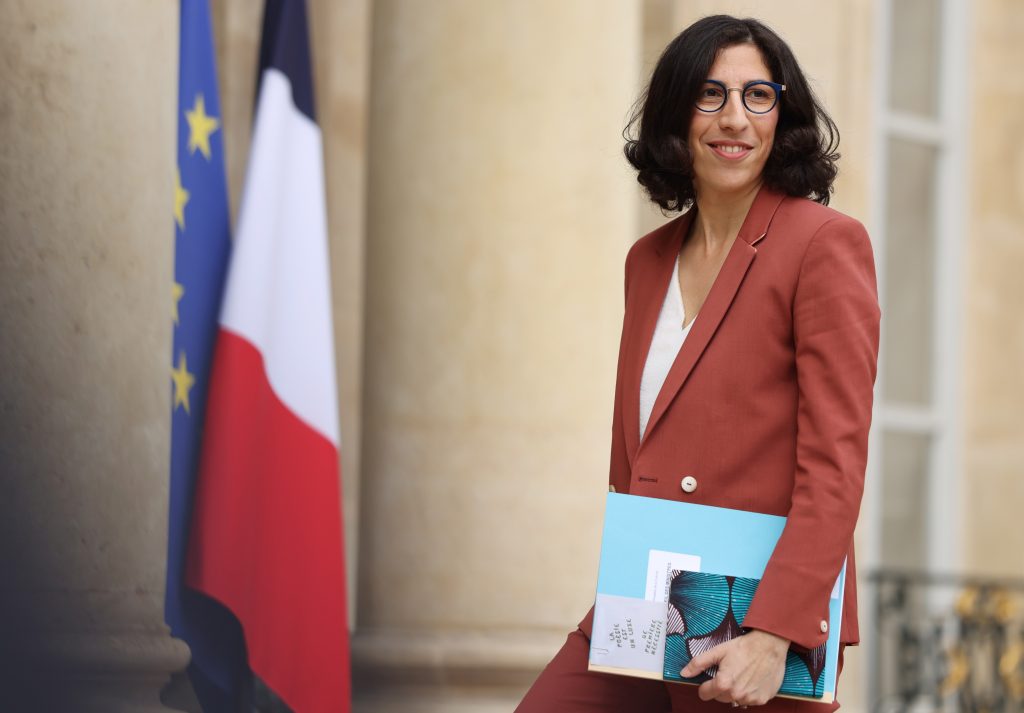 French Culture Minister Rima Abdul-Malak arrives for the first weekly cabinet meeting of the new cabinet at the Elysee Presidential Palace in Paris, France, on May 23, 2022.

With senators Catherine Morin-Desailly and Max Brisson, Ouzoulias proposed a bill in 2021 that was unanimously approved by the senate, to return human remains, but it was blocked by members of Macron’s administration at the time. The amended bill is likely to be put to vote before June. Morin-Desailly, who will present it, said that with continued, increasing demands from foreign nations asking for restitutions, “we’re at a critical point of no-return.”

In separate interviews, Morin-Desailly and Ouzoulias both noted that the new laws would entail special committees of scientific and legal experts that would include counterparts from the countries requesting restitution. Together, they would determine if an object meets criteria needed to remove it from France’s national collections. Once that conclusion is made, the sitting administration would decide whether or not to return an object, without having to revert to parliament as it does now.

The government will also need to streamline a plan to catalog objects of questionable provenance in French museums, particularly human remains, the total number of which are not known.

The framework law concerning cultural goods seized during France’s Vichy government is also an opportunity to state within law the crimes the French state committed against Jews during World War 2, as justification for the return of an object, said Ouzoulias. Currently, he added that no such wording exists in French law, and he is advocating for such an inclusion in the bill. Both Ouzoulias’ grandparents were in the French Resistance.

“Without Germany asking them to do so, the Vichy government voted very early for laws which stripped Jews of certain rights … including material goods and artworks,” he noted. Though restitutions have been made to Jewish victims by the French state, and former French president Jacques Chirac officially recognized the state’s anti-Semitic laws of the time, Ouzoulias said France’s parliament has not examined the damage Vichy legislation inflicted upon Jews, while  French courts have. “What’s missing is recognizing it in the law,” he said. “We can offer legal measures to repair those damages … and we can start with artwork.”