Provenance Research at the Rijksmuseum Amsterdam: A four-century-old miniature portrait of a courtier of the Mughal Empire

'After the liberation of Amsterdam, I only weighed 82 pounds and was completely broken mentally and physically.' - Werner Münsterberger (1913-2011)[1] 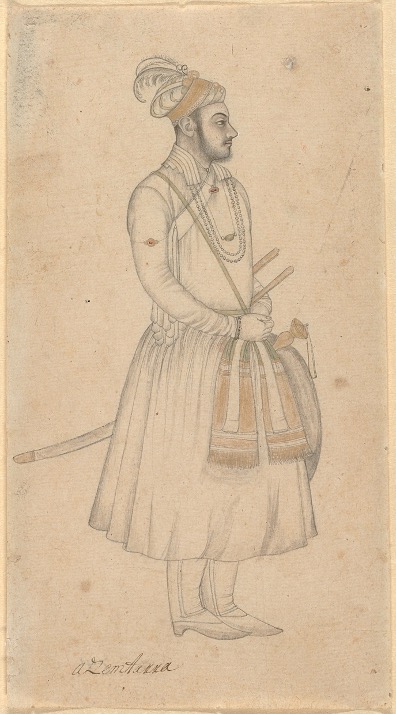 What connects this anguishing self-description at the end of the Second World War with the magnificent, almost four-century-old miniature portrait of a courtier of the Mughal Empire?

One answer to the question is the result of provenance research conducted at the Rijksmuseum Amsterdam. The drawing has been in the museum's collection since 1945 and was most likely acquired from Werner Münsterberger (1913 Dortmund - 2011 New York), a German-Jewish art historian, ethnologist, collector and later psychoanalyst of James Dean.

In 1935, the 22-year-old Münsterberger fled persecution from Germany to the Netherlands, where he completed his doctorate on Indonesian creation myths in The Hague in 1939. His first employment was at the Colonial Institute Amsterdam. However, he was dismissed in 1942 because of his Jewish origins. Between 1943 and 1945, Werner Münsterberger went into hiding in the home of the actress Elisabeth Andersen (1920 Den Haag - 2018 Haarlem) in Amsterdam.

Andersen, who would later become famous in the Netherlands, took care of him during the war. According to his own account, he sold artworks far below value on the black market during this time in order to contribute to their livelihood. Various sources reveal that Werner Münsterberger remained without permanent work in the Netherlands after the war due to his statelessness as a result of persecution. Elisabeth Andersen would later say about it in an interview: 'It was a terrible time for many people who came out of that bloody war, out of hiding and out of the camps, that is often forgotten'.[2]

The year 1945, in which the now 32-year-old Münsterberger sold the drawing to the Rijksmuseum Amsterdam, possibly refers to the post-war period. But research into the context of the transaction brings new insights: The sale was very likely a direct consequence of Werner Münsterberger's difficult living conditions during and immediately after the end of the war, which resulted from persecution by the Nazi regime. The provenance of the miniature portrait, examined with a focus on the period 1933-1945, must therefore be regarded as problematic.

Since 2012, the Rijksmuseum conducts in-depth provenance research on the objects of its own collection with a team of five provenance researchers. The aim of the meticulous investigations is to determine the origin and whereabouts of as many objects as possible in the period between the Nazi takeover in Germany and the end of the Second World War in 1945.

This month, the provenance team celebrates its 10th anniversary. In these past ten years, more than 14,000 objects have been examined and lasting knowledge and experience gained.

Over time, the provenance team has thus developed into a project that is increasingly integrated into the research tasks of the Rijksmuseum. Beyond the museum walls, the researchers have built up a large network of international colleagues and stakeholders. This enables a constantly evolving and enriching exchange as well as expansion of expertise, both internally and externally.

In this way, unravelling the context of an object's ownership is becoming an essential part of ongoing collection research at museums. Besides insights into ownership, this research leads to further findings about little-known individual histories, society and diversity, as well as the institutional history of the museum. As the custodian of the national artistic and cultural heritage of the Netherlands, the Rijksmuseum is aware of its particular societal role in this context. By reconstructing and narrating the stories of a broad spectrum of people who were or are part of society, the museum can also contribute to a form of justice and to the preservation of a living memory. Provenance research makes a concrete contribution to this.

More information about provenance research can be found on the Rijksmuseum website, where the reports with research results are made publicly accessible. Furthermore, it is now possible to search the collection digitally by provenance name, using the 'advanced search' option and then the 'provenance name' search bar.

Should you have more information about the provenance of an object in the Rijksmuseum collection, you are most welcome to contact us via provenance@rijksmuseum.nl. We are also pleased to receive your messages on other questions, comments or suggestions.

For searching in the online collection on provenance name see Rijksmuseum