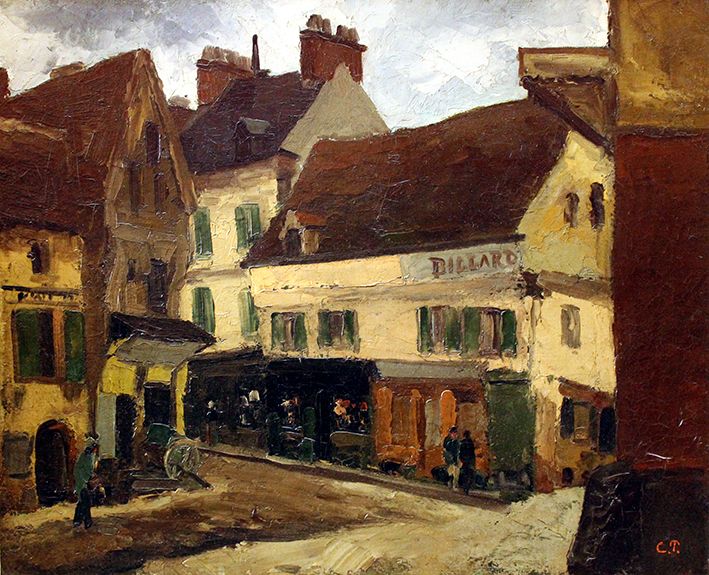 Camille Pissarro, Une place à la Roche-Guyon (1867) was bought by the National Galerie in 1961 from A. Tooth, London. On 14 April Hermann Parzinger, the chair of the museums of Berlin, agreed to "restitute" the looted painting, asking for an agreement to keep the work at the museum.

Once again, French museums are heading to court over their refusal to restitute works of art claimed by Jewish families persecuted by the Nazis.

On Friday, attorney Corinne Hershkovitch summoned the Musée du Louvre and Musée d'Orsay, as well as France's culture ministry and four provincial museums, demanding the restitution of 21 works from the collection of Armand Isaac Dorville. The state claims that the objects were not looted but sold in an estate sale after Dorville's death. A hearing is planned for September.

Armand Dorville, a prominent lawyer and collector, fled Paris in 1940 when Germany invaded France to take refuge at his residence in the village of Cubjac in the south. He died there in 1941 and his collections of paintings, sculptures, furniture, drawings, books and manuscripts were all put up for auction. At an auction at the Savoy Hotel in Nice, 450 works by Delacroix, Rodin, Carpeaux, Renoir, Manet, Degas, Bonnard, Vuillard, Signac and Caillebotte among others were sold between 24 and 27 June 1942. French police, who had been directed to “eliminate all Jewish influence in the economy”, were alerted at the last minute that Dorville was Jewish and appointed a fascist activist as the administrator of the estate. Upon his arrival in Nice, the administrator seized the proceeds from the sale. He was also instructed to sell the estate in the south as well as Dorville’s other properties; his apartment in Paris was looted.

However, the 1941 law regarding the seizure of all Jewish property stipulated that those who had been awarded a military medal were exempt. This was the case for Dorville and several of his relatives who had fought in the First World War. At the end of 1942, the administrator thus suspended the “aryanisation” of Dorville's estate. But the proceeds from the sales were blocked and were only restituted to those heirs who had survived by 1947. Meanwhile, in 1944, Dorville’s sister, her daughters and her grand-daughters aged two and four were arrested and sent to their deaths in Auschwitz. For the family’s lawyer, “it is obvious that this was a forced sale, as the Dorvilles were not able to dispose freely of their property because of the laws of racial persecution”.

France's advisory body, however, claims that the sale was not forced and therefore the works cannot be restituted. But in exchange for the reimbursement of the purchase price, the state has offered to return 12 of the works that were purchased by the Louvre during the sale in Nice. It is refusing to enter into negotiations over the other nine works, which were purchased by other museums after the Second World War. The offer has left the family outraged.

The position of the French government contrasts starkly with that of Germany, where three works found in the collection of the notorious art hoarder Cornelius Gurlitt were swiftly restituted to Dorville’s heirs in January 2020. Furthermore, in April, Berlin museums agreed to "restitute" a landscape by Pissarro, but asked for an agreement with the heirs to keep it in the city's National Galerie.

This is the third time since the 1990s that Hershkovitch has filed a lawsuit against French museums and each time they were ordered to restitute the looted works.