As a Lawsuit Over the Nazi-Looted Guelph Treasure Goes to the Supreme Court, Congressional Leaders Blast Germany’s Attempt to Derail It

The Supreme Court will hear arguments in early December. 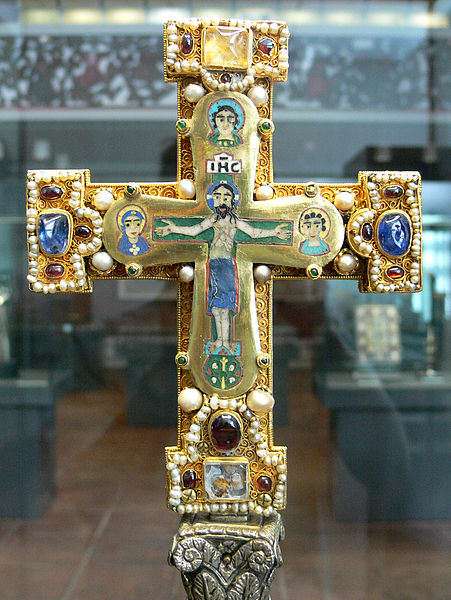 A Guelph Treasure Crucifix, currently on display at the Bode Museum, Berlin

A bipartisan group of lawmakers have written letters to the German ambassador to the US and the Solicitor General condemning Germany’s attempt to persuade the US Supreme Court to drop a Nazi loot claim.

Germany filed the petition last month to the Supreme Court asserting that its government should not be sued over what’s known as the Guelph Treasure, a group of more than 80 works of medieval art which have been at the center of a bitter legal fight for the past five years.

According to the plaintiffs’ claims, in 1935, Nazis forced a collective of Jewish art dealers to sell the works for a fraction of their value—and even that amount was never received—and their heirs have been fighting to get them back. The works are currently on display in a German museum.

“We write with concern about the recently filed German brief before our Supreme Court,” reads the letter, which was signed by 18 members of Congress. “While we are not taking a position on this case, bipartisan Congressional action related to Holocaust-era artwork restitution, the timeline of the Holocaust, and the scope and nature of genocide are long established.”

The Supreme Court agreed to hear the case in July. Nicholas O’Donnell, the attorney representing the plaintiffs, filed his team’s brief to the court today.

“A 1935 transfer from German Jews to notorious art looter and war criminal Hermann Goering is the quintessential crime against international law, regardless of Germany’s Holocaust distortion in defending this case,” said O’Donnell in a statement.

The questions before the court largely center around jurisdiction and application of the Foreign Sovereign Immunities Act, but the larger issue is whether the court will give Germany and the Prussian Cultural Heritage Foundation special treatment, says O’Donnell, even though the coerced art sale has been well documented.

According to the congressional members’ letter to the German ambassador, Emily Haber, “your government seems to be arguing that forced sales of art to the Nazi regime do not constitute takings at all and that the definition of genocide does not include what happened with respect to the full elimination of Jews from German economic life starting in 1933 when Adolph Hitler and the Nazi regime took complete control.”

A second letter, addressed to Jeffrey Wall, acting Solicitor General of the US, was signed by six members of Congress. “We were concerned to read that the United States’ brief for this case supports a German position that suggests that the sale of the cultural artwork collection in question was not forced based on the year of the sale,” it reads.

US Secretary of State Mike Pompeo is copied on both letters. Pompeo’s press representatives did not immediately respond to a request for comment.

In a filing today, O’Donnell wrote that, in 1935, the Nazis—led by Hermann Goering—”forced” the sale of the Guelph Treasure (known as the Welfenschatz in German) from the Jewish art dealers. “The transaction at the heart of this case began in a letter to Hitler from the mayor of the city where the [dealers] lived; it was pushed along by participants in the conference where the Final Solution was decided; and it was directed by Hermann Goering,” he wrote. “If such a coerced sale is not a taking in violation of international law, then nothing is.”

According an email from a representative for the Prussian Cultural Heritage Foundation (SPK), “The “forced… to sell” assertion is directly contradicted by the fact that the Advisory Commission in Germany determined in 2014 that the Guelph Treasure’s sale in 1935 was not a forced sale due to Nazi persecution. Further, the assertion that the “amount was never received” by the art dealers is contradicted by the SPK in its filings and public documents.