A Jewish artist hid hundreds of her paintings in a house near Prague during the Holocaust. Now the works need a home. 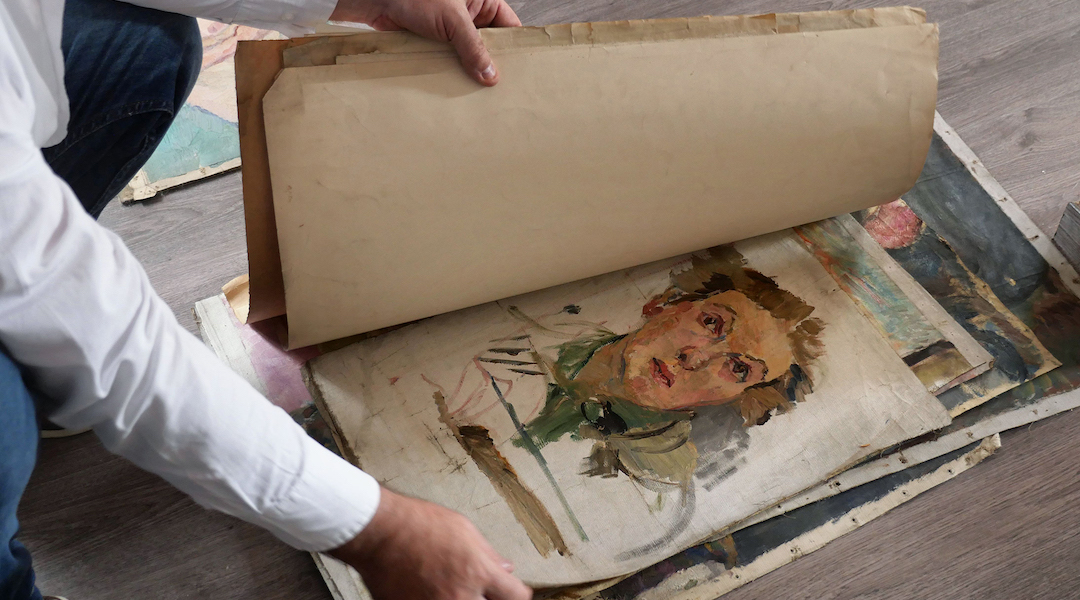 Gertrud Kauders hid about 700 of her paintings in a classmate's house during WWII.

Plans are under way to find a home for a huge trove of works by a nearly forgotten Jewish artist that was uncovered 78 years after her death in a Nazi concentration camp.

The works of Czech artist Gertrud Kauders (1883-1942) were found during the demolition of an old house near Prague in 2018, when 30 paintings tumbled onto the head of a worker. Hundreds more canvases were found in the walls and under floorboards of the home where the artist had stashed them to keep them out of Nazi hands.

Only this summer did the dimensions of the collection become clear, after photojournalist Amos Chapple and his colleague Dana Katharina Vaskova tracked down Jakub Sedlacek, the owner of the demolished house, on behalf of relatives of the artist living in New Zealand.

What they thought would be a small collection turned out to be “enormous,” said Chapple, himself a New Zealander, who works in Prague for Radio Free Europe/Radio Liberty. They reported the find on the news organization’s website.

“It was breathtaking,” recalled his colleague Vaskova, who was born in Prague and grew up in Munich, Germany.

Gertud Kauders had studied with the well-known Czech artist Otakar Nejedlý (1883-1957) and painted many impressionist portraits and scenes from nature. In 1939, the year that the Nazis invaded the Czech provinces of Bohemia and Moravia, Kauders asked her classmate, the Russian-born Natalie Jahudkova, to hide her life’s work. Since Jahudkova’s house was under construction, it was relatively easy to slip the paintings into the walls. 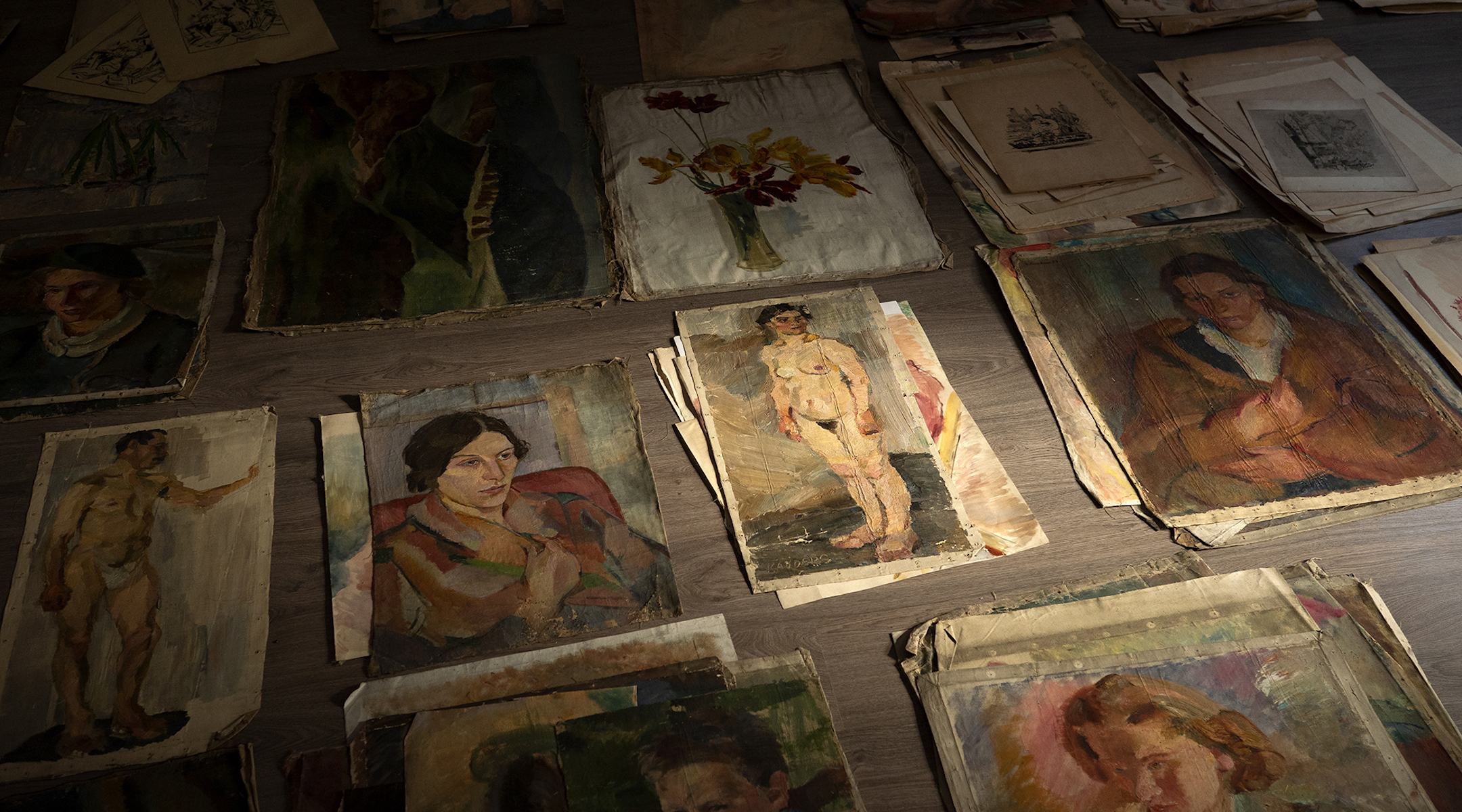 “There were stacks and stacks, in perfect condition, torn hastily out of their frames and hidden,” photographer Amos Chapple said.

But the secret died with Natalie Jahudkova in 1977.  In 2018, Jakub Sedlacek, whose grandmother was informally adopted in the 1920s by Jahudkova, had the derelict house torn down. It was then that the collection came to light.

But news reports at the time referred only to a few dozen unspectacular works that had tumbled on the foreman’s head. The story slept for another year.

Then, in 2019, descendants of Kauders’ nephew, Cornelius – who had fled to New Zealand in 1939 – saw the story and reached out to Chapple through his father, a friend.

“They said, ‘Hey, we are at dead ends wherever we go when we try to find out what happened to the art,’” Chapple told the Jewish Telegraphic Agency.

Chapple teamed up with Vaskova, who tracked down Sedlacek. He eventually invited the two to visit.

“I had come with the intention to photograph 30 paintings for the Jewish Museum of Prague,” recalled Chapple. “Then Mr. Sedlacek said, ‘Now I will show you the real collection.’”

“I will remember the moment for the rest of my life,” said Chapple, who was standing behind Vaskova. “We came around a corner, and there was an enormous expanse of what was instantly recognizable as serious art. My mouth was hanging open.”

“There were stacks and stacks, in perfect condition, torn hastily out of their frames and hidden,” Chapple said. There were about 700 works in all. “To see these things was incredible, unforgettable.” 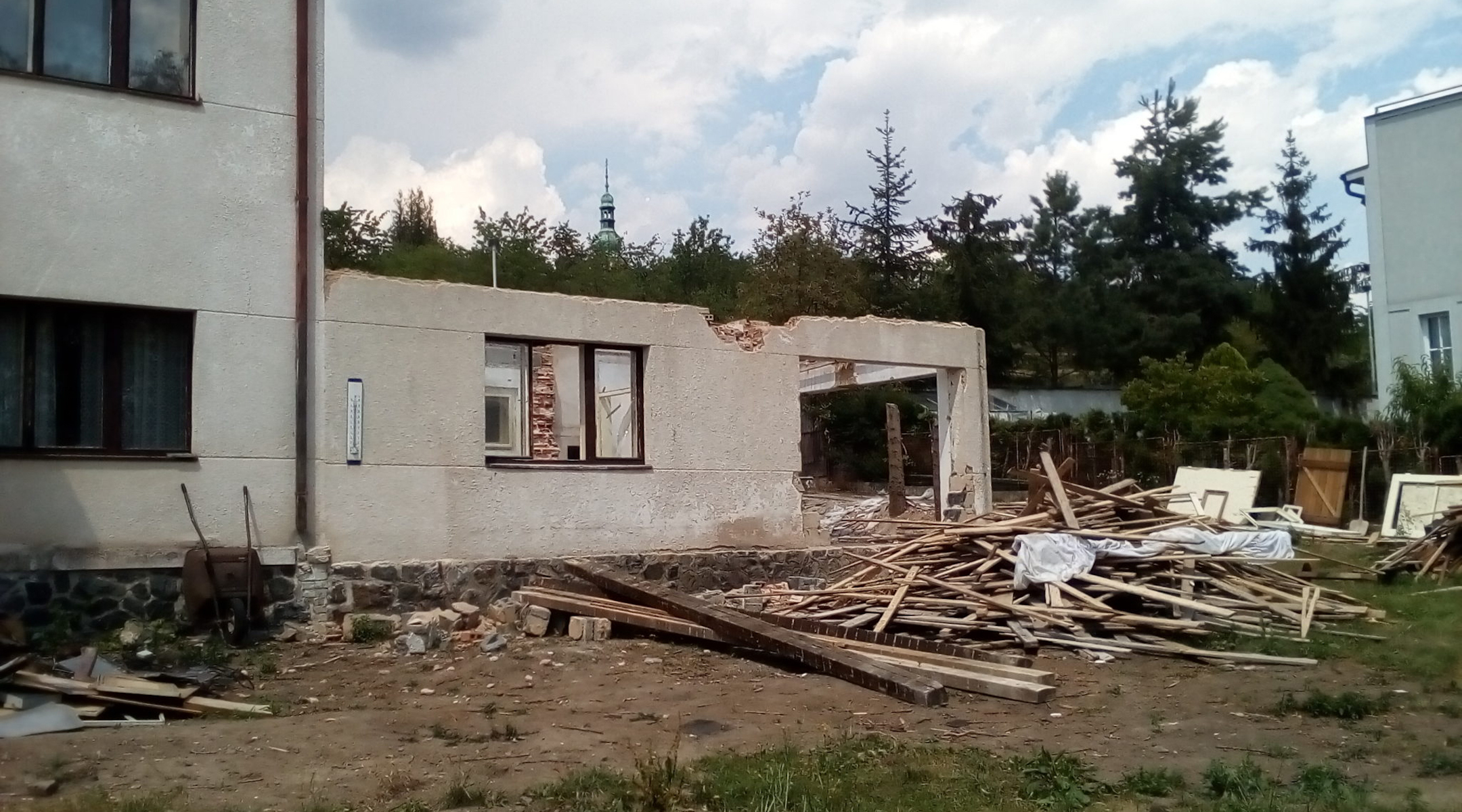 The house near Prague contained several hundred of Kauders’ works.

Vaskova said she was “amazed” by the artwork, which date from the 1910s to 1930s, and moved by the stories Sedlacek told about Jahudkova’s friendship with Kauders.

Sedlacek, who himself had not seen all the works, invited them to return to photograph the collection. They did so last month.

“He left us alone with the paintings,” said Vaskova. “He made coffee for us and gave us food and drink. It took us 5-6 hours.”

Chapple described the scene as one of “frantic activity.” They photographed one after another, largely without lingering.

But “there was one sketch that made us both stop,” Chapple said. “It was a … beautiful image of a boy being comforted by an older girl, and the caption said, ‘Were you frightened, little one?’ It looks like the little boy had a nightmare. We are fairly certain that this was Gertrud and her nephew [Cornelius], the sole survivor from the family.” 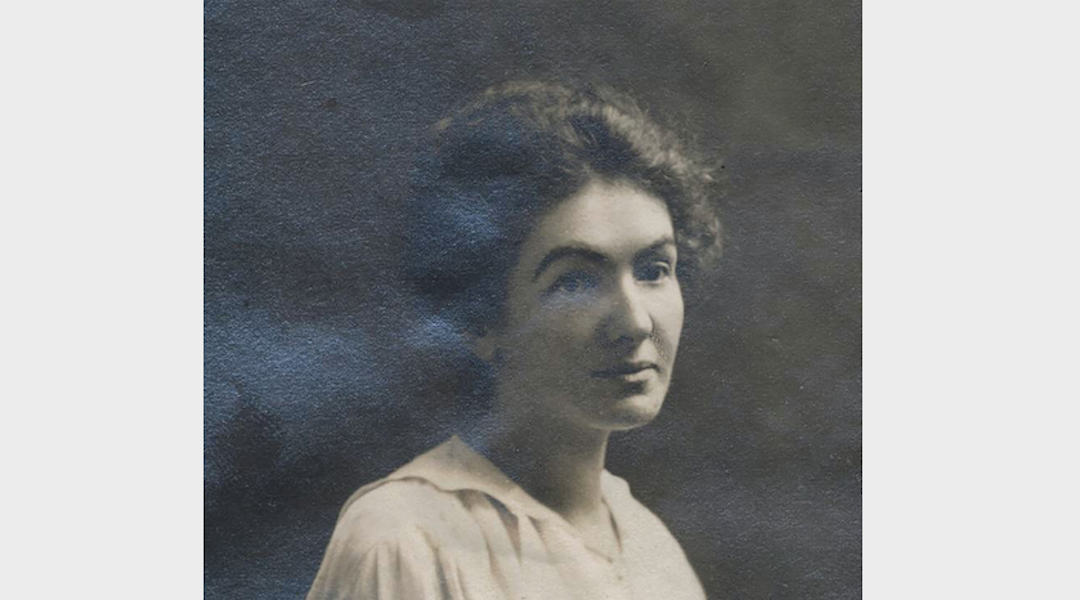 An image of Gertrud Kauders, who was killed in a Nazi concentration camp.

The paintings made the past – and Kauders’ fate “at the hands of the worst evil that modern history has ever known” –  seem very close, said Chapple. “Those people had the same feelings and fragility as we do.”

Sedlacek told Chapple and Vaskova he wants to see the works housed together in the Czech Republic, with family portraits going to the Kauders family in New Zealand.

Meanwhile, Kristýna Říhová, a spokesperson for the Jewish Museum in Prague, said in an email to JTA that she would get informed about the “whole intense process” and give a “concrete result as soon as possible” as to whether or not the museum could house some of the paintings.

Vaskova has since learned that Kauders was “well-regarded” though not famous; reviews of exhibitions in the 1930s “mention her as one of the better artists of the time.”

“It would be nice for her to get the credit,” she added. “Not only because she was Jewish, and died where she died — but as a woman. Women did not get all that much credit at the time… She should not be forgotten, since she was just found again.”