France to hand back three paintings looted by Nazis


Canvases by Andre Derain were once owned by renowned Parisian gallery owner Rene Gimpel, then seized as spoils after his arrest for joining Resistance to fight Nazi occupation 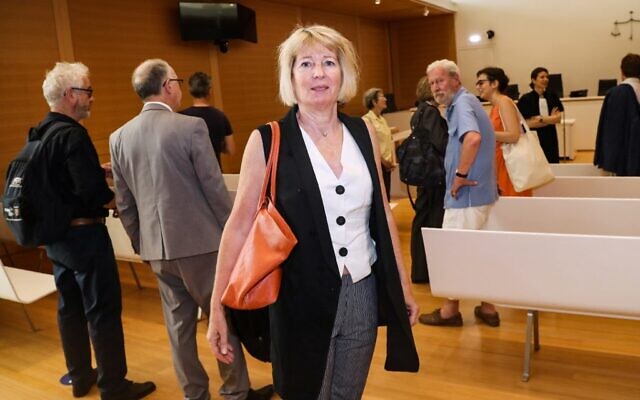 Claire Gimpel arrives in the Paris appeals court courtroom for the opening of a trial with members of her family, descendants of Jewish art collector Rene Gimpel, who filed suit against the state for restitution of three Andre Derain paintings looted during WWII in Paris; June 25, 2019

PARIS, France — The French government agreed Thursday to hand back three looted paintings to the heirs of a Jewish collector who died in a German concentration camp.

The canvases by Fauvist Andre Derain were once owned by the renowned Parisian gallery owner Rene Gimpel, who was denounced by a rival dealer after joining the Resistance to fight against Nazi occupation and France’s collaborationist Vichy government.

The decision comes after an appeals court in Paris on Wednesday overturned a lower court’s decision not to hand back the works.

They are housed at the modern art museum in Troyes and the Cantini museum in Marseille.

The works, painted between 1907 and 1910, were taken as spoils when Gimpel was arrested.

The lower court had found there were doubts about the authenticity of the paintings, but appeals judges said there were “accurate, serious and consistent indications” that the works were the same ones taken from Gimpel.

“This is great,” said Corinne Hershkovitch, a lawyer for Gimpel’s heirs, who are still trying to recover other works in his collection.

“The court agreed on the points we put forward and we are very happy to be recognized,” she said.

Gimpel, who was of Jewish descent, was a prominent art collector in the early 20th century. Active in the Resistance, he fled Paris early in World War II and headed for the French Riviera.

He was arrested in 1944 and deported to Neuengamme concentration camp near Hamburg, Germany, where he died the following year.

Officials are now using genealogical experts and specialist researchers to trace families so objects can be returned to their rightful owners.