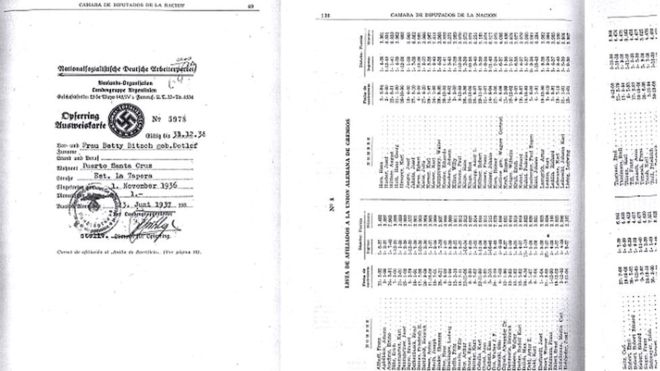 The papers may shed new light on secret Nazi wealth

Files discovered in Argentina reveal the names of 12,000 Nazis who lived there in the 1930s and many had Swiss bank accounts, researchers say.

The US-based Simon Wiesenthal Centre, famous for tracking down Nazis, has asked Credit Suisse to identify the dormant bank accounts.

"We believe that these long-dormant accounts hold monies looted from Jewish victims," the centre says.

The papers were found in a store room at a former Nazi HQ in Buenos Aires.

Nazi Germany began seizing Jewish property after enacting racist laws in 1935 and a colossal amount was stolen during the Holocaust in the 1940s. Much of that wealth was transferred to secret Swiss bank accounts.

In a letter to Credit Suisse Vice-President Christian Küng, the Simon Wiesenthal Centre says "we are aware that you already have claimants as alleged heirs of Nazis in the list".

The centre says many of the Nazis listed in the Argentinian files "contributed to one or more bank accounts at the Schweizerische Kreditanstalt, which became the Credit Suisse bank".

The lists were seized by a special commission set up under the anti-Nazi presidency of Roberto Ortiz, who ruled from 1938. The commission had raided the Nazi Unión Alemana de Gremios (German Union of Syndicates).

In 1943 another military coup put a pro-Nazi regime in power in Buenos Aires and the commission's findings were burned, but recently an Argentinian investigator, Pedro Filipuzzi, found an original copy listing the 12,000 Nazis.

In a statement to the AFP news agency, Credit Suisse says it co-operated with the Volcker inquiry in 1997-1999 to track down Swiss bank accounts that belonged to victims of Nazi persecution.

"However, we will look into this affair again," Credit Suisse said.

During and after World War Two several South American countries, including Argentina, were safe havens for Nazis, as they were run by fascist military dictators.

Some most-wanted Nazi war criminals escaped to South America, including Adolf Eichmann, a key organiser of the Holocaust. He was kidnapped by Israeli agents in Argentina in 1960 and hanged as a war criminal in 1962 after a landmark trial in Jerusalem.