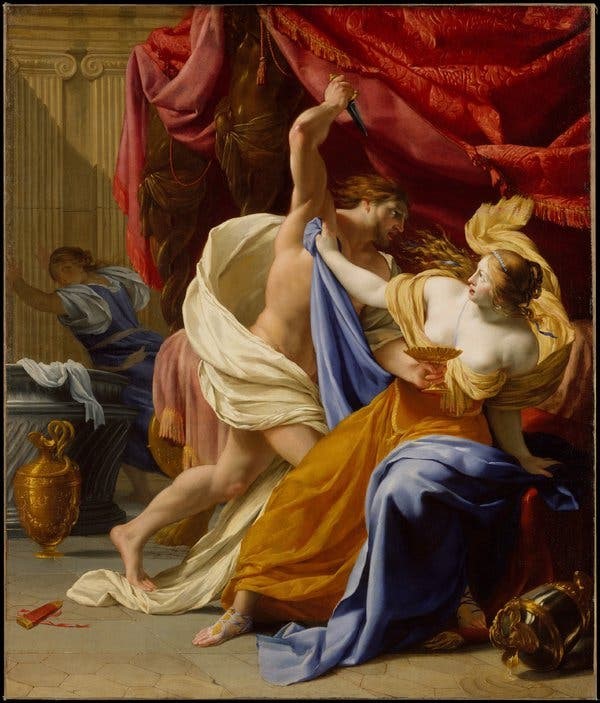 The Metropolitan Museum of Art has altered the provenance of a major painting in one of its galleries to reflect new information about the artwork’s troubled history in Germany before and after World War II.

The museum now acknowledges that the 17th-century painting, titled “The Rape of Tamar,” and attributed to the French artist Eustache Le Sueur, was owned by a Jewish art dealer, Siegfried Aram, who fled Germany in 1933 as Hitler took power.

Mr. Aram fought for decades, unsuccessfully, to reclaim the painting, which he argued had been illegally taken by a businessman, Oskar Sommer, to whom he sold his home in Germany.

The dispute over the work was brought to light by Joachim Peter, a German researcher, photographer and art instructor, who has spent years studying the history of Heilbronn, the city where Mr. Aram once lived. The discovery by Mr. Peter, who has a diploma in film studies and an art degree, became the subject of a New York Times article earlier this month.

The Met bought the painting, which now hangs in Gallery 634, from a consortium of dealers in 1984. The dealers had purchased it months earlier at auction in London where Christie’s had identified it as the “Property of a Gentleman” without additional provenance.

It had been brought to market by one of Mr. Sommer’s daughters, who inherited the painting after his death in 1966.

Experts later traced the painting back to the 18th century where they identified two prior French owners. But the painting was mistakenly thought to have been in a private collection for more than 100 years until the 1983 sale at Christie’s.

Actually, as referenced in the Met’s new provenance for the work, it was held in a private collection in Britain in the mid-1920s when Mr. Aram bought it. The painting then passed “to Sommer as a contested part of his purchase of Aram’s villa in Schapbach, Germany,” the Met said on its website.

“We updated the online provenance information, with the confirmation that the painting in dispute between Aram and Sommers was the same as the Met’s,” the museum said in a statement.

Mr. Peter relied on documents from archives in Baden-Württemberg to track the dealer’s long and unsuccessful fight for his painting. For his part, Mr. Sommer defended keeping the painting, asserting, among other things, that the property he bought was smaller than had been described.

It is unclear if Mr. Aram, who died in 1978 in the United States, has heirs. The Met declined to say whether anyone has come forward to make a claim on the painting.

Mr. Aram considered the subject of his painting to be a depiction of the “Tarquin and Lucretia” legend and he believed it had been created by the court painter for King Louis XIII of France, Simon Vouet, in whose studio Le Sueur had his early training.

It had been sold at Christie’s as “Tarquin and Lucretia” by the “Circle of Simon Vouet.” But the Met and other experts later came to believe that its subject is instead the Old Testament story of Tamar, by Le Sueur.