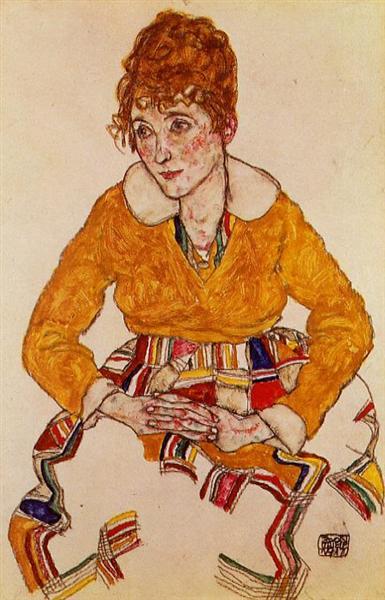 The heirs of two Holocaust victims have sued the Lehman Foundation in New York over a multi-million dollar painting, both claiming their families owned the painting before the Nazi era.

The 1917 painting by Egon Schiele, Portrait of the Artist’s Wife, was purchased by Robin Owen Lehman – the son of late the banker Robert Lehman – from the Marlborough Gallery in London in 1964. It is now estimated to be worth between $5 and $7 million.

In 2016, Mr Lehman tried to sell the painting through Christie’s auction house to raise money for his charity foundation. However, the move notified the two rival claimants to the painting’s whereabouts and all three parties have been stuck in a legal stalemate ever since.

According to the heirs of Karl Mayländer, a Jewish businessman in Vienna who was killed in Auschwitz, he owned the watercolour before he was deported to the death camp. His family trust now cites a long distant relative, 98-year-old Eva Zirkl who lives in New York, as the rightful owner of the painting.

But the family of another Holocaust victim, Heinrich Rieger, who was Egon Schiele’s dentist, believe the watercolour belonged to Mr Reiger before he was killed.

Lawyers representing Mr Lehman tried to settle the dispute in “good faith” outside of the courts, but claim that neither parties were willing to meet in person to discuss their positions.

Thaddeus Stauber, a Nixon Peabodylawyer in Los Angeles who is representing Mr Lehman in the case, told the Daily Telegraph: “We are trying to establish whether either of these claimants have a legitimate claim. Based on what they have submitted at the moment, we don’t believe either of them do.

“I reached out to all the parties individually and invited everyone to New York to try and reach an agreement in good faith. But for the past three years they have refused to talk to each other.”

The painting is currently being held in Christie’s in New York and cannot be sold until the dispute is settled.

The case is due to be heard in the coming month at Monroe County Supreme Court in Rochester, New York state, where a judge is expected to decide who the rightful owner of the piece is.

Raymond Dowd, a lawyer in New York representing the Rieger family trust, accused the Lehman Foundation of “procedural lawfare” by insisting that the case be heard outside of New York City.

“When you are a large, rich plaintiff you can afford to engage in procedural lawfare,” he said, adding that the Reiger family trust have been willing to “engage in good faith discussions”.

The legal action was originally started by the Lehman Foundation in September, when its lawyers filed court papers in an attempt to establish whether either family was telling the truth.

The Robert Rieger Trust in New York have since filed a claim on the watercolour, which they say “was always regarded as a special piece of the Rieger collection”. But The Susan Zirkl Memorial Foundation Trust, representing 98-year-old Ms Zirkl, claim that she is the rightful owner.

The case comes after Ms Zirkl was returned two other Schiele paintings from an Austrian museum three years ago, after reportedly spending two decades trying to reclaim the drawings.

Vienna's famous Leopold Museum agreed to return two watercolours, including a self-portrait of Schiele, to the New York-based heiress of Mayländer in 2016.

Lawyers representing Ms Zirkl on Saturday denied the “blatantly false” allegation that they have not engaged in good faith discussions, adding: “Mr. Lehman’s counsel is soliciting publicity to manufacture a narrative, and we will not engage in that process.”