Prewar, no countries had wanted to take in Europe’s Jews. Postwar, many were poised to claim the spoils of the murdered—until an unprecedented group of experts stepped in. 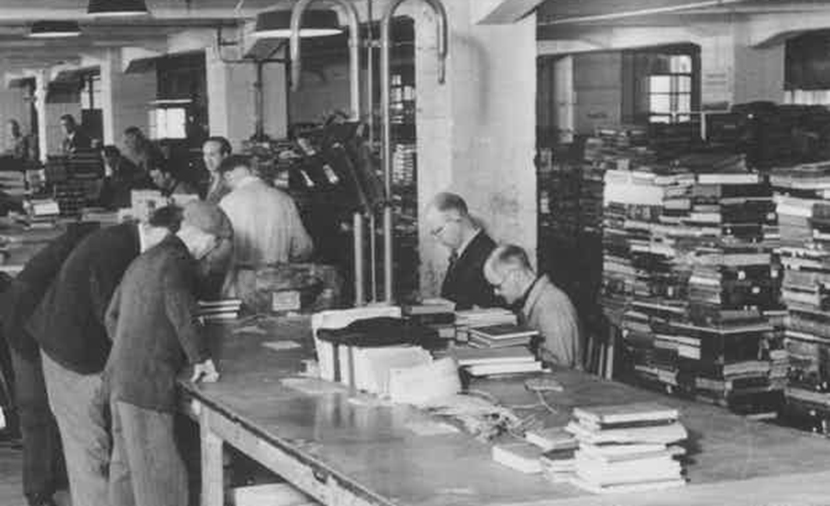 From the cover of A Mortuary of Books: The Rescue of Jewish Culture After the Holocaust by Elisabeth Gallas. NYU Press.

In the immediate aftermath of World War II, the U.S. and Allied armies deployed a team, popularly known as the Monuments Men, to locate and restore to their rightful owners huge caches of European art and cultural works that had been looted by the Nazis or, in some few cases, successfully hidden away for safeguarding.

Less well known is that this group was also assigned to salvage the material artifacts that had survived the Nazi destruction of European Jewish culture in particular: nearly three million books, manuscripts, art works, archives, Torah scrolls, ritual objects, historical records, letters, and other documents, some of them centuries old. Taken together, these formed a detailed tapestry of the history of millions of now lost Jewish lives.

But though these Jewish shards had been recovered, their former owners and heirs were mostly dead, and those who had survived were either in displaced-persons camps or had left for new lives elsewhere. To whom, then, should, could, or would these material remains of European Jewish civilization be returned?

For the Monuments Men, such questions were mostly practical. But for Jews they posed nothing less than an existential quandary. In her impressively detailed account, A Mortuary of Books: The Rescue of Jewish Culture After the Holocaust, the German scholar Elisabeth Gallas unfurls the saga of how an unprecedented consortium of Jewish organizations and individuals from around the world helped craft the answer.

The initial steps were mainly logistical: finding a space large enough not just to house but to accommodate an additional team of experts who could identify, catalogue, sort through, repair, and assess the value of so diverse and wide-ranging a miscellany whose origins and history crossed borders and centuries.

That place, located just outside Frankfurt, became known as the Offenbach Archival Depot, a concrete warehouse that had until recently belonged to IG Farben, the giant conglomerate that held the patent to Zyklon B, the Nazis’ gas-chamber poison of choice. In an irony even more bitter, the reason so many of these objects had survived at all lay in the systematic plunder of Judaica and Hebraica ordered by the Nazi ideologue Alfred Rosenberg and Reichsmarshall Hermann Goering for the purpose of an imagined postwar museum celebrating the defeat of their “racial” arch-enemy and all its works.

To those surveying the remains, the surviving objects seemed to exist in a limbo that mirrored, in reverse, the experience of so many Jews made stateless by Hitler. Prewar, no countries had been ready to welcome or take in Nazi Europe’s cast-out Jews; postwar, many of these same countries seemed ready to claim the spoils of murdered Jewry. Indeed, as Gallas shows, the protocols set by American and Allied officials called for all recovered stolen property to be returned to the European countries and communities of their origin. Strict adherence to these rules would mean that the very countries whose Jewish populations had been killed by the Nazis—and where as a result, few had survived or chosen to return—would be declared the official heirs to the very property the Nazis had seized from its Jewish owners.

In the wake of the Holocaust, such an outcome made no sense, practical or moral. But what were the alternatives? Where would Europe’s surviving Jews, the rightful legatees, migrate to now? The United States? The United Kingdom? Palestine, still under British rule? Other countries and continents where families and friends had fled or settled prior to the Holocaust? Having been stripped by Nazi law of any citizenship status, European Jews had no state or country to represent their interests, and therefore, at best, limited legal recourse even to reclaim their own communal possessions.

Protest arose immediately from any number of Jewish organizations, alliances, and groups from around the world—so many, that Gallas includes a list of names and abbreviations to help keep them straight. With the beginnings of the cold war, and the Soviet Union’s growing anti-Semitism, all were especially alarmed by claims for ownership being put forward by the USSR and its satellites, fearing that materials related to Jewish history would either disappear or become unavailable to Western Jewish scholars.

Those concerns prompted a counterproposal: treat Jewish property as a separate class, sui generis, to be claimed and shared by a collective Jewish entity that would embrace all Jews everywhere. Ownership would thus be based not on prewar territorial boundaries, as the Allies had proposed, but vested in the Jewish people as a whole, and then “claimed by an agency entrusted with representing that people.”

Among this idea’s leading proponents were Salo W. Baron and Hannah Arendt. Baron, an eminent scholar of Jewish history at Columbia University, had become involved during the war with an organization, later known as Jewish Cultural Reconstruction (JCR), which in the end would become the trustee for the cultural property and oversee its distribution. In this enterprise he had enlisted Arendt, the political philosopher who in 1941 had succeeded in fleeing Europe for America and for whom Hitler’s near-annihilation of European’s Jews now underscored a need for collective Jewish action and response.

Also backing the idea was Gershom Scholem, the German-born philosopher and historian of Judaism who had settled in Mandatory Palestine in the 1920s and had become involved in various restitution groups, including JCR. As a Zionist, Scholem advanced the aim of sending as many surviving objects as possible to the future homeland of the Jewish people in Palestine, strengthening the existing institutions of learning for the future generations he foresaw settling in the land.

Another supporter was Lucy S. Dawidowicz, the future historian of the Holocaust who was then known by her maiden name Schildkret. A New York-born daughter of Polish immigrants, she was not directly involved in these negotiations, but her ongoing association with the YIVO Institute for Jewish Research, now headquartered in New York, had made her acutely aware of the necessity for preserving the memory of the pre-Holocaust Jewish experience in Europe for the sake of a vibrant Jewish future.

Dawidowicz had worked for YIVO in 1938-1939 at its original location in Vilna, returning hastily to the U.S. just before the onset of war. In 1946, she returned to Europe under the auspices of the American Jewish Joint Distribution Committee in order to assist Jewish survivors in displaced-persons camps. That job took her to the Offenbach Depot in search of books and other reading materials. In the process, she located 347 cases of materials from YIVO’s Vilna offices and was able to help in the restitution of these and other materials to YIVO in New York. It was she who dubbed the depot “a mortuary of books,” one in which every object constituted “a testament of a murdered civilization.”

Clearly, the strength of support from Jewish organizations, combined with the sheer facts and horror of the Holocaust, persuaded the Allies-led team first to accept the JCR as the representative of the Jewish people best entitled to receive the Offenbach materials and then to work along with it in seeing to their distribution. Ultimately, as Gallas documents, everything was parceled out to venues, approved by and in conjunction with JCR, in the U.S., UK, Palestine, and elsewhere. Her partial list includes “the National Library of Israel, Yad Vashem, and the present-day Israel Museum in Jerusalem; the Leo Baeck Institutes in Jerusalem, London, and New York; YIVO, Yeshiva University, and the Jewish Theological Seminary in New York; the Wiener Library in London; and the Centre de Documentation Juive Contemporaine in Paris.”

Nevertheless, disagreements continued over who, precisely, would get what, and Gallas meticulously chronicles the seemingly non-stop bickering and bargaining among the parties. Although the minutiae can grow tedious, she also uncovers some fascinating tales of skullduggery, one of them featuring Gershom Scholem.

In late 1946, impatient at the Allies’ tardy decision-making and eager to secure Offenbach’s most important rabbinic documents for Palestine’s Hebrew University, the towering scholar of Jewish mysticism organized a secret transport of five crates filled, Gallas reports, with, among other items, “Hebrew-language rabbinical literature of the 18th and 19th centuries, including responsa, prayer texts, legal texts, Talmud manuscripts, commentaries, and exegetical writings from all over Europe.” The illegal shipment caught the attention of the Americans only after it had arrived in Haifa. Eventually, the contents were transferred to Jerusalem’s Jewish National and University Library, and Scholem and his collaborators suffered minimal repercussions.

This anecdote is only one of many intriguing tidbits in Gallas’s comprehensive tale of the post-Holocaust fate of looted Jewish property. Unfortunately, that tale is so complex, and so stuffed with detail, that in attempting to capture its entire arc she sometimes gets bogged down or repetitive, and her writing—perhaps in part because it is translated from the German—can also turn gnarly.

Still, hers is probably the most thorough and scholarly account of an episode that in recent years has also inspired books on specific aspects of it by Mark Glickman (Stolen Words: The Nazi Plunder of Jewish Books, 2016); David Fishman (The Book Smugglers: Partisans, Poets, and the Race to Save Jewish Treasures from the Nazis, 2017); and Dan Rabinowitz (The Lost Library: The Legacy of Vilna’s Strashun Library in the Aftermath of the Holocaust, 2018). Most eloquent of all is Dawidowicz’s earlier personal history, Of That Place and Time, a Memoir 1938-1947 (1989).

Indeed, one might wish that the role played by what can only be described as the All-Star Jewish intellectual dream team of Scholem, Baron, Arendt, and Dawidowicz had received even fuller treatment by Gallas. Although all four “regarded their shared rescue mission as an existential duty,” she writes, “[t]he four scholars differed fundamentally in terms of their generations, background, self-image, and political vision.” Very true; an entire volume could be devoted to their particular roles and the impact the experience left on each of them.

In this connection one thinks especially of Dawidowicz (1915-1990), the youngest of the four, who would go on to become the author of The War Against the Jews (1975) and other indispensable writings about the Holocaust and its interpretation by later historians and educators. After reading Gallas, it’s impossible not to see Dawidowicz’s own influential work as another element of the team’s enduring gift of restitution and memorialization, a gift for which the Jewish people today owe a collective debt of thanks.