Hitler Looted the Art, Then They Looted Hitler

New research is helping the hunt for missing art, largely amassed by Hitler, then re-stolen by desperate Germans in the closing days of the war. 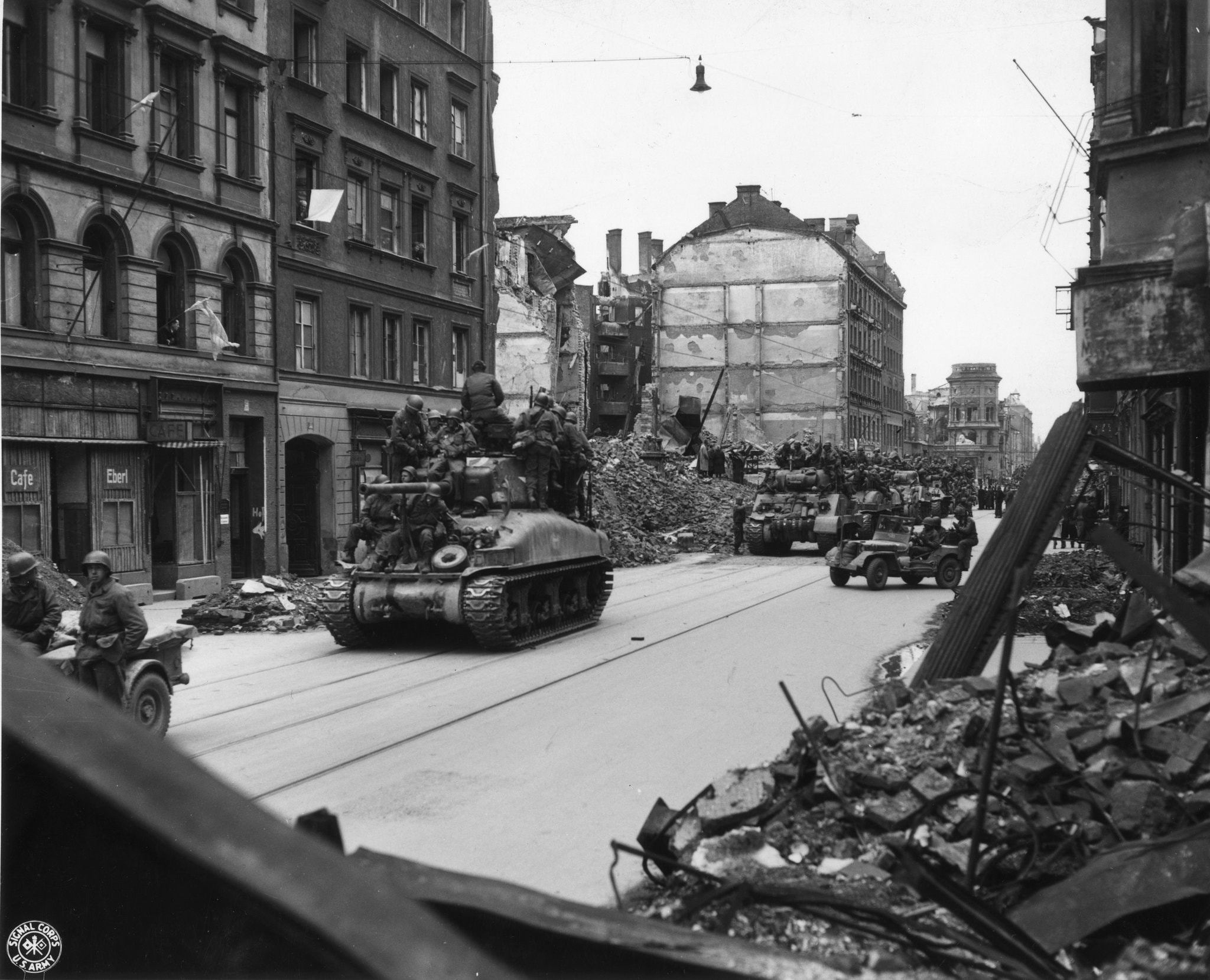 Allied tanks move into a heavily bombed Munich on April 29, 1945. Knowing that the American troops were closing in, residents began looting earlier that day, taking food, furniture and parts of Hitler’s art collection.

Chaos reigned in the bomb-ravaged streets of Munich on April 29, 1945. American troops were closing in. Hitler was a day away from killing himself in his bunker in Berlin. The Nazi guards who protected important buildings had fled.

Hungry crowds stormed the Führerbau, the Führer’s building. First they looted the food, the liquor and the furniture. Then they turned to the air-raid cellar, which was filled with art, climbing over piles of Panzerfaust anti-tank grenades to get at the paintings.

"By the end of the second day", Edgar Breitenbach, an art intelligence officer in the United States Army, wrote in a 1949 report “when the looting was finally stopped, all the pictures were gone.”

It was a moment of incongruity: Hitler, the man who turned the illegal seizure of art into a national trade, had his own plunder ransacked.

Now the Central Institute for Art History in Munich has conducted the first comprehensive investigation into the fate of the art that was stored in the Führer’s building and the adjacent Nazi headquarters.

A lot of it had been ferried there by dealers who scavenged for art across occupied Europe to help fill Hitler’s planned “Führermuseum” in Linz, his hometown. Most of those works were already stored in Austrian salt mines to protect them from bombings.

But the Munich buildings still held some 1,500 works, the researchers found, and at least 700 were looted in the two-day spree; many more than previously thought. Much of the art was already stolen property, having been confiscated by the Nazis from Jewish collections. Hundreds of the works stored there, for example, had been taken from the family of Adolphe Schloss, a French Jew who had collected the Dutch and Flemish old masters that Hitler revered.

In the aftermath of the looting, the authorities were able to recover almost 300 paintings, many in the weeks after the plunder. Some were found buried in a nearby potato patch. In 1948, 30 paintings were found in a house a few minutes’ walk from the Führerbau. 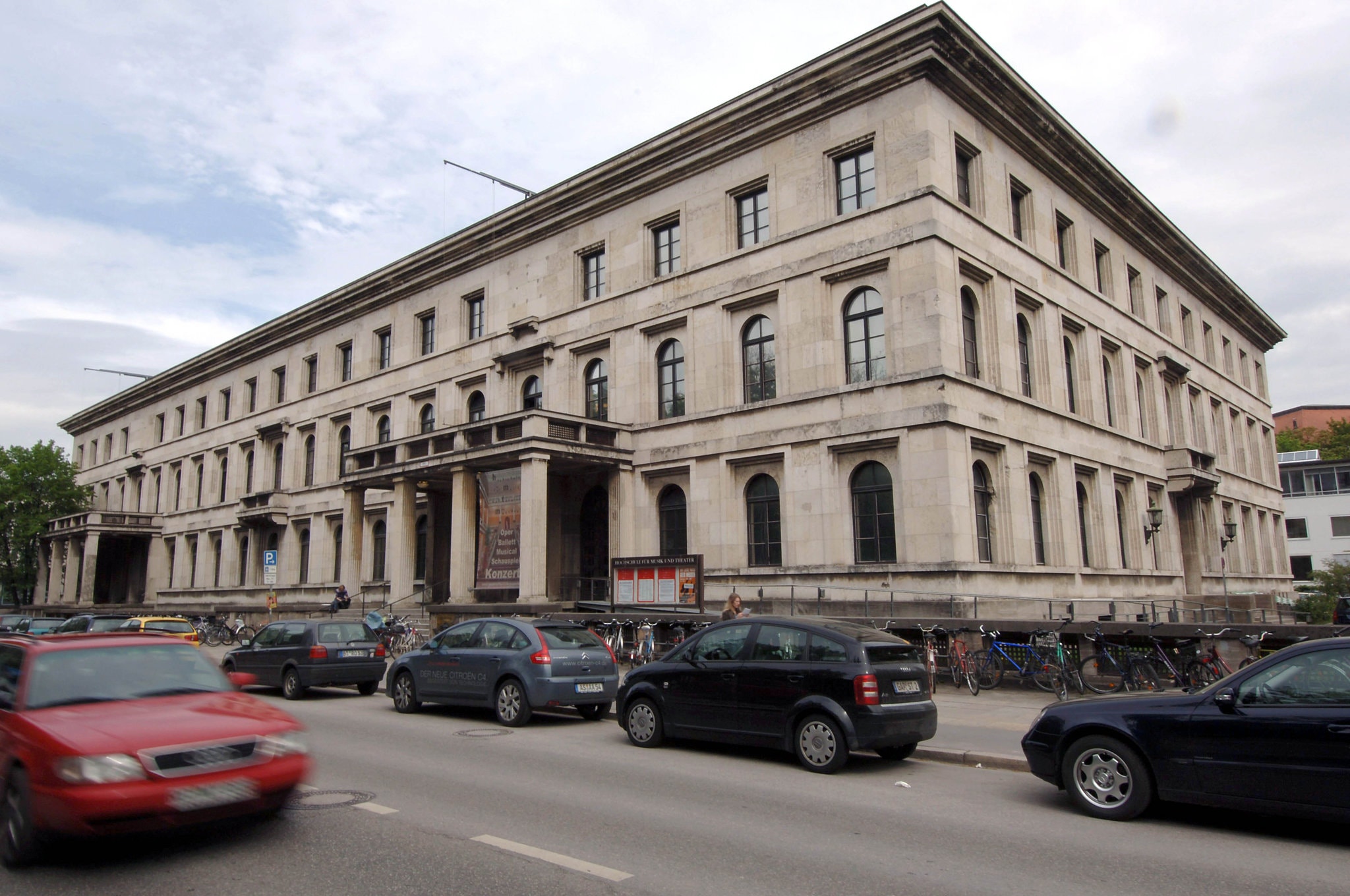 The Führerbau, where Hitler kept an office, was stormed by crowds after the Nazis fled Munich in the waning days of World War II.

The recovery work was aided by the so-called Monuments Men, officers of the Monuments, Fine Arts and Archives unit of the United States Army, but there were not enough of them to trace so many missing objects.

And in the decades that followed, German officials did not do much to track the more than 400 works still missing, perhaps sheepishly avoiding making a state claim to objects that had been stolen by their predecessors in the Third Reich.

Now, though, the German government, spurred by the new research, is making a serious effort toward finding the works.

It is belatedly reporting the 1945 thefts, painting by painting, to Interpol and to the German Federal Criminal Police Office, and is also listing them on the Art Loss Register and lostart.de, two databases of missing art.

It is hoping that by posting details about the missing artworks, it will alert dealers to art that may have been looted from Jews, and possibly result in its return.

So far, the research has managed to find traces of some three dozen of the missing works. One is in the Fisher Museum of Art at the University of Southern California, which discovered 14 years ago that a painting in its collection had been looted from the Führerbau. 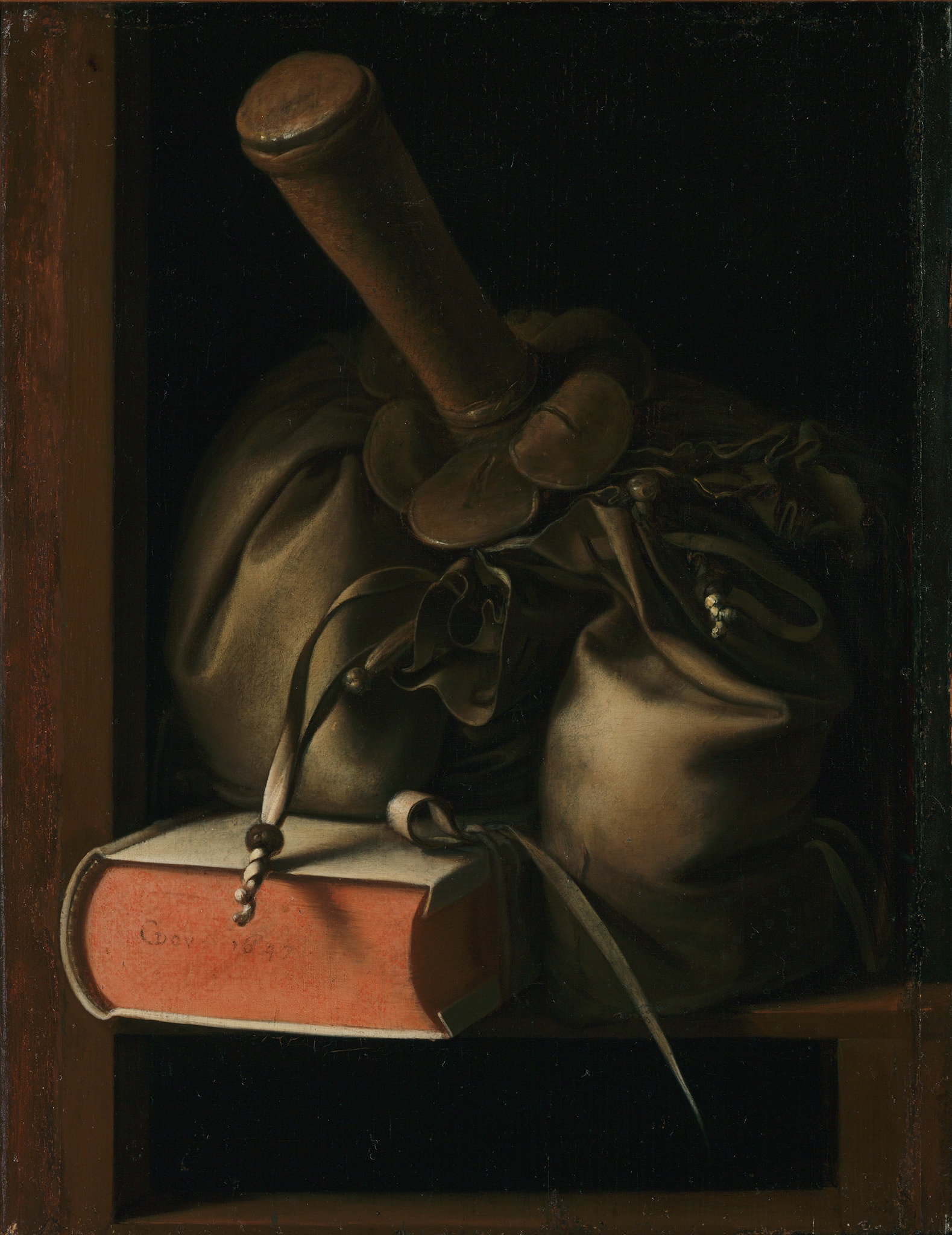 Gerard Dou, “Still Life With Book and Purse,” painted in 1647, is held by the Fisher Museum of Art at the University of Southern California.

"We are always interested in receiving more information about the pieces in our collection that might be in any way problematic,” Selma Holo, the executive director of USC Museums, wrote in an email. The museum, she said, “will always do the right thing with respect to its holdings.”

One obstacle to the full restitution of works, even when they are found, is a principle of German law known as Ersitzung. It dictates that someone who acquires an item in good faith and possesses it for 10 years becomes the rightful owner. So in Germany, even in cases where the government seeks to restitute a work it has found, it can be difficult to dislodge it legally from a collector who bought it without knowledge that it was stolen.

Stephan Klingen, an art historian involved in the research project, said he would like the government, in such situations, to consider buying the works.

It would be good if the government would take responsibility, acquire the works, do the provenance research and restitute where necessary,” he said. “This would also help the current holders, who may have purchased the works in good faith, but will now find them difficult to sell.”

The German government remains the owner of record for the hundreds of works that were, despite the U.S. Army’s first impression, left behind by the Munich looters in 1945. Since 2000 the government has restituted 54 of those works after concluding that they had been stolen from Jews.

Other efforts have been less successful.

Mr. Klingen said that in 2009 he spotted a painting by Frans Francken the Younger, “The Sermon on the Mount,” on the German TV equivalent of “Antiques Roadshow.” He recognized it as a work that had been destined for the planned museum in Linz and had been stolen from the Führerbau. He alerted the police.

There were some indications that the work had been seized from a Jewish collection, but they were far from conclusive. So the court returned it to the last holders of the painting, the descendants of a man, the caretaker of a German army barracks, who had lived in Munich in 1945. The court ruled that the heirs did not know it had been stolen, and thus were entitled to possess it through a good-faith inheritance under the Ersitzung rule.

From the disappointment of that effort was born the Central Institute for Art History’s decision to do extensive research into the entire set of works still missing from Munich. 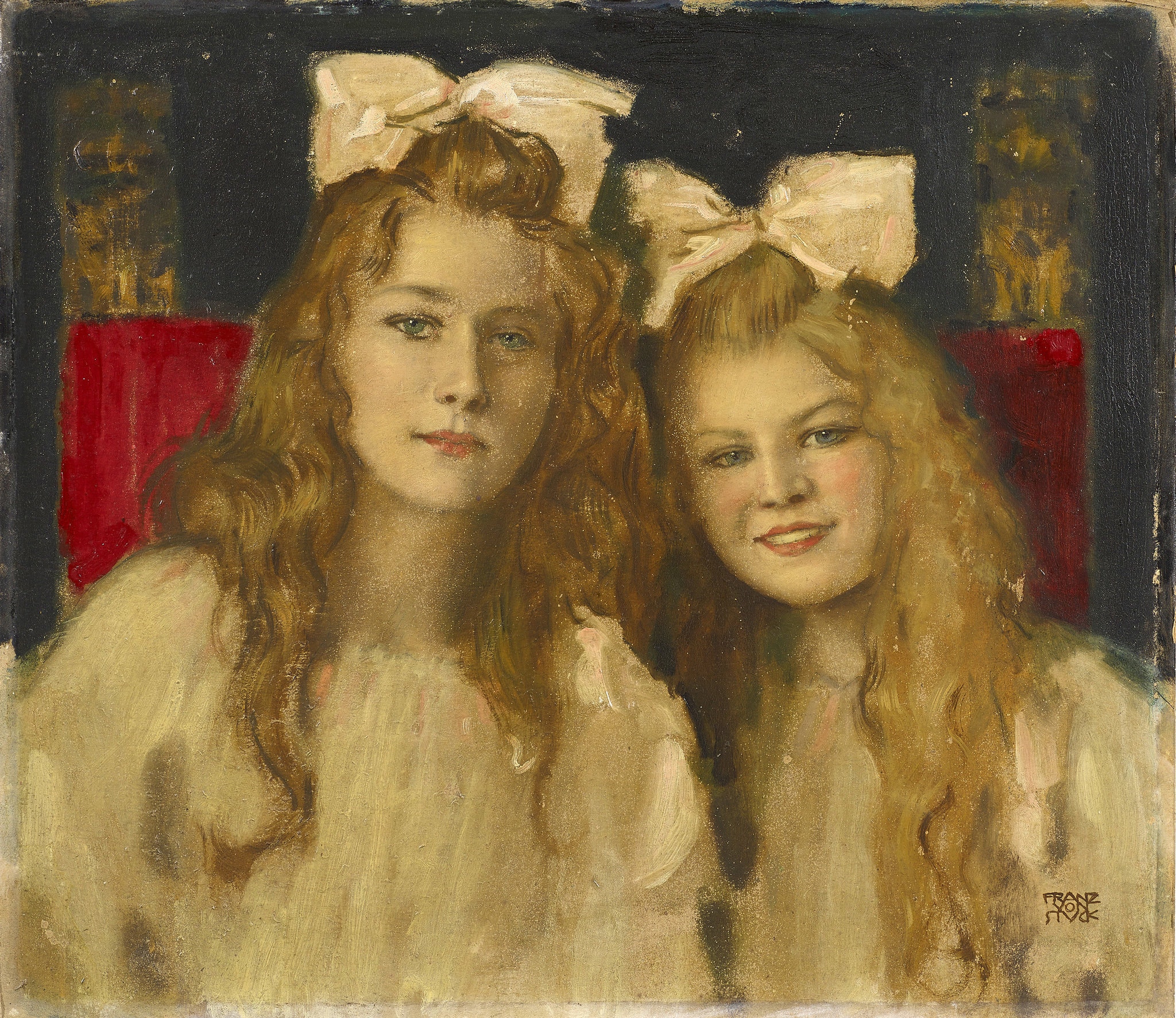 Franz von Stuck’s “Portrait of Two Young Girls,” had been scheduled to be in the collection of Hitler’s planned museum in Linz, but was stolen from him at the end of the war. Credit Van Ham

“These works surface sporadically at auction, and it is likely more will come up,” Mr. Klingen said. “We think it is important to raise awareness of their history and develop a policy for dealing with them instead of starting from scratch each time one emerges. The legal environment is not favorable for restitution to the heirs of the original owners.”

In a case from 2017, the government tried to intervene when a portrait of two girls by Franz von Stuck that was destined for Linzappeared in a catalog for an auction in Cologne.

The government persuaded the auction house to withdraw it from sale so researchers would have time to examine the provenance. But they found no evidence that the painting had been looted from a Jewish collection and the private collector held good title to the work under the Ersitzung rule. So the sale to another private collection went forward. Down the road, if it emerges that the work was indeed looted from a Jewish collector, experts say it may prove difficult to find again.

As the decades pass, it is certainly true that multiple transfers and legal complexities in varying jurisdictions make it increasingly hard to trace looted art and to resolve tangled questions of ownership.

Mr. Breitenbach, the Army intelligence officer, saw the steep road ahead when, writing in 1949, he wondered whether much of this belated detective work could have been avoided with just a few minor bribes in the desperate days at the close of the war.

“It’s a pity,” he offered, “that Army regulations at that time did not permit the use of rewards in the form of food and cigarettes. This would almost certainly have been instrumental in recovering considerable parts of the stolen collection.”