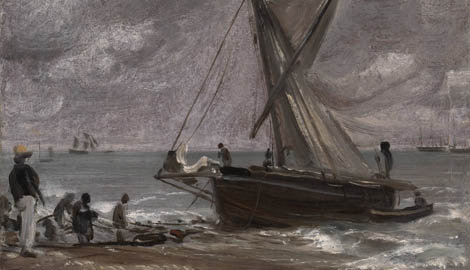 Fragment from Beaching a Boat, Brighton 1824, by John Constable, which was returned to its original owner by the Tate in 2015"

Legislation has been passed to repeal the cut-off date for Holocaust -era restitution claims to national museums and galleries.

Proposed by the Conservative MP Theresa Villiers last year, the Holocaust (Return of Cultural Objects) (Amendment) Bill removes a sunset clause in the original 2009 legislation that would have seen it expire on 11 November 2019.

The legislation gives national institutions the power to deaccession objects from their collections found to have been spoliated during the Nazi era.

The private member’s bill had failed to make it through a second reading on two occasions and there was some concern that it would not pass in time for the November deadline. However, it passed its third reading with no changes last week and received Royal Assent on 4 July.

"It is rare for a private members bill to make it on to the statute book, which demonstrates the strong support for these measures in parliament,” said Mark Caldon, the senior policy advisor at the Department for Digital, Culture, Media and Sport.

The 2017 London Spoliation Conference, the establishment of a Network of European Restitution Committees on Nazi-looted art, and now the coming into force of this act are all significant milestones within the spoliation agenda and demonstrate that the UK is committed to increasing efforts to identify and return Nazi-looted art."

The bill has been welcomed by stakeholders including the National Museum Director’s Council and the Commission for Looted Art in Europe.

The act has been used to deal with a small number of restitution claims since it passed in 2009. In 2014, three Meissen figurines were returned by the Victoria and Albert Museum to the heirs of the Jewish art collector Emma Budge, and in 2015 the Tate returned a John Constable painting, Beaching a Boat, Brighton (1824) to an anonymous claimant.

The Network of European Restitution Committees, which is overseen by the French Commission for the Compensation of Victims of Spoliation, is due to hold an international conference in Paris in November this year.