An appeals court in New York upheld a ruling that returned two drawings by Egon Schiele to the heirs of a Viennese cabaret performer. 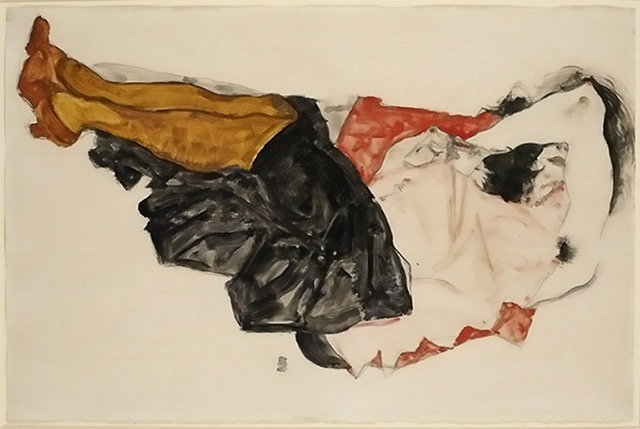 “Woman Hiding her Face,” by Egon Schiele, was owned by a popular cabaret performer in Vienna, who later died in a Nazi concentration camp

In a restitution case that was closely watched in the art world, a New York appellate court has upheld a ruling that returned two prized Egon Schiele drawings to the heirs of Fritz Grünbaum, a Viennese cabaret singer whose large art collection was confiscated before he was murdered in a Nazi concentration camp in 1941.

The unanimous ruling by the five-judge panel, issued Tuesday, means that Timothy Reif and David Frankel, Mr. Grünbaum’s heirs, can keep possession of the two Schiele artworks, “Woman in a Black Pinafore” (1911) and “Woman Hiding her Face” (1912), that were part of Mr. Grünbaum’s 449-piece art collection.

The two works had been bought by a London art dealer, Richard Nagy, six years ago. But they were returned to the heirs last year after a ruling by a New York state court judge, Charles J. Ramos. Among the legal justifications he cited were the new provisions of the Holocaust Expropriated Recovery Act, a federal law enacted in 2016 that eased statute-of-limitations restrictions for the recovery of artworks stolen during World War II.

In upholding the ruling, Appellate Division judges for Manhattan and the Bronx wrote that their decision was also “informed by the intent and provisions” of the HEAR act, though they relied principally on the finding that the heirs had a better claim to the works because the evidence indicated Mr. Grünbaum had clearly owned them before the war and had never voluntarily transferred title.

“The tragic consequences of the Nazi occupation of Europe on the lives, liberty and property of the Jews continue to confront us today,” the judges wrote in their ruling.

In addition to being a well-known Viennese performer, Mr. Grünbaum was also a vocal critic of the Nazis. For years, his heirs have argued in courts and elsewhere that the Nazis stole the collection, which included 81 Schieles.

The higher court agreed that Mr. Grünbaum had not voluntarily parted with his collection, despite signed documents, including a power of attorney supposedly given to his wife, and that essentially the Nazis had stolen it from him before his imprisonment. “We reject the notion that a person who signs a power of attorney in a death camp can be said to have executed the document voluntarily,” the judges wrote.

Raymond Dowd, a lawyer for the heirs, said: “They are thrilled that the memory of Fritz Grünbaum is being properly honored.”

Mr. Dowd said the two artworks, with a value he estimated at roughly $7 million, are now at Christie’s and are to be sold at auction in November, barring further appeals.

Thaddeus Stauber, the lawyer for Mr. Nagy, the art dealer, said his client was undecided about whether to pursue the case further in court. In a statement, Mr. Stauber said that while he was pleased the lower court did not find that his client had “acted improperly” in obtaining the artworks in 2013, he was disappointed that the Appellate Division did not allow “a trial on the merits here” and had “instead disregarded the careful expert reports commissioned from respected provenance experts.”

The appellate panel rejected the argument, long made by Mr. Nagy and others in court, that while the Nazis inventoried the drawings, they never actually seized them, and that they had ended up in the possession of Mr. Grünbaum’s sister-in-law, Mathilde Lukacs. She was said to have then sold them to Eberhard Kornfeld, a Swiss art dealer, after the war.

Mr. Kornfeld published a catalog of Schiele artworks in 1956, including both “Woman in a Black Pinafore” and “Woman Hiding her Face,” but it made no mention of Ms. Lukacs in the chain of provenance for any of the artworks. He said in a 2007 deposition in a separate restitution case that he had no idea the works had once belonged to Mr. Grünbaum.

All the Schiele artworks in Mr. Kornfeld’s 1956 show were later sold to a single American dealer, Otto Kallir, before being sold off to a variety of other people.

When the provenance of some of the Schieles came to be challenged, Mr. Kornfeld testified in 2007 that he had purchased the works from Ms. Lukacs. He presented various documents to support that account. But the heirs have dismissed the documents as forgeries or after-the-fact creations in court papers, and neither the lower nor appellate courts treated them as substantial evidence.

“We note that there are no records, including invoices, checks or receipts documenting that the Artworks were purchased by Kornfeld from Mathilde,” the appellate judges wrote. “Moreover, even if Mathilde had possession of Grünbaum’s art collection, possession is not equivalent to legal title.”