Germany to return Nazi-stolen painting Vase of Flowers to Italy

April
BBC 29 June 2019
Germany says it will return a painting stolen by Nazi troops from the Uffizi Gallery in the Italian city of Florence in 1943.

Vase of Flowers, estimated to be worth millions of euros, has been in the hands of a German family.

In January Uffizi head Eike Schmidt said Germany had a "moral duty" to help bring it back to the museum.

Dutch master Jan van Huysum painted the still life and it was first displayed in Florence in 1824.

German troops stole the work as they retreated north during World War Two.

Why did it take so long to return?

The painting resurfaced in 1991 following German reunification, but efforts to return it failed.

The unidentified family had demanded up to €2m for the painting, reports said, while the German authorities had cited a statute of limitations on crimes more than 30 years old that it said prevented it from intervening.

But after Mr Eiche's call for the painting's return, the German government contacted the descendants of the Nazi soldier who took it. 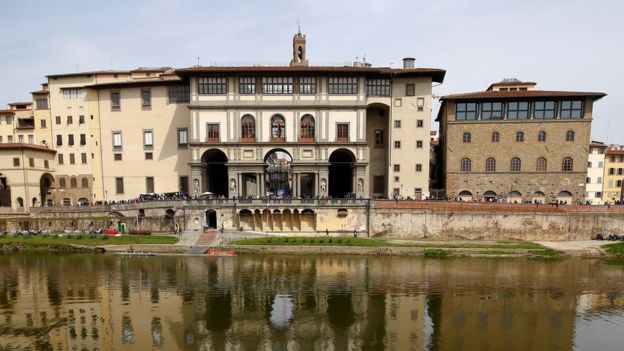 The authorities said the painting had not been looted as part of organised Nazi persecution but had simply been stolen. This, lawyers argued, meant that the soldier who took it could not be seen as its owner and did not have the right to bequeath it to anyone, Die Zeit newspaper reported.

Lawyers for the family meanwhile argued that the soldier had simply bought it at a market to have something nice to send to his wife, whose home had been bombed.

No details of the agreement reached between the German government and the family have been released.

What happened to the Vase of Flowers?

According to the gallery, Grand Duke Leopold II of Tuscany originally bought the work at the start of the 19th Century.

It was on display for over a century alongside works by other Dutch masters but was evacuated to a nearby village when Italy joined the war in 1940.

German troops then seized it with other paintings as they moved north in 1943 following the Allied invasion of Italy.

A black and white photo of Vase of Flowers has been hanging in the gallery - inscribed with the word "stolen" in English, German and Italian - during the wait for the original's return.

Mr Schmidt - himself German - has called on Germany to abolish the statute of limitations on works stolen by the Nazis so all looted art can return to its "legitimate owners".