Berlin auction house Grisebach posted an auction record for the Swiss artist Karl Stauffer-Bern (1857-91) on May 29 when it sold a self-portrait which had been recently restituted to the family of its original Jewish owners. 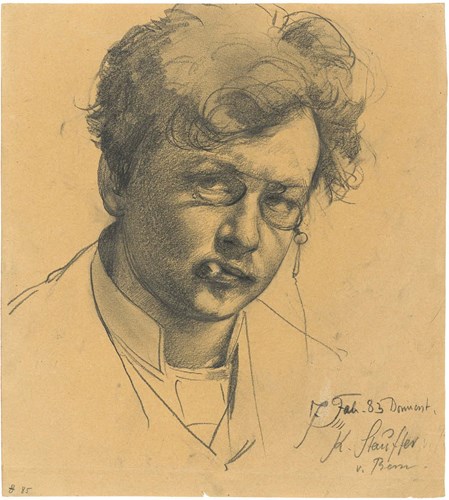 The signed 10 × 9in (26 × 23cm) pencil sketch on brown paper titled Selbstbildnis mit Zigarette (Self-portrait with cigarette) had been in a Swiss museum for over 70 years before it was returned to the family last year.

Works by the artist, who later suffered a nervous breakdown and committed suicide, only occasionally appear for sale, with the previous record set in 1992 for Sfr20,000 at Koller of Zurich.

The powerful drawing came with an emotive history. It is inscribed on the verso Rud. Mosse Leipzigerplatz 15 for Rudolf Mosse (1843-1920), a wealthy Berlin publisher whose impressive collection of German art was displayed at the ‘Mosseum’, a neo-baroque, three-story townhouse overlooking Leipziger Platz.

In 1912 he was deemed the second-richest man in Prussia but by 1933 his son-in-law and heir Hans Lachmann-Mosse had fled to France and the family’s art collection was seized.

It was auctioned off the following year by a Nazi-appointed trust under the auspices of dealer Karl Haberstock. Remarkably the buyer at the time was another Jewish entrepreneur, Julius Freund (1869-1941). He too left Germany, for Switzerland, and when his collection was sold in Lucerne after his death, this drawing was acquired by the Winterthur Kunstmuseum, near Zurich.

It remained there until 2018 when it was located by the Mosse Art Research Initiative, a project aimed at tracking down looted artworks, and restituted the painting to the Mosse heirs who chose to offer it for sale.

On the day, five Swiss, three German, two British and two US bidders competed way above the estimate of €2500-3500. Dramatic competition eventually came down to two Swiss bidders and it was finally knocked down at €115,000 (£101,455).