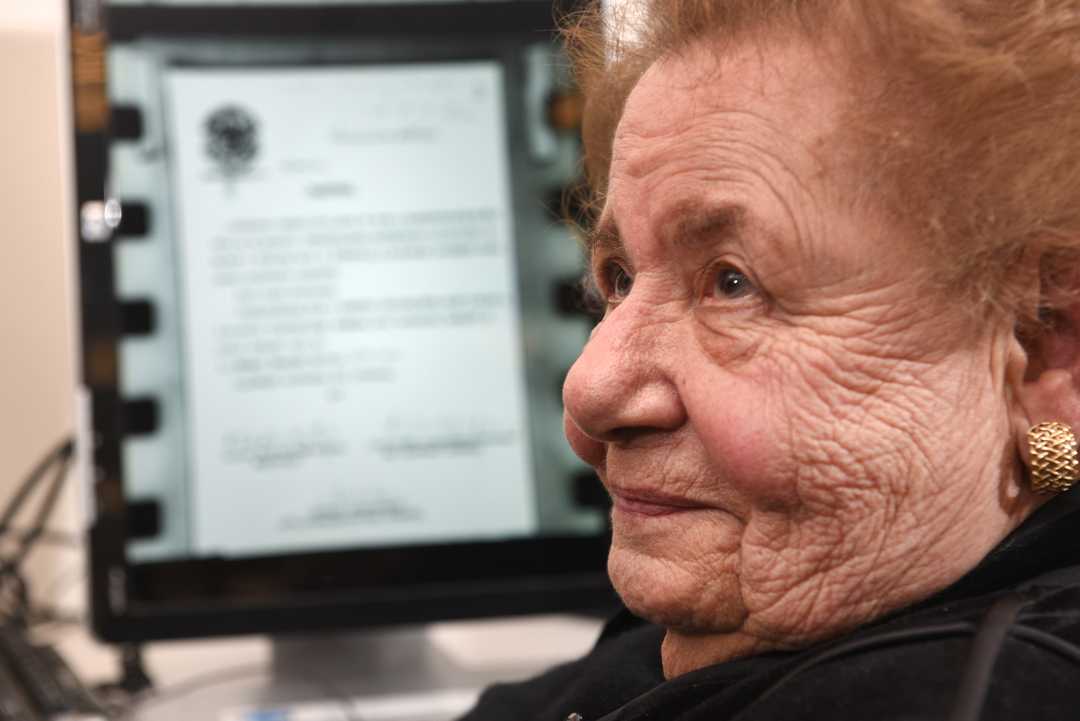 Clara Garbon-Rednoti, a Holocaust survivor, examines and reads documents on micro-film in the library of the Holocaust Memorial Museum in Farmington Hills

Clara Garbon-Radnoti has painful memories of the Holocaust, which claimed the lives of more than 6 million European Jews during World War II, including more than 500,000 from her native Hungary.

Among them were her father, her sister and 31 first cousins. Garbon-Radnoti, who was a teenager, said she escaped by hiding in 22 places around Hungary as the Nazis and their Hungarian supporters hunted for Jews to deport to death camps.

Garbon-Radnoti, 89, will say little else about her horrific recollections, keeping them locked inside her heart and memory. But she's playing an important role in helping Holocaust victims and family members find and recover artwork stolen from them in Hungary.

The Oakland County resident is using her ability to read an ancient form of the Hungarian language to decipher government records, maintained on decades-old microfilm, that document actions taken against Hungary's Jews by that country's pro-Nazi regime during World War II, including the confiscation of prized paintings and other possessions from Jewish families.

Every week for the past decade, Garbon-Radnoti has sat at a table in the library of the Holocaust Memorial Center in Farmington Hills and gone through reels of microfilm, poring over the records kept by the Hungarian government.

As part of her work, she created an online database of the documents, which detail how Hungary's Jews were systematically stripped of their rights and forced into unpaid labor and concentration camps.

Two years ago, Garbon-Radnoti found records that specifically listed artwork taken from the homes of Hungarian Jews. The discovery is key to efforts by a local lawyer's organization to track down paintings and other possessions stolen from Jewish families.

"I almost shouted," Garbon-Radnoti said. "'Come here, look at what I found.'"

Considered the "greatest displacement of art in human history," the stolen and looted art is estimated to include about 300,000 pieces scattered around the globe.

"It's a tremendous, tremendous job," she said. "You have to go through every one of the files to find those. It's such a vast material."

She's passionate about her work, saying she is helping answer critical questions about what happened during one of history's darkest periods.

"People in the United States want to know who were my ancestors? What happened to them," she said.

As the number of living Holocaust survivors dwindles to elderly people in their 80s and 90s, Garbon-Radnoti's work has taken on a sense of urgency.

"The clock is ticking," said Jonathan H. Schwartz, the attorney who is helping track down the rightful owners of looted artwork. "None of these are easy cases."

Schwartz also has a personal connection to the Hungarian documents. His grandparents are from Hungary.

Under a U.S. law enacted in 2016, families have until January 2027 to file documents to get back their family's artwork.

It was sheer serendipity that Schwartz, a partner at the Metro Detroit law firm Jaffe Raitt Heuer & Weiss, found out about Garbon-Radnoti's work when he called the Holocaust center last month as part of his effort to organize lawyers, historians and others to help local Jewish residents who think their family's artwork or other valuables were stolen during the war.

The center is trying to find and recover paintings that include works by legendary artists such as Van Gogh, Goya, Gauguin and Klimt.

"There's families that have been wiped out  ... there's language differences ... there's provenance difficulties in tracing this art," said Schwartz, who is president of the Jewish Bar Association of Michigan. "There have been countries like Hungary which have been extremely recalcitrant and refused to return this artwork so it's a real sticky wicket, to say the least."

"And with the clock ticking and with survivors passing away and with memories fading and with such an injustice having occurred, I felt personally compelled to do something about it," he said. "This resonates with people. They understand the injustice."

"It's an entire trail of the theft of the cultural heritage of the Jewish people of Hungary," he said. "It is some of the most smoking gun evidence I've ever seen. Having this amount of documents that haven't been looked at much is very rare."

Schwartz is organizing the effort locally as part of the Holocaust Art Recovery Initiative, a joint project of the Arts, Communications, Entertainment and Sports Section of the State Bar of Michigan, and the Jewish Bar Association of Michigan, along with several other individuals and organizations assisting with the efforts.

The effort to track stolen property resonates especially with those whose relatives died at the hands of the Nazis.

In reviewing documents, Garbon-Radnoti said she stumbled on the name of her widowed aunt and saw information listing some of the family's possessions.

"I recognized the name and the address right away," she said. "One rolling pin, four kitchen chairs, one kitchen table and so on and so forth. It was shocking for me."

Garbon-Radnoti's aunt was deported along with her young daughter to a concentration camp. Both died in detention.

Only Garbon-Radnoti's cousin, who was away at school in Budapest, survived; he lives in Israel. "When I found this, I sent a copy to him," she said.

Clara Garbon-Rednoti, a Holocaust survivor, examines and reads documents with attorney Jonathan H. Schwartz using a micro-film machine in the library of the Holocaust Memorial Museum in Farmington Hills on Thursday, January 10, 2019.

It's challenging enough to document ownership of paintings from decades ago, but the families of Holocaust victims face other obstacles in recovering looted artwork, including resistance from museum officials who don't want to cede parts of their collections.

In one of his last acts in office, President Barack Obama signed the Holocaust Expropriated Art Recovery Act, which erodes legal technicalities that art museums have employed to fend off claims from Holocaust survivors.

The Toledo Museum of Art and New York's Metropolitan Museum of Art have denied challenges to the museums' possession of allegedly looted artwork.

The Detroit Institute of Art prevailed in a lawsuit filed by the heirs of a German woman over the Vincent Van Gogh painting "Les Becheurs," also known as "The Diggers."

The woman, Martha Nathan, sold the painting in 1939 to a Swiss art dealer for $9,360 — a sale the family claimed occurred under duress because of Nazi persecution. In 1941, the Swiss dealer sold the painting to Detroit art collector Robert Tannahill for $34,000.

After Tannahill's death in 1969, the Van Gogh painting was donated, per the wishes of Tannahill, to the DIA. After the war was over, Nathan tried to recoup her losses and get the paintings back before her death in 1958.

Forty-one years later, the DIA posted artwork with the Nazi-era provenance on its website in conforming with guidelines issued by the American Alliance of Museums. Nathan's heirs contacted the DIA in 2004, insisting they were the rightful heirs to the Van Gogh painting.

Schwartz said the task of tracking down looted artwork will be arduous because people in countries across the globe have not done "the right thing" in the past and are not willing to do it now.

"As part of this initiative, I want to help as many people as I can get in touch with researchers, historians, genealogists and if they need legal help, then finding them attorneys who will help them get this artwork back," he said.

"But seeing all these documents  ... it's a way to help not just one person it's a way to help entire Jewish communities ...large populations of people who were exterminated during the Holocaust," Schwartz said. "It's so important for so many reasons."

Eli Mayerfeld, CEO of the Holocaust Memorial Center's Zekelman Family Campus, said Garbon-Radnoti's discovery and her work to decipher Hungarian government documents "gives us a chance to bring some dignity back to those who were lost and to those who survived but lost everything."