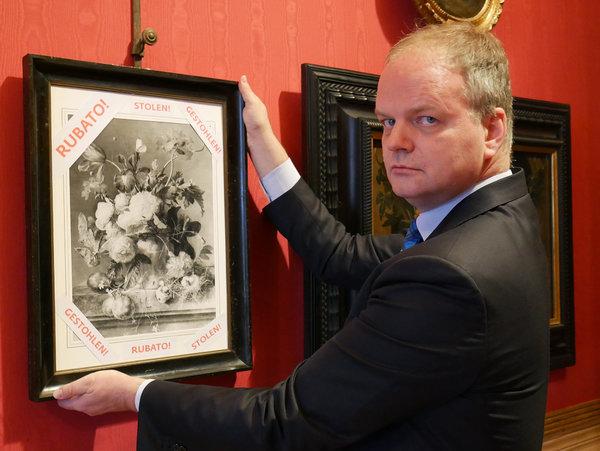 Eike Schmidt, director of the Uffizi Galleries in Florence, Italy, has hung a black-and-white copy of “Vase of Flowers,” by the Dutch painter Jan van Huysum with the word “stolen” in different languages.

ROME — Museums are not usually known for online trolling, so when one of the world’s great art institutions uses provocative hashtags like #Nazis and #Wehrmacht to make digital demands that Germany return a stolen painting, it is bound to draw attention.

The Uffizi Galleries in Florence, Italy, is calling on the German government to step into a dispute over a baroque painting that German soldiers took 75 years ago. “Vase of Flowers,” by the 18th-century Dutch master Jan van Huysum, is in private hands in Germany, and neither the museum nor the Italian authorities have been able to persuade or pressure the people who have it to give it up.

The Uffizi made its message public on Twitter on Tuesday, with a link to a lengthy “appeal to Germany for 2019” by its director, Eike Schmidt. It also posted on its website a video showing Mr. Schmidt ceremoniously affixing a black-and-white photo of Van Huysum’s still life in the Room of the Putti of the Pitti Palace, which is overseen by the Uffizi, where the painting hung before it was stolen during World War II.

Around the photo in bold red lettering is the word “stolen” in Italian, English and German, and a caption posted in front of it explains that the work was taken by German soldiers and is now held by a German family.

The German government has not responded. Under German law, legal claims for stolen property cannot be made after more than 30 years.

The painting has been the object of “on-and-off negotiations” for decades between Italian authorities and agents for the German family that has the work, Mr. Schmidt said. He said he did not know the identity of the family, but that it was “very likely” that they were related to the soldier who took the painting during the war.

Last year, a representative for the German family offered to return the work in exchange for a substantial sum of money (Italian media reported the sum as 500,000 euros, or about $567,000), prompting the museum — and Italian judicial authorities — to take action.

“We’re trying to get the German family to understand that we are not in a legal position to buy something that according to Italian and international law we already own,” said Mr. Schmidt, who is German and is the first foreigner to head the Uffizi.

Italian prosecutors and the Carabinieri, the national military police force, which has a division that investigates art theft, have opened investigations into the painting’s movements since it was taken from Italy. They have asked German judicial authorities to cooperate.

They are also evaluating whether the family’s request for money could be construed as extortion.

“What belongs to the Italian state has to be returned to the Italian state,” said General Fabrizio Parrulli, the commander of the Carabinieri’s art theft unit. He said his men were working with Florentine prosecutors on the case, but declined to give details, “because the investigation is ongoing.”

In such cases, German officials have said the 30-year statute of limitations means that when property is in private hands, there is simply no legal way to force its return, and no basis for government intervention.

For many years, Israel and Jewish groups have lobbied Germany to carve out an exception for items looted in the Nazi era. After the discovery in 2012 of more than 1,000 artworks in a Munich apartment, including some that were taken by the Nazis, the government considered such a change, but it never became law.

Mr. Schmidt said that generating publicity about “Vase of Flowers” should make it harder for the Germans who hold the painting to try to sell it.

“Thanks to the photo in the Room of the Putti, people will never forget that this work was stolen,” Mr. Schmidt said in a telephone interview. And thanks to the accompanying resonance on social media, “no one would ever be able to say that ‘I purchased this work in good faith,’ ” he said.

But some experts say that Italy should examine its own record on stolen art.

Italy was recently called out at an international conference on the restitution of art looted during World War II as one of five countries that have been slow to address the issue.

During the Nazi regime, Germans took thousands of precious items — often at the direction of high-ranking officials — from Jews, political opponents and conquered countries, and the fate of those items continues to make news. Germany has committed to returning items held in public museums, though it has faced criticism that it has acted too slowly, and the recovery of privately held works has been much more difficult.

At the same time, all of the former colonial powers face growing demands to return looted art and artifacts, including those they have had for hundreds of years; a recent report for the French government recommended returning all the objects in its museums that were taken from Africa.

Grand Duke Leopoldo II of Tuscany bought “Vase of Flowers” in 1824 to hang alongside other Dutch still-lifes, including works by Rachel Ruysch and Willem van Aelst, for the newly created Palatine Gallery in the Pitti Palace.

The palace was evacuated during World War II, and the painting, along with other works, was moved first to the Medici Villa at Poggio a Caiano, a small town outside Florence, and then to the Villa Bossi Pucci on the outskirts of the city. According to the Uffizi, before retreating from Florence in 1944 as the Allies advanced, German soldiers shipped artworks northward, and that is when “Vase of Flowers” disappeared from the public record.

Italian authorities first learned something of the painting’s fate in 1991, and since then, intermediaries for the German family have been intermittently involved in negotiations for its return.

The Uffizi has an extensive collection of Dutch still-life paintings, and the missing Van Huysum “left a gap” that begs to be filled, Mr. Schmidt said.

“This story is preventing the wounds inflicted by World War II and the horrors of Nazism from healing,” he said in a statement. “Germany has a moral duty to return this painting to our museum and I trust that the German Government will do so at the earliest opportunity, naturally along with every other work of art stolen by the Nazi Wehrmacht.”