German Family Urged to Return Painting Once Stolen by Nazis


Nazis stole an 18th century masterpiece, and now an Italy art gallery is urging Germany to return the painting to its rightful owners. 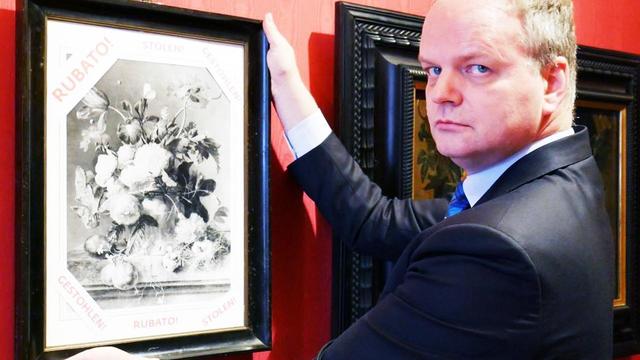 "Vase of Flowers," a still-life by Jan van Huysum, once hung in the Pitti palace museum in Florence.

In its place now is a black and white photocopy of the priceless painting with stickers on each corner that say "stolen" in Italian, German and English.

After several requests for the painting have been made, Eike Schmid, the director of the Uffizi Gallery that owns Pitti palace, is making their plea public, even involving Italian authorities to facilitate the return of the artwork.

"We should be able to get to a place where no one should want to have a piece of art that they know was stolen during the Nazi era," said art lawyer Nicholas M. O'Donnell. "It was a crime of such enormous proportions, but also of such intimate scale. These were things that hung in peoples' homes. These were the important objects in peoples' lives."

O'Donnell, who specializes in Holocaust restitution litigation, explained such cases of misplaced valuables following World War II are common since Nazis looted artwork both locally and from the countries they occupied.

He explained there was a big push to return the artworks to their rightful owners up until the Cold War, and similar efforts have restarted over the last 25 years.

"There are still literally hundreds of thousands of paintings and sculptures and decorative objects around the world that never found their way back to the people they came from," O'Donnell said. "Many of whom were killed in the war or were in the Holocaust, but a lot of which still have unanswered questions around them."

The topic becomes more complicated considering many of the new owners have paid for the artwork without knowing they were stolen, which is often protected under European private property law.

"Vase of Flowers" is now owned by a German family, who have demanded around $500,000 in exchange for the return of the painting.

However, Italian authorities state it cannot be bought since it is already the property of the Italian state, and are continuing to negotiate for its safe return.

"The question becomes what should happen, and whether there should be any payment from for example the German government, which of course is responsible for all this in the first place," O'Donnell speculated.