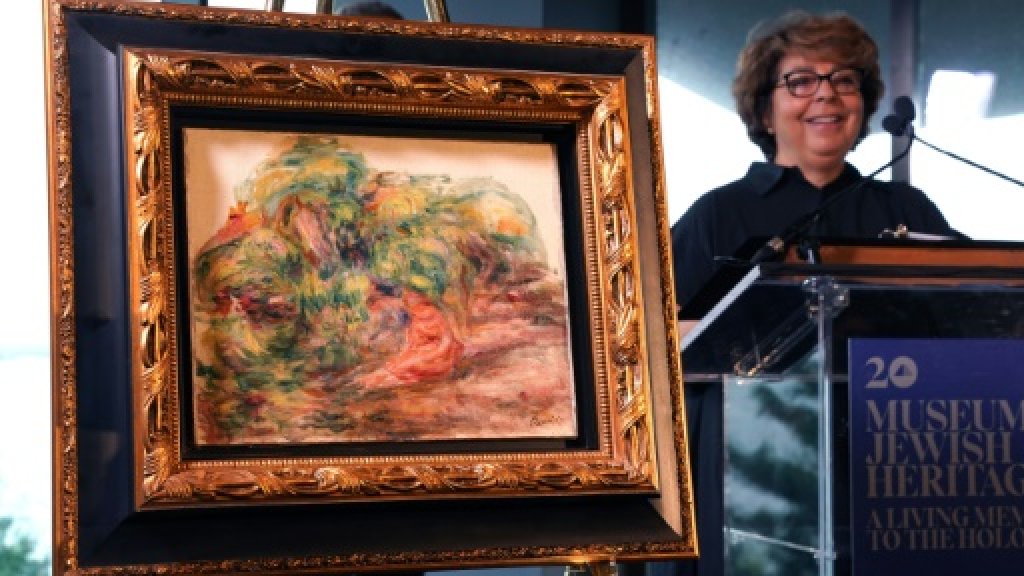 World War II ended more than 70 years ago, but works of art confiscated by the Nazis are still regularly unearthed by major auction houses, which contribute actively to their restitution.

But it wasn't until 2013, when the painting was being considered for a sale at Christie's in New York and the auction house flagged it as suspicious, that a descendant of the original owner was located and ultimately had the work returned.

The auction house traced the work's ownership back to Alfred Weinberger, who had stored his art collection in a bank vault when he fled Paris at the war's outset.

Federal prosecutors and the FBI returned the painting -- created in 1919, the same year Renoir died -- to Weinberger's granddaughter Sylvie Sulitzer in September at New York's Museum of Jewish Heritage.

A combination of factors over the past 20 years -- political, technological and generational -- have facilitated the return of stolen pieces.

After years of inertia, 44 countries agreed in 1998 to the Washington Principles to find and, if possible, return works stolen by the Nazis.

The declassification of numerous documents, the rise of the internet and digitalization have all given access to exhaustive and essential information for museums, art dealers and auction houses.

The Art Loss Register and the ERR database of art objects plundered by the Nazis, based on archives kept by the far-right political party, are the most exhaustive repositories of information -- but dozens of other resources exist.

Major auction houses like Christie's and Sotheby's have also adapted and formed dedicated teams since the late 1990s.

"They play a very major role," said Wesley Fisher, research director for the Claims Conference, a group created in 1951 whose tasks include working to return stolen possessions.

"There's a shifting generation. People who had these looted art works privately are passing away and their descendants then decide to sell the works."

Sotheby's head of restitution Lucian Simmons said the auction house researches every work that comes through its hands and was created before 1945, be it a painting, furniture, silverware or carpet.

The goal is to "minimize the risk that Sotheby's accidentally sells an art work which was looted in World War II and never litigated back," he added.

The laws vary between different countries. In Germany, the return of objects is no longer mandatory after 30 years under the civil code, while in France, works of arts cannot be taken from state collections.

"Auction houses generally do a better job than art dealers as a whole because auction houses have to advertise what they are selling and what they do is known publicly," Fisher explained.

If there is any doubt as to a piece's origins, it is now standard practice for the auction house to keep it, regardless of whether the official owner agrees.

"For Sotheby's, this is not necessarily a legal issue. It's more of an ethical and a moral issue," Simmons said.

"What I also have to explain is that even if the painting is theoretically clean under the law in one country, it doesn't mean that people will bid on it in an auction room if there's an outstanding World War II claim."

But he stressed that litigation is "very rare" because Sotheby's actively tries to resolve such situations amicably and through negotiations.

However, some auction houses that refuse to sell a suspect work of art or return it to the collector who tasked them with selling it sometimes face competing claims -- both from the official owner and the descendants of the original owner whose collection was confiscated.

In such cases, the auction houses turn to the authorities, as they did with the Renoir.

A source close to the matter said the collector ultimately gave in -- insisting on his ownership could have led to legal proceedings.

"One has to assume that the majority of art works looted during the Nazi-period are today in private hands and will only become known if private holders consign them for sale."

With the progressive disappearance of a generation of amateur post-war collectors, a large amount of paintings that could fall under this category are coming on the market, as seen in the recent fall auctions in New York.

"There are art dealers who prefer to keep the tradition of the art market, which is secrecy," Fisher said, also referring to smaller auction houses.