Ukraine’s duty to the heirs of Holocaust survivor Magda Mandel 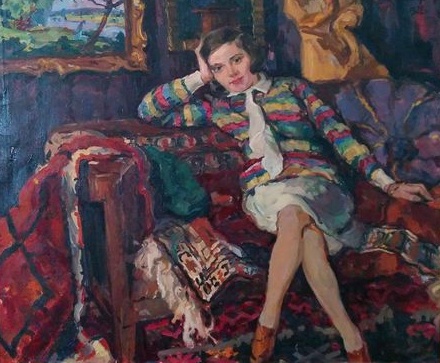 The Transcarpathian Art Museum in Uzhhorod houses what is believed to be the portrait of Magda Mandel (1912-1975). The artwork was stolen by the Nazis from Jews destined for death camps, where Magda's parents were killed. Her American cousin, Louis Mandel, is seeking return of the painting to the family.

As Ukraine seeks to surmount its Soviet past and join Europe, it’s time for Kyiv to address an important yet heretofore overlooked issue: Holocaust restitution, returning art stolen by the Nazis from Jews destined for the death camps. An ongoing case in the western city of Uzhhorod illustrates why Kyiv has a moral responsibility to address the issue of stolen Holocaust art – as well as how it might do so.

In 2012, Louis Mandel, a New York native, came to the Transcarpathian Art Museum in Uzhhorod to see in person a portrait of his late cousin Magda Mandel (1912-1975). Magda’s daughter, Martha Shapiro, made this journey a few years earlier, when for the first time she came face-to-face with a colorful 1928 painting depicting a teenage girl, entitled “A Portrait of a Young Artist.” The family now firmly believes that the work – by the Hungarian painter Adalbert Erdelyi – was commissioned by the Mandel family and depicts a smiling and carefree 16-year-old Magda. In 1944 Magda and her parents were deported to Auschwitz by the Nazi-allied Hungarian government of the time. While Magda’s parents perished, Magda herself survived the war and ended up in America. After the post-war Soviet Union annexed the region, the Transcarpathian Art Museum was established in 1948 and Erdelyi deposited Magda’s portrait with the museum. However, substantial evidence exists that after Mandel’s were deported, Erdelyi retrieved his painting from Hungarian thugs assigned to loot the homes of Jews destined for slaughter in the camps.

Over the course of the last several years, both Magda’s daughter and her cousin Louis have been pushing the Ukrainian government to return the stolen family heirloom. To date, Magda’s family – with the assistance of their lawyers – have reached out to the Uzhhorod museum, Ukraine’s Ministry of Culture, and even Prime Minister Volodymyr Groysman. Unfortunately, though, despite overwhelming evidence that the painting belongs to Magda’s family – including historical records and eye-witness affidavits – Ukraine continues to ignore their request to find a solution to the problem.

There’s no evidence that Ukraine’s lack of responsiveness to the Mandels is driven by anti-Semitism, but more simply the familiar post-Soviet bugaboos of inertia combined with officials’ unwillingness to take decisions which they fear may generate criticism later. However understandable this might be, though, it doesn’t justify Ukrainian officials’ unwillingness to address the issue in a “fair and just” fashion.  First and foremost, the moral imperative for Ukraine to return Holocaust art to its rightful heirs is self-explanatory. Magda’s martyred parents arranged for Magda’s Portrait and kept it in their home for their family’s enjoyment. It is only suitable that their granddaughter and great-grandchildren may be able to enjoy and cherish it, as one of the few concrete memorials of the mother they adored. As Magda’s cousin Louis wrote in a 2016 letter to Groysman, the painting “is of great sentimental value to my cousin’s daughters and of little use to a museum with a large collection of displayed and stored Erdelyi paintings.” Indeed, this isn’t exactly a case involving a Rembrandt or Monet – the painting itself isn’t worth more than $50,000, but for Magda’s family its value is priceless.

2018 marks 20 years after the signing of the Washington Principles underscoring the need for international cooperation in resolving questions about ownership of Nazi-era looted cultural valuables. Ukraine signed multiple international agreements related to the looting of art in wartime, including the 1998 “Washington Principles,” where signatories promised to take fair and reasonable steps to address stolen Holocaust art. In addition, in 1996 Ukraine actually played host to a major conference on how to handle the restitution of art and other valuables stolen by the Nazis.

More broadly the tug-of-war over Magda’s portrait offers Ukraine the opportunity to more formally address the issue of restitution. Many Western countries have created special commissions that review such Holocaust restitution claims and Kyiv should consider passing a law that creates a Ukrainian version of an impartial Holocaust Restitution Commission. This is not only the right thing to do, but would also provide Ukraine with a great opportunity to differentiate itself from Russia. Since 2004 the Russians have refused to entertain any Holocaust restitution claims, offering Ukraine a clear opportunity to do better, not only to morally distinguish itself but to align its values with those of France, the Netherlands and other Western nations.

Establishing a systematic process and a review commission would help Ukraine too. During World War II, many thousands of Ukrainian works of art were stolen by the Nazis, and have ended up all over the world in both museums and private collections. Given the degree to which Ukraine suffered under the Nazi occupation, the nation certainly has a legal and moral claim to retrieve as much of its stolen art as it can. A Ukrainian Holocaust and Nazi-era Art Restitution Commission could, therefore, be structured so that it addresses both Ukraine’s obligation to return art to the families of Holocaust victims as well as creating a formal structure to seek out and reclaim its own tangible cultural heritage.

The alternative to a compromise on the painting is stark. The attorney for Magda’s family indicated that while the family is committed to finding an equitable settlement that allows the heirs to reclaim ownership of their treasured family heirloom, they are also prepared to file suit against Kyiv in federal court in the U.S. This would – inevitably – result in a spate of negative publicity for Ukraine in the Western media. After suffering a spate of negative publicity – including letters from both 57 US Congressmen and the US Holocaust Museum slamming Ukraine for state-sponsored Holocaust distortion – a highly visible American lawsuit is the last thing Kyiv needs right now.

For the sake of the difficult history and tenets of fairness and justice, Ukrainian officials should rethink their approach to claims similar to those of the Mandel family and consider the benefits of returning the Portrait of Magda to her family.

Josh Cohen is a columnist and contributor to Reuters, Foreign Policy, the Washington Post, Atlantic Council and others.