In the planning stage since 2014, the exhibition — Max Stern: From Düsseldorf to Montreal — is to focus on the life and work of the Jewish art dealer, who in the 1930s was forced by the Nazi regime to liquidate his art gallery in Düsseldorf. 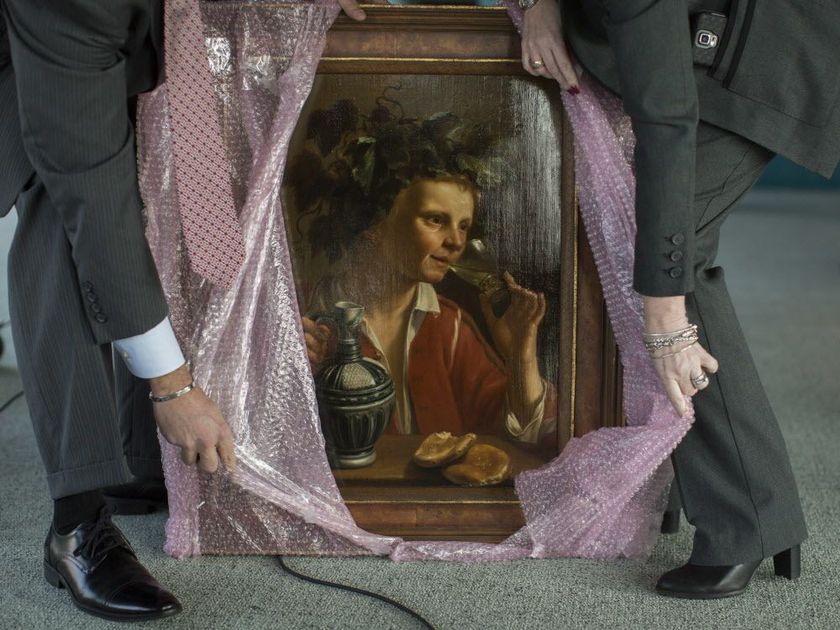 FBI agents unwrap "Young Man As Bacchus" by Jan Franse Verzijl before before the start of a ceremony to formally return the painting to representatives of the Max and Iris Stern Foundation, Wednesday, Feb. 8, 2017, at the Museum of Jewish Heritage in New York.

Two Canadian curators have withdrawn from a long-planned exhibition in Düsseldorf, Germany, about Montreal art dealer Max Stern, raising more questions about an event that has been mired in controversy since the fall.

In the planning stage since 2014, the exhibition — Max Stern: From Düsseldorf to Montreal — is to focus on the life and work of the Jewish art dealer, who in the 1930s was forced by the Nazi regime to liquidate his art gallery in Düsseldorf.

Under Nazi laws, Stern, a Jew, was barred from selling art. He owned more than 400 paintings. Some were seized, others sold by force at drastically reduced prices. Stern settled in Montreal in 1941, becoming a prominent art dealer and an advocate for Canadian culture.

The Düsseldorf exhibition has been in turmoil since November when the city’s mayor, Thomas Geisel, cancelled the exhibition three months before it was to open in the city’s municipal museum, the Düsseldorf Stadtmuseum. At the time, the catalogue had been prepared and museums around the world were making plans to lend works of art.

Geisel backed down in December after the cancellation drew condemnation from the Jewish community, art historians, the German government and the Max Stern Art Restitution Project, based at Concordia University.

Geisel said a “more complete” exhibition would be held, not in February 2018 as planned, but at a later unspecified date, with the help of an additional German curator and a “scholarly advisory board.”

The two experts — Montreal art historian Catherine MacKenzie and Philip Dombowsky, an archivist at the National Gallery of Canada in Ottawa — were told they were now to be members of a “scientific committee” rather than co-curators, Epstein said.

In an emailed statement, MacKenzie, professor emeritus in Concordia’s department of art history, told the Montreal Gazette she “was not prepared to re-engage when my work as part of a team in which I had felt privileged to participate was being increasingly devalued.”

Epstein, whose organization has recovered 16 paintings from Stern’s collection since 2002, said he is disappointed by Düsseldorf’s attitude.

“There aren’t more qualified authorities to speak on Max Stern anywhere in the world, so the fact that these two individuals were demoted is most unfortunate and very shortsighted and I completely understand why they would step back,” Epstein said.

He said it’s important to “reinsert the story of Max Stern and his family gallery back into the socio-historical context of Düsseldorf from which it was effaced during the Nazi period.”

Epstein said he’s “somewhat puzzled” by Düsseldorf’s actions and its “uncollegial” attitude because the exhibition was the brainchild of the city-owned museum and “for many years they were quite willing to move forward and to reinsert (Max Stern) into their history again.”

Düsseldorf city officials could not be reached for comment. German media have reported in recent days that the city plans to hold a symposium about Stern in November, with an exhibition planned for the fall of 2019.

Epstein said he is not sure what role, if any, his organization will play in the symposium and exhibit.

“What we’re finding is that the decisions seem to be taken quite independently of any stakeholder collaboration,” he said, adding he will review any requests for participation that might come from Düsseldorf.

Epstein’s Restoration Project was providing archival and historical information for the exhibit and planned to lend paintings. It also contributed 20,000 euros to help fund the project. It has now asked for the money to be returned. A Montreal Jewish community foundation had pledged a further $50,000 to the exhibition, but the money was never transferred, Epstein said.

Epstein said the Düsseldorf debacle “is not entirely indicative” of German attitudes toward art restitution.

“We’ve had considerable success and we’ve made inroads in numerous other jurisdictions including Düsseldorf in previous administrations,” he said.

“I don’t know what to assume other than this current mayor does not share the same outlook” toward art restitution as other German authorities, including the federal government.

Düsseldorf was led by another mayor when the exhibition was conceived in 2014.

Ronald Lauder, president of the World Jewish Congress, recently pointed to the Düsseldorf controversy when he chastised German officials for not doing enough to help recover art that was stolen or forcibly sold under the Nazis.

“Germany has promised much, but has, so far, done the bare minimum to solve this problem,” Lauder told a gathering in Berlin in February.

Under the initial plan, after opening in Dusseldorf, the exhibition was to move to Haifa, Israel, before culminating at Montreal’s McCord Museum in 2019.