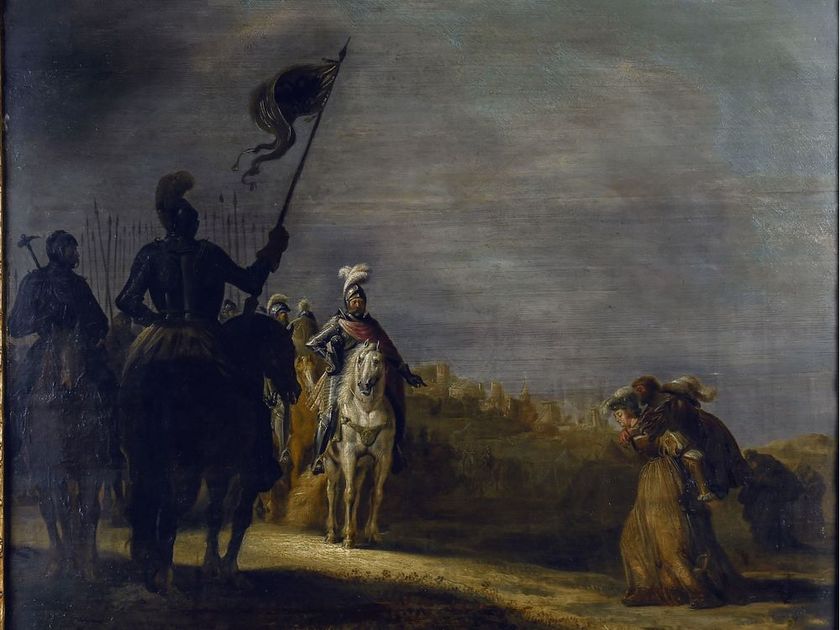 This 17th-century painting, Women of Weinsberg, was found to be one of the hundreds of artworks Jewish German art dealer Max Stern was forced to liquidate under the Nazi regime


A small German city known for a Middle Ages siege is the latest focal point in a global effort to recover art that once belonged to Max Stern, a Jewish art dealer who was forced to sell his paintings by the Nazis in the 1930s before he settled in Montreal.

For 30 years, Weinsberg, Germany, has proudly displayed Women of Weinsberg, a 17th-century work by Dutch painter Gerrit Claesz Bleker, depicting the Siege of Weinsberg. It shows a woman carrying a man on her back as soldiers on horseback look on.

City officials had no idea the work was Nazi-looted art until 2014 when evidence was uncovered by the Montreal-based Max Stern Art Restitution Project, which has been hunting for more than 400 paintings from Stern’s collection since 2002.

Under Nazi laws, Stern, a Jew, was barred from selling art and was forced to liquidate his Düsseldorf gallery. He owned more than 400 paintings. Some were seized, others sold by force at drastically reduced prices. Stern moved to Montreal in 1941, becoming a prominent art dealer and an advocate for Canadian culture.

On Monday, at a ceremony at the Neumeister auction house in Munich, the painting will be turned over to representatives of the Max and Iris Stern Foundation and its three university beneficiaries — Concordia, McGill and Hebrew University in Jerusalem.

The handover will be symbolic because the foundation has sold the painting back to the city for an undisclosed price. Weinsberg, population 12,000, is located 230 kilometres southwest of Munich.

“What they demonstrated to us is that the painting was central to their civic history and if at all possible they wanted to find a way to keep it,” said Clarence Epstein, head of the Max Stern Art Restitution Project. “We felt it was the right thing to do given the meaning of this painting in their civic history.”

In the siege of 1140 portrayed in the painting — the 17th Stern painting to be recovered — Castle Weinsberg was under attack by King Conrad III. The men in the castle were to be killed, the women spared. The women negotiated a surrender under which they could leave with whatever they could take on their shoulders. They carried their husbands. The king is said to have laughed and let the men live.

In some previous cases, museums that had returned Stern paintings have been allowed to keep them on loan from the Stern Foundation. But Epstein said this is the first time a museum has bought back a painting that it had agreed to return.

In 2014, researchers with the Max Stern Art Restitution Project found records and references related to Stern’s ownership of the painting at the Netherlands Institute of Art History. A claim was submitted that year, with the agreement reached last fall to return and then purchase the painting.

Monday’s ceremony was to be held in Düsseldorf, where an exhibition about Stern’s life and work had been scheduled to take place, beginning in February.

But the ceremony was moved to Munich because the Düsseldorf exhibit has been mired in controversy since last fall when that city’s mayor, Thomas Geisel, canceled the event, then backtracked and announced it would be delayed and reorganized. In recent days, two Canadian curators of the exhibit resigned.

“We are hopeful that the Weinsberg return and exemplary efforts of various state and national partners will compel other German municipalities, museums and collectors to openly address restitution matters,” Epstein said.

“The restitution of this painting is a testament to the fact that, through the dedicated efforts of individuals and organizations, a small measure of justice can be brought to this dark period of history,” Stéphane Dion, Canada’s ambassador to Germany, said in a statement.