On the 100th anniversary of Gustav Klimt's death, two restitution cases illustrate how returning paintings to the heirs of the original Jewish owners remains a tangled process.

The "Beethoven Frieze" by artist Gustav Klimt is one Austria's most valuable cultural treasures. Every year, thousands of visitors from around the globe enter Vienna's Secession building to contemplate the work. In 2004, it was chosen as the main motif for Austria's 100-euro gold and silver commemorative coins.

In 2013, the heirs of the Lederer family, who had owned the frieze before it was looted by the Nazis, demanded its restitution, adding an unexpected chapter to the work's contentious past. "It was inconceivable for people that there could be a claim for the frieze," says Austrian provenance researcher Sophie Lillie.

Gustav Klimt painted the 34-meter-long (112-foot-long) fresco for the Viennese Secession's celebratory exhibition of Beethoven's life and work in 1902.

The visual representation of the composer's "Ninth Symphony" as interpreted by Richard Wagner is an image of Vienna's modernism. An era forwarded by Klimt, among other artists. 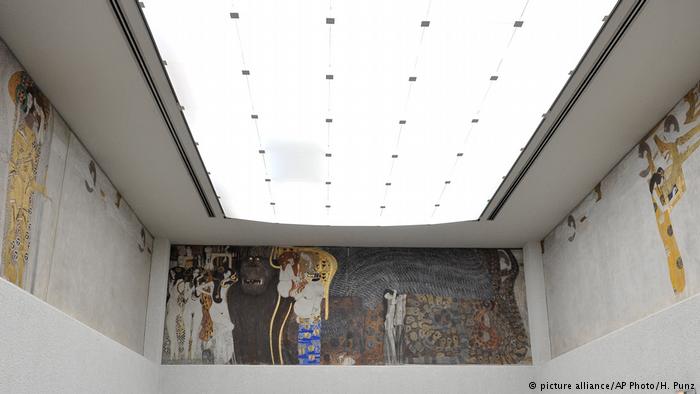 Gustav Klimt's Beethoven Frieze at the Secession gallery in Vienna

Through color, sensuous lines, and figures whose bodies are filled with sentiment, Austria's most renowned artist conveys humanity's struggles and yearning for happiness and love. The last scene, depicting a choir of angels and embracing lovers, is a representation of the arts leading to a paradise of pure love and joy.

The Lederers, patrons of Klimt's art

As patrons of Klimt's art, August and Serena Lederer bought the painting in 1915.

The artist would often dine with them and join them on vacation. Serena and her mother Charlotte are among the many Jewish socialites who posed for him. 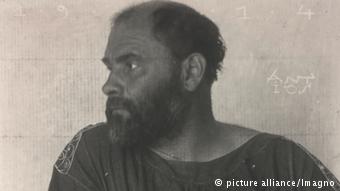 It was rumored that Klimt was the father of Serena Lederer's daughter, Elisabeth Bachofen-Echt

Theirs was one of the first art collections seized by the Nazis in 1938. When the war ended, Erich Lederer, August and Serena's son, took it upon himself to get back his family's collection.

The export ban blocking the frieze

The frieze was returned to the Lederer family — at least in theory. But the work could not leave Austria since it was subject to an export ban, put in place to prevent émigré families from taking away what was beginning to be considered Austria's cultural heritage.

"From the beginning they told Erich that the frieze [leaving Austria] wasn't up for discussion," says one of the heirs, who prefers to remain anonymous. Erich Lederer, who had moved to Geneva, was therefore forced to sell the work at a cut-rate price, claim the heirs.

By 1972, Lederer had lost all hope of getting the artwork sent to Switzerland, and accepted the government's offer of 15 million shillings, around $750,000 dollars.

"What people don't know is that a lot of it" — the aggressive government acquisition of artworks — "took place after the war," says the heir. 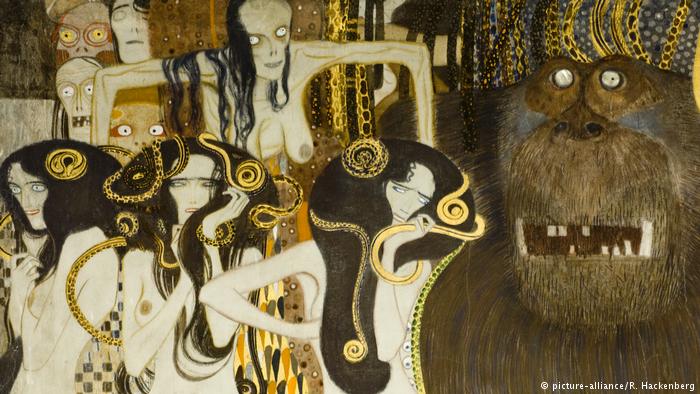 A detail of the Beethoven Frieze

In 1998, Austria created a restitution committee, and passed a law enabling heirs to reclaim their artworks. In 2009, an extension was added for cases of post-war export bans and disadvantaged sales.

The frieze fulfilled all the conditions for restitution, confirms Austrian provenance researcher Lillie.

Yet in 2015 the restitution committee advised the government not to return it. "It is not the case that the export procedure was used as a tool to force Lederer into an agreement," Clemens Jabloner, head of the Austrian Art Restitution Advisory Board, said at the time.

'Apple Tree II': The story of an error

Since 1998, Austria has returned dozens of paintings that hung on the walls of its cultural institutions, among them Klimt's "Apple Tree II" (1916).

The artwork depicts an apple tree amidst a cloudy landscape. The familiar motif is rendered unique as the artist lowers the horizon, and gives the image a new perspective.

In 2000, the restitution commission advised the return of the Belvedere Museum's painting to the heirs of Nora Stiasny.

What seemed like an act of historic redemption turned out to be a mistake that cannot be repaired. 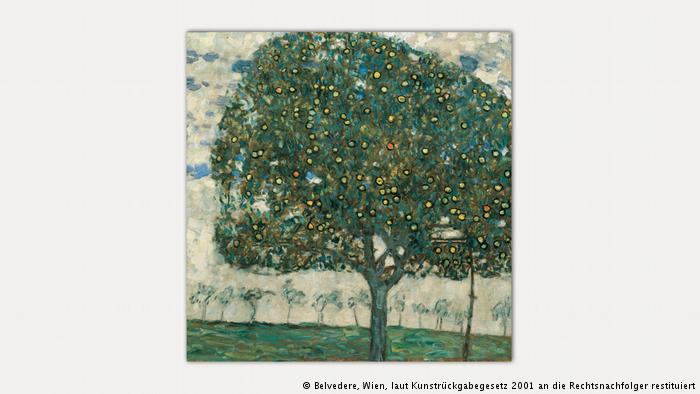 The story dates back to 1999, when journalist Hubertus Czernin — who had also helped Maria Altmann pursue her claim over Klimt's "Adele Bloch Bauer I"(1907) — wrote an article in the newspaper der Standard correcting Fritz Novotny and Johannes Dobai's Klimt catalogue from 1967.

According to Czernin, "Apple Tree II" had belonged to the Zuckerkandls and not the Lederers. Following Czernin's lead, the Austrian Commission for Provenance Research opened an investigation.

The commission determined that Nora Stiasny had inherited the artwork from her uncle, the industrialist Viktor Zuckerkandl. Following the annexation of Austria into Nazi Germany in 1938, she sold the painting for 395 reichsmarks to a man Philipp Häusler. The work had been evaluated at 5,000 reichsmarks.

Later the painting was believed to have been sold to Gustav Ucicky, a Nazi-propaganda filmmaker and Klimt collector. After his death in 1961, the work was gifted to the Belvedere Museum.

Stiasny and her mother Amalie Zuckerkandl were killed in the Izbica Ghetto in 1942. 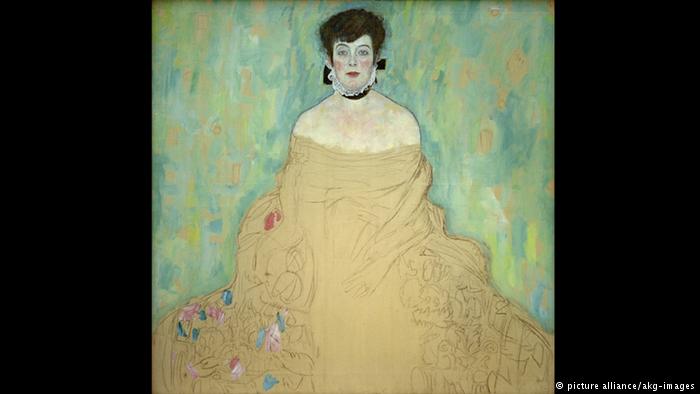 Before its restitution to the Stiasny heirs, Monika Mayer, a provenance researcher from the Belvedere Museum had raised doubts. Elisabeth Bachofen-Echt, daughter of August and Serena Lederer, had also inherited a Klimt apple tree landscape. However, Monika Mayer's questions went unheard.

In 2015, heirs of the Lederers also claimed that they were the owners rightful owners of the work.

This almost abstract apple tree scene has a pointillist feel to it. Unlike Paul Signac or Georges Seurat, Klimt did not break the picture down into bits of bright color. "Roses Under the Trees" currently belongs to the Musée d'Orsay in Paris. 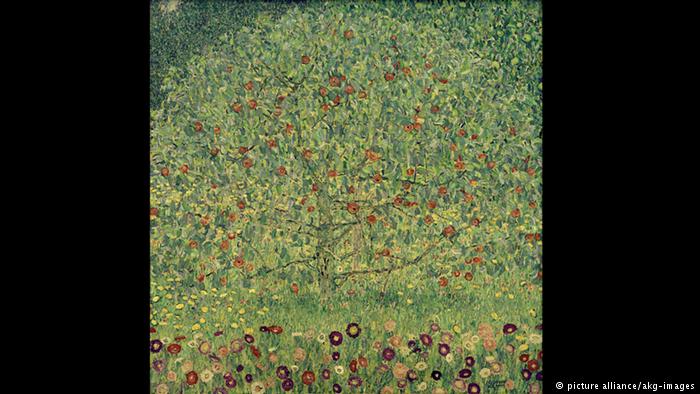 Klimt produced different variations on the theme. This work is called "Apple Tree I"

The purchase receipt in Paris gave insight into its history. Apparently Häusler never sold Stiasny's painting. He smuggled it to Frankfurt, and after his death in 1966 it hung behind a sofa in his secretary’s house. In 1980 Nathan Peter Gallery in Zurich sold it to the museum.

Vienna is revising the legal framework to amend the error. But since "Apple Tree II" was a "gift" from the nation, there seem to be no legal grounds to ask for it back. Besides, the family sold it years ago to an unknown private collector.

The full story of this artwork is still unknown. Investigators are searching for clues on how Ucicky acquired it. Elisabeth Bachofen-Echt sold the paintings she had inherited, and could have sold it to him. But he could have also gotten it after her death in 1944 from her former husband, Wolfgang Bachofen-Echt. The date of the purchase is important because if it was after 1945, no restitution is needed.