RALEIGH, N.C. (WNCN) – A massive masterpiece now on display at the North Carolina Museum of Art was once in the collection of Adolf Hitler.

Nazis took the six foot by nine foot oil painting, known as “Birds of Prey Attacking a Henhouse” or The Invaded Poultry House, from a Jewish family in Vienna, Austria in 1938, according to Raleigh realtor Alexandra Cardarelli.

Her hobby is researching art stolen by Nazis.

Cardarelli’s inspiration is a result of being the great-granddaughter of the rightful owner of the painting. 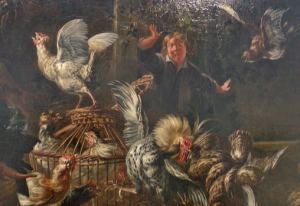 She spent years digging through archives which led to her locating the painting in the basement of an art museum in Linz, Austria. Cardarelli was able to reacquire the artwork and show it to her grandmother as part of a 93rd birthday celebration.

“It took her years, but she was able to accomplish what she had set out to do,” museum curator Dennis Weller said.

“Apparently this painting was acquired for Hitler by his art dealer, and planned to be hung in his museum in Linz, and that really, I think, ups the ante in terms of what was considered great art by Hitler and the Nazi regime and this was certainly part of it.”

Weller, who heads the museum’s collection of Northern European Art, said Nazis wanted the best art they could get their hands on. He said having such a large piece of artwork for Hitler’s planned Führermuseum in his hometown of Linz was likely particularly appealing.

The artists and the date of completion are uncertain. Art historians believe it is likely a collaboration between 17th century Flemish masters Adriaen van Utrecht and Jacob Jordaens.

Weller said it was common for artists to work together on large scale paintings with sometimes as many as 10 different painters.

The giant image shows birds of prey, possibly falcons, attacking chickens and roosters in a hen house as a young man runs in from the background. Weller said van Utrecht probably painted the poultry animals while Jordaens designed the person.

“That is what you say, but then there is the sense that this actually is a painting that makes reference to the 80 Years War (The Dutch War of Independence). That, if you will, conflict between the northern Netherlands and the southern Netherlands and other parts of Europe where you had Catholics and the Protestants going at each other,” Weller said.

“Protestant birds are apparently the chickens, and then you have the attacking birds of prey which were seen as the Catholics at the time.”

There are also a pair of ducks in the lower left corner.

Weller is unsure if the contents of the Baroque artwork had any particular appeal to the Nazis. He said there may have been a perception of invasion imagery and sense of dynamism, but the main draw was likely the size and quality of artwork available through theft basically in Hitler’s backyard.

Alexandra Cardarelli is working with the museum staff to plan an event or two to highlight painting’s history and her work to regain it for her family.

In addition to appreciation for the artwork, Cardarelli said she hopes the exhibition will encourage others, particularly Jewish families who lost things to Nazis, to continue searching for their property and history.