Poland is recovering a work of art lost during World War II every five days on average, a senior official said on Friday. 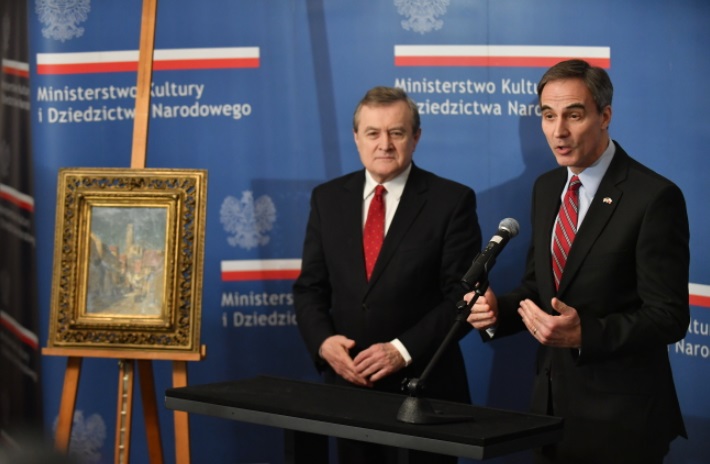 Polish Culture Minister Piotr Gliński and US Ambassador to Poland Paul W. Jones with the “Street with Castle Ruins" painting.


Deputy Culture Minister Jarosław Sellin added, however, that there were still some 63,000 works that his ministry wants to recover. A search for such pieces was being stepped up, he said.

"Our [ministry's] War Losses Section, part of the Department of Cultural Heritage Abroad, daily keeps track of various announcements of auctions in various auction houses around the world” as well as monitoring other information online, said Sellin.

Nazi Germany and the Soviet Union plundered a huge amount of art and valuable objects when they occupied Poland during World War II.

A painting entitled “Street with Castle Ruins" by well-known 19th-century Polish artist Robert Śliwiński recently returned to Poland thanks to the help of the FBI. The painting went missing during World War II.

Meanwhile, a painting by 19th-century Polish artist Henryk Siemiradzki entitled “The Sword Dance” was withdrawn from an auction at Sotheby’s in London scheduled for Tuesday.

The auction house took the decision at the last minute, following a request from the Polish Ministry of Culture and National Heritage.