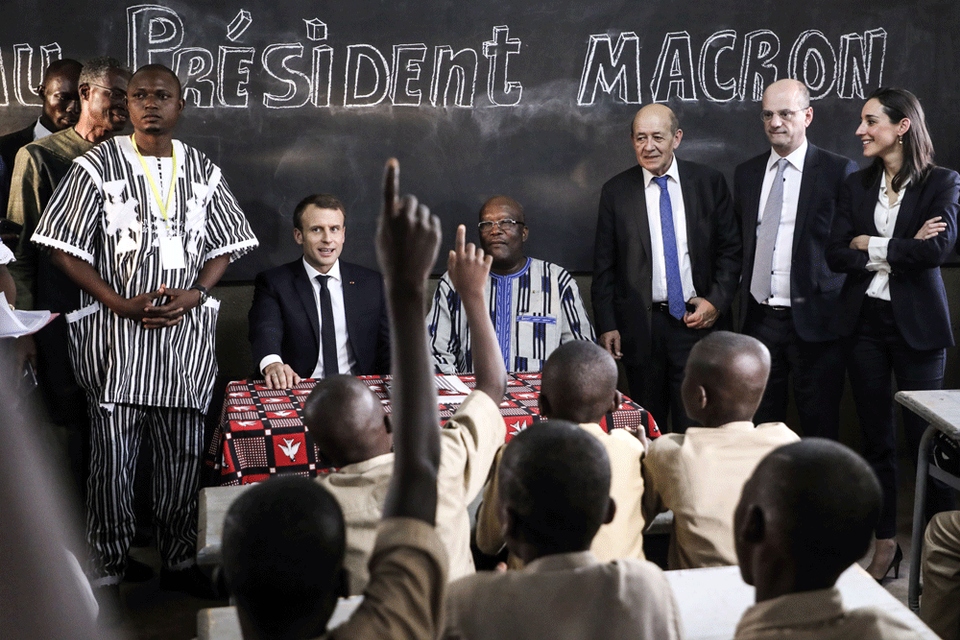 French President Emmanuel Macron and Burkina Faso's President Roch Marc Christian Kabore sit in a classroom as they visit the Lagm Taaba school in Ouagadougou, as part of his first African tour since taking office

French President Emmanuel Macron’s pledge to return African artefacts housed in French institutions to their country of origin has been called historic by restitution specialists, who also questioned how the new cultural policy will be implemented.

In a speech given yesterday (28 November) at the University of Ougadougou in Burkina Faso, Macron said: “I cannot accept that a large part of cultural heritage from several African countries is in France. There are historical explanations for that, but there are no valid justifications that are durable and unconditional. African heritage can’t just be in European private collections and museums. African heritage must be highlighted in Paris, but also in Dakar, in Lagos, in Cotonou.”

In the next five years, Macron stressed that he wants the conditions to be met for the "temporary or permanent" restitution of African heritage to Africa. “This will be one of my priorities,” he said.

Yves-Bernard Debie, a Brussels-based lawyer specialising in cultural property and trade, tells The Art Newspaper that this speech is historic because it breaks with the French legal tradition established in 1566 by the edict of Moulins. “Since that time, the royal domain has become the public domain and is inalienable,” he says.

“I’m concerned because it is a very bad signal to send to all the countries that think they can ask for the restitution of goods that, in their view, have been unlawfully obtained. There is no longer any reason that prohibits these countries from claiming ‘their heritage’ from France. Is this realistic? Yes and no. No because of the principles of inalienability that are enshrined in the law. Yes, because we can always change the laws,” Debie adds, asking: “What does ‘temporary restitution’ mean? A restitution is to return to its rightful owner something that was obtained unlawfully, and, one cannot, on the other hand, return something temporarily.”

On the other hand, Professor Nicholas Thomas, the director of the Museum of Archaeology and Anthropology in Cambridge, argues that this is a move in the right direction. “President Macron's commitment to prioritise the issue will be welcomed by many museum curators,” he says.

Museums in France housing African artefacts may now be forced to draw up new guidelines for repatriation. More than 70,000 items from sub-Saharan Africa housed at the Musée du Quai Branly-Jacques Chirac in Paris come from the former Africa and Madagascar collections of Musée de l’Homme and Musée National des Arts d’Afrique et d’Océanie in Paris. Museum officials declined to comment on Macron’s announcement.

The Musée du Quai Branly-Jacques Chirac in Paris is embroiled in its own restitution battle with Benin, which called last year for the return of Guezo, Glele and Behanzin treasures in the museum’s collection. The disputed works were seized in 1892 from a kingdom that stretched across what is now Benin and Nigeria when the French army ransacked the royal palaces of Abomey in Benin.

In August 2016, the Benin government formally asked the French foreign ministry to repatriate the works. But the then minister, Jean-Marc Ayrault, said last December that restitution is impossible because the collection, like those of all French public museums, is “inalienable”.