A Remnant From Caligula’s Ship, Once a Coffee Table, Heads Home 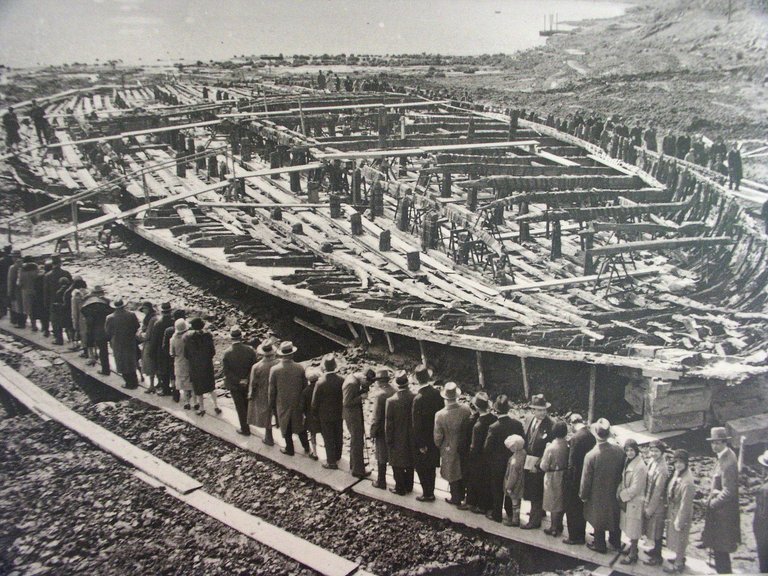 A photograph from 1930 of one of the two Roman ships recovered from Lake Nemi.

The ceremonial ships that the Roman Emperor Caligula built to host decadent festivities on Lake Nemi were ornate floating palaces, with pink marble columns and brightly colored mosaic floors. Adorned with gold and gems and bronze friezes of animals, they were the sites of mega-parties that sometimes lasted days, according to historical accounts.

But for much of the past five decades, a four-by-four piece of mosaic flooring from one of the ships has been sitting in a somewhat more prosaic setting, the Park Avenue apartment of an antiques dealer, where it was used as a coffee table, often to hold a vase of flowers and, occasionally, someone’s drinking glass.

Now investigators for the Manhattan district attorney’s office are trying to sort out the journey of the 2,000-year-old piece of Roman history that was once dredged from the lake outside Rome and somehow ended up in a private home in New York City. Last month, prosecutors seized the mosaic, saying they had evidence it had been taken from an Italian museum before World War II. On Thursday evening, the piece was returned to the Italian government at a ceremony, along with two other recently recovered antiquities.

“These items may be beautiful, storied, and immensely valuable to collectors,” the district attorney, Cyrus R. Vance Jr., said in a statement, “but willfully disregarding the provenance of an item is effectively offering tacit approval of a harmful practice that is, fundamentally, criminal.”

The antiques dealer, Helen Fioratti, said she and her husband, Nereo Fioratti, a journalist, had bought the mosaic in good faith in the late 1960s from a member of an aristocratic family. The sale was brokered, she said, by an Italian police official famed for his success in recovering artwork looted by the Nazis.

“It was an innocent purchase,” Ms. Fioratti said in an interview. “It was our favorite thing and we had it for 45 years.” 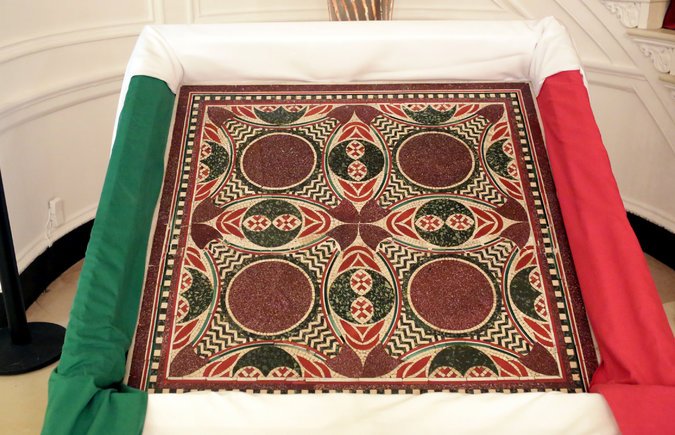 The piece of Caligula’s ship, on display at the Consulate General of Italy in Manhattan.

Ms. Fioratti, who owns L’Antiquaire and the Connoisseur, a noted gallery for antiques from Europe on East 73rd Street, said she did not intend to fight the seizure because of the expense and time it would take. Still, she said she believes she has a legitimate claim to ownership. “They ought to give me the legion of honor for not fighting it,” she said.

No charges had been filed against her on Thursday, though the search warrant said investigators were looking for evidence to support a charge of possession of stolen property.

The square piece of marble flooring — which features a complex geometric pattern made of pieces of green and red porphyry, serpentine and molded glass — dates back to Caligula’s reign, 37-41 A.D., and came from one of three enormous ships that he had built at Lake Nemi, a circular volcanic lake where there was once a temple to Diana, the goddess of the hunt.

Scholars have debated for years whether the barges were purely pleasure craft or might have been floating temples to the goddess. What is certain is they amounted to a haven for the emperor.

“They functioned as artificial floating islands, where the emperor could retreat, being completely separated from the world,” Francesco De Angelis, a professor of art history and archaeology, at Columbia University, said in an email.

After Caligula was assassinated, the ships were sunk, and remained underwater for centuries, despite efforts by divers over the years to retrieve their treasures. Mussolini began draining the lake in 1929 and by 1932, two of the ships had been located and hauled ashore. In 1936, the Fascist government built a museum to display the artifacts, including the complete mosaic and a few other smaller fragments, according to experts. At the end of the war, however, partisans opposed to the government set fire to the museum, which had been used as a bomb shelter, damaging many of the artifacts. 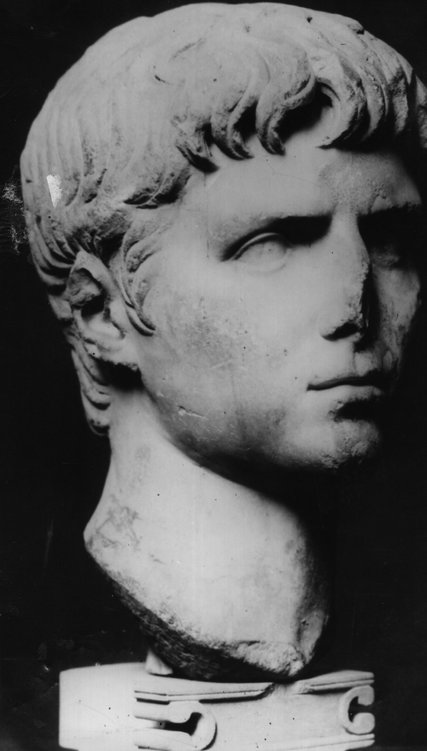 A bust of Caligula, the Roman emperor.

Manhattan prosecutors believe the mosaic was taken from the museum before the fire, because it shows no sign of damage like the other fragments.

The mystery of the mosaic’s whereabouts did not begin to clear until 2013, when an Italian expert on ancient marbles, Dario Del Bufalo, published a monograph about the Roman’s emperor’s use of red porphyry, a blood-colored stone associated with power. To promote his book, Mr. Del Bufalo gave a talk in New York attended by many art historians and dealers. He said he showed the assembled experts a photo of the mosaic that had been taken at a gallery in Rome in the 1960s, a rare sighting of the stolen work.

Ms. Fioratti and her husband had never tried to hide the mosaic, and there were people in the audience who had seen it in their home, Mr. Del Bufalo said in an interview. Reports of its whereabouts in New York eventually reached the ears of the authorities, he said.

It is unclear why it took four years for the investigation to be completed. Earlier this year, Matthew Bogdanos, an assistant district attorney who has spearheaded Mr. Vance’s efforts to recover stolen antiquities, contacted Mr. Del Bufalo to gather evidence. A judge issued a search warrant to seize the piece on Sept. 18.

Mr. Del Bufalo said it matters little who sold the mosaic to Mr. Fioratti, who was a longtime correspondent for Il Tempo newspaper, because he or she could not have passed along good title to a stolen item.

For her part, Ms. Fioratti said she had no papers proving ownership and she could not remember what her husband had paid for the mosaic. She said he had learned about the piece from a friend, who told him the aristocratic family was looking for a buyer.

When the piece arrived at their Park Avenue home, they paid to have a marble frame attached to the square of flooring and then put it on a pedestal in their living room. Over the years, Ms. Fioratti said, curators who visited had told her they were interested in procuring it for their collections. “I could have made a fortune,” she said.