A Green Light for Art Criminals? 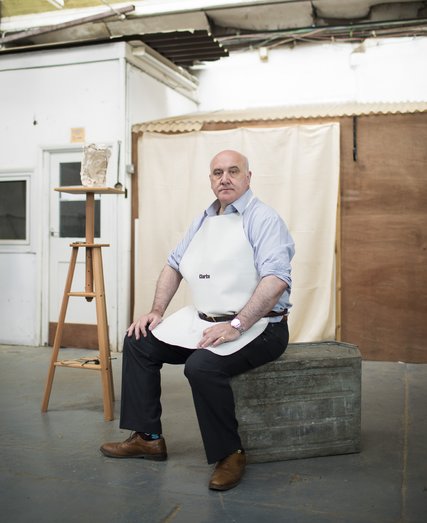 Shaun Greenhalgh at his studio in the north of England in May. “There’s less good faking now,” said Mr. Greenhalgh, who in 2007 was sentenced to four years and eight months in prison after making and selling forgeries of historic artworks.

LONDON — The horrific Grenfell Tower fire, which claimed the lives of about 80 residents of an apartment block here in June, has had a number of unforeseen consequences.

Among them is the Metropolitan Police’s decision to temporarily transfer the three officers in its art and antiques unit to the team investigating the blaze. The redeployment of Detective Constables Sophie Hayes, Ray Swan and Philip Clare, first reported last month in The Art Newspaper, leaves London, the world’s second-largest market for art and antiques, after New York, unsupervised by any specialist police officers — for the moment, at least. In 2016, the British market, dominated by London’s auction houses and dealers, was estimated to be worth $12 billion in sales, according to a report compiled by Art Basel and UBS.

“It’s the wheel turning full circle,” said Richard Ellis, a former officer at the Met, as the police force is known, who founded the unit in 1989. His art and antiques squad of then-four permanent detectives revived a section that had been disbanded in 1984.

“It seems hugely irresponsible to close the unit at a time when terrorist activity is being funded at least to some extent by the illegal trade in antiquities,” he added. “We’re at a completely opposite pole from America.”

ICE contends that the Islamic State militant group has established “systematic procedures” in Iraq and Syria to “extort illegal excavation operations to generate revenue.” This illegal traffic has therefore become a hot-button issue for the Department of Homeland Security in Washington and for international bodies such as Unesco. But reputable antiquities dealers, while wary of handling looted works, remain sanguine.

“In 2011, we asked our members to report if they were offered anything suspicious,” said Vincent Geerling, a trader in Amsterdam who is chairman of the International Association of Dealers in Ancient Art. Seven of its 32 members are based in London. “To our astonishment, it just hasn’t happened,” said Mr. Geerling, who cited just two examples of suspicious items being offered to the association’s members.

But according to Édouard Planche of Unesco’s secretariat, looters are simply playing a waiting game.

“You don’t see the most valuable illegal pieces on the open market,” Mr. Planche said. “But we’ve seen the extent of the illegal excavations. Where does this stuff go? It either goes into private collections or is put in storage. Sooner or later, it will appear on the market, maybe in 20 years’ time.”

The United Nations Security Council announced in February 2015 a ban on all trade in looted antiquities from Iraq and Syria. The moratorium appears to have been effective, at least in the experience of London’s police force.

“The Met’s Art and Antiques Unit have had no referrals to support the claim that the London art market is experiencing an upsurge in artifacts emanating from conflict zones in Syria and Iraq,” said Asim Bashir, a Met communications officer, in an email. He said the Met was currently dealing with “a very small number” of investigations relating to illicitly excavated antiquities from those regions.

“Information gathered shows that the items left the source countries a number of years ago,” he added.

Martin Finkelnberg, head of the Art and Antiques Crime Unit of the Dutch police, said he had seen “no evidence” of antiquities being sold to fund terrorism. And he sympathized with the Met’s decision to reassign its art and antiques specialists. “When something major happens, it has to be all hands on deck,” he said. “Police forces only have so many officers.”

Originally founded in 1969, the Metropolitan Police’s art and antiques unit has accumulated specialist expertise in a range of art-related crimes including theft, forgery and fraud. Its London Stolen Arts Database contains details and images of 54,000 items. .

The Met declined to provide overall statistics about the unit’s recent investigations or prosecutions, and just one art-related prosecution features in the Met’s searchable news releases. In June, Nadeem Malick was sentenced to 18 months in prison for dealing in stolen watches.

Mr. Ellis, the former leader of the Met’s art and antiques squad, said that in the 1980s and ’90s, police resources were further stretched by fakes. Investigating master forgers such as John Myatt and Shaun Greenhalgh required the unit to take on five extra officers, according to Mr. Ellis.

“There’s less good faking now,” said Mr. Greenhalgh, who in 2007 was sentenced to four years and eight months in prison after making and selling forgeries of historic artworks. These included an “ancient Egyptian” alabaster statue of a princess that was bought in 2003 by the Bolton Museum in northern England in 2003 for 440,000 pounds, or about $700,000 at the time.

“It’s far more difficult to do with the science being what it is,” said Mr. Greenhalgh, 57. “Painting fake old masters is just not possible now. But any confident art student can do 20th century.”

Mr. Greenhalgh’s privately printed autobiography, “A Forger’s Tale,” was reissued by a mainstream publisher in June and has so far sold 5,000 copies in hardback. In the book, he controversially claims to have forged “La Bella Principessa,” a drawing, purportedly by Leonardo da Vinci, that has been valued at as much as $150 million.

The former faker described the Met’s specialist art and antiques detectives as an “occupational hazard” when he was active. He said he thinks that genuine artifacts, rather than forgeries, now present a bigger challenge to the police.

“Plundering antiquities in the Middle East and South America and legitimizing them with false provenances, that’s the major problem in the art world today,” Mr. Greenhalgh said.

Janet Ulph, a professor of commercial law at the University of Leicester in England, takes a similar view. “Cultural property is a specialist area,” she said. “You do need police experts who understand all the different laws relating to the illicit trade.”

She said she is concerned that Britain might be unable to fulfill its obligations to international agreements, such as a recent United Nations resolution which urges governments to take effective measures against trafficking in cultural property. “The absence of the unit cuts away at the U.K.’s response,” Professor Ulph said.

It might be too much to say that the scaling back of the Met’s art and antiques unit is a green light to criminals. But right now, there is no officer on the art beat keeping an eye on the traffic.