The Stiftung Preussischer Kulturbesitz (Prussian Cultural Heritage Foundation) returns nine works from the Kupferstichkabinett (Museum of Prints and Drawings) of the Staatliche Museen zu Berlin (National Museums in Berlin) to the heirs of the Jewish businessman and collector Eugen Moritz Buchthal. One of them, an etching with the title 'Houses on Fehmarn with a Large Tree' by Ernst Ludwig Kirchner, has been bought back by the Foundation for the Kupferstichkabinett.

Hermann Parzinger, the SPK's President, remarks: "As with almost every restitution claim in recent years, we have managed to find a fair and just solution in this case. I would like to thank the heirs of Eugen Buchthal very much for allowing us to acquire the Kirchner print for the Kupferstichkabinett."

Lothar Fremy of the law firm Rosbach & Fremy, who represents Buchthal's heirs, says: "The Stiftung Preussischer Kulturbesitz has worked very hard to find together with the heirs of Eugen Moritz Buchthal, a just solution regarding the works of which the collector was deprived as a consequence of persecution, and has thus set a further example of how a fair solution for such matters can be achieved within the framework of mutual and respectful cooperation. The Buchthal heirs would like to thank the Foundation very much for its responsible handling of an issue that in many cases remains unresolved, even today."

Eugen Moritz Buchthal, born in Berlin on March 11, 1878, was co-owner of a clothes manufacturing company: Seeler-Herrmann-Damenmäntel und Kleiderfabrik & Co. He married Therese Wolff, with whom he had three children. In 1922/23, the couple commissioned Hans and Wassili Luckhardt, working with Franz Hoffmann, to build a prestigious brick villa in the Westend district of Berlin. Designed in the Expressionist style, it was made over in the modernist 'New Objectivity' style in 1928. Today it is one of Berlin's protected architectural monuments.

Eugen Buchthal was also a passionate collector of contemporary art. His collection included, for example, works by Otto Müller, Emil Nolde, Lyonel Feininger, Wilhelm Lehmbruck, and Franz Marc, many of which had been purchased directly from the artists.

Eugen Buchthal and his family were persecuted by the National Socialists because they were Jewish. The eldest son Hugo, who had studied under Panofsky, emigrated in 1934 to London, where he worked at the Warburg Library, followed by the daughter Anne Gerda in April 1936 and, later, the youngest son, Wolfgang. In May 1936, Buchthal sold the family residence at 22 Lindenallee, but continued to live there until he emigrated. He had already delivered a large number of graphic works from his art collection to Galerie Nierendorf in the January of that year. Some of them were acquired in the same month by the Staatliche Museen zu Berlin. In 1938, Buchthal and his wife finally emigrated to London, where he died in 1954.

The Kupferstichkabinett had purchased sixteen works from Eugen Buchthal's collection through Galerie Nierendorf. Some of them were seized in 1937, in the course of the Nazis' 'Degenerate Art' campaign, so that today only nine still exist: two lithographs by Erich Heckel, three etchings by Wilhelm Lehmbruck, an etching by Paula Modersohn-Becker, a woodcut by Emil Nolde, a lithograph by Otto Müller, and an etching by Ernst Ludwig Kirchner. 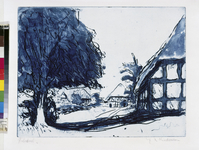 The work that has now been repurchased by the Foundation is the test print of an etching (image: 26.7 x 34.7 cm, sheet: 36.6 x 47.8cm). In the summer of 1908, Ernst Ludwig Kirchner traveled to the island of Fehmarn in the Baltic Sea for the first time. While staying there, he produced several etchings, of which only a few specimens have survived. One of the peculiarities of 'Houses on Fehmarn with a Large Tree' is that this etching is among the very few graphic works that Kirchner printed in blue. Besides the sheet in Berlin a test print signed by Kirchner and designated as such there are only three other blue specimens. The printing plate has been preserved in the Staatliche Kunsthalle (State Art Gallery) Karlsruhe, while the corresponding painting & with matching motifs is on display in the Städel in Frankfurt, on loan from a private owner. From a stylistic point of view, the print is not a 'typical Kirchner' and may rather be classified as Post-Impressionism. So this work has a special status among the many and varied works by Kirchner in the Kupferstichkabinett as a representative of 'pre-Kirchner' Kirchner, so to say. In the context of the collection, it serves as an ideal opener for a series of works that also originated on Fehmarn in the course of the following years.