Q&A: Andrew Tauber recalls his family's long quest to retrieve the 18th century painting, and the settlement that has closed this saga. 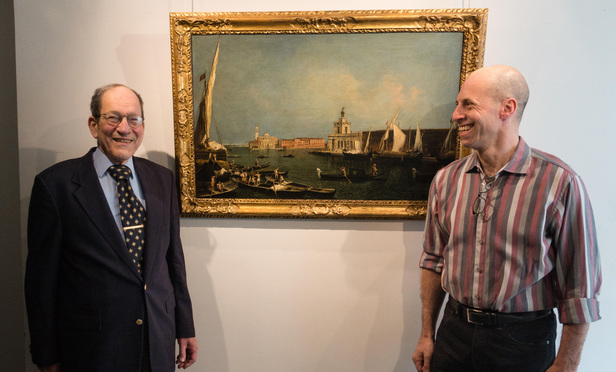 On a Sunday in late April, Andrew Tauber, a Mayer Brown partner in Washington, boarded a plane for Paris, where he and his father planned to spend an hour alone with a painting that his grandparents, the original owners, had sought for so long but did not live to see again.

When he walked into the private viewing room at Sotheby's, Tauber recalled being struck physically and emotionally by the 18th century painting, "La Punta della Dogana e san Giorgio Maggiore," from the Italian artist Michele Marieschi.

"I had only seen a black and white photo of it," Tauber, 54, said in a recent interview. "I had never seen it in color. To see the vibrant colors was breathtaking. To see the way the artist plays the light, the incredible detail of the workers' legs as they worked on the dock.”

A partner in Mayer Brown's U.S. Supreme Court and appellate practice group, Tauber had briefed and argued myriad disputes—medical devices, railroad injuries, asbestos claims. He turned to a different set of skills to help resolve, through a settlement, the nearly eight-decade saga of the Marieschi painting, stolen from his family by the Nazis. Sotheby’s is preparing to auction the work next month.

In our conversation with Tauber, excerpted below, he shared his family's history, their hunt for the painting and his role as chief negotiator in bringing the artwork out of the shadows.

NLJ: When did you first become aware of the importance of the painting to your family?

Tauber: I've known about the painting ever since my childhood. I was very close to my grandparents growing up and spent a considerable amount of time with them. In the course of growing up, I heard pieces of the story. It was part of the family history.

What is some of that history?

My maternal grandparents were Viennese Jews. They bought the painting in 1937. Germany annexed Austria in 1938. My grandparents fled for their lives across the Italian border. In preparation for migration, they placed all of their possessions in storage with the idea they would have their possessions shipped to them. Events overtook them. It took them three years to escape and get to the United States in 1941. Once the war was over, in 1945, my grandfather attempted to recover their possessions in storage. He was informed the Gestapo seized all contents in 1940 and they were probably sold at public auction.

The painting resurfaced in London in 1952. We have no idea what happened to it between 1940 and 1952. The general attitude of those times was: the Jews are dead; they're not coming back for their property.

Why was the painting so special to your grandparents?

My grandfather had been trained as an architect and worked in finance, and my grandmother loved art. I developed an appreciation for art through my grandmother, who took me to all the great museums in New York where they lived. My grandmother spent most of her childhood in Trieste and had an affinity for Italy. It’s a beautiful painting by a master of a scene in Venice. It spoke to her love of art and Italy.

Was the return of the painting a central focus of their lives here?

No. My family was among the lucky families. We got out alive. They came to the U.S. as refugees and built new lives here. Their focus was on that. At the same time, they did not forget what happened to them and what was taken from them.

My grandfather had correspondence with the Occupation authorities to no avail. He died when I was 13. A few years later, my mother and her twin sister contacted the Art Law Register, which then took out an ad in the Art Newspaper declaring the painting to be stolen property. Charles Beddington, who has some affiliation with Christie's, saw the announcement and realized he had seen the painting. He informed us but declined to disclose either the name of the possessor or the location citing a confidentiality agreement with Christie's. We go to Christie's and say it's stolen property; please disclose the possessor and location. Christie's declined.

Did you go to court to get the disclosure?

We sued in Boston district court to compel Christie’s to disclose. They forced us to go to England, where, in conjunction, with the Jewish Community of Vienna, we filed suit in London in the High Court of Justice, Chancery Division, in late 2004.  Christie's was ordered to divulge the owner's name—Bryan Jenks, a British industrialist who left Britain for Monaco. He died in 2013 at age 94. In the early 2000s, the Jewish Community of Vienna attempted to approach the possessor and enter into a dialogue. He literally refused to engage, did not respond at all.

I think we ultimately shrugged our shoulders and got on with our lives. But then about three years ago, I received a call out of the blue from an attorney—Christopher Marinello of Art Recovery International in Venice, saying he had been approached by the then possessors of the painting and wanted to start a dialogue. Jenks had died and the painting passed into a trust. Because it was a stolen painting, they could not sell it on the open market. They wanted to get clear title to sell.

How did you respond to the request for a dialogue?

I said yes. Of course I was interested in recovering the painting. We spent two years in negotiations. Part of the time, I spent doing research to document the claim and the rest of the time negotiating with the holders of the stolen work. It culminated in a settlement agreement. I have no idea how many times it went back and forth. It was an extended negotiation with many, many drafts exchanged. From my family's perspective, the proper resolution would have been the return of the stolen painting to our family. As the old saying goes, possession is nine-tenths of the law, and the trust has physical possession and had tremendous negotiating leverage.

How did the private viewing of the painting in Paris occur?

Sotheby's helped smooth this entire process. They set up the private viewing room. It was just wonderful. I'm now 54 years old. I've known of this painting for half a century. We had been working so hard to reach a settlement. For the first time in my life to see this painting that had hung in my grandparents' home was very moving.

Emotionally, how did you feel at this moment?

It was certainly bittersweet at some level. My grandparents—Heinrich and Anna Maria Graf—are long dead. My mother, Erika, had died in the interim. My father and my aunt, Eva Glaser, each have three children. My aunt, who is 84, could not make the trip. If we had gotten the painting back, none of us could have hung it in our homes. It would have been donated to a local museum in Boston and we would have looked at it periodically and others too could have enjoyed it. As ambivalent as we may feel about the terms of the settlement, one unambiguous part of reaching settlement is that this lovely painting can now come out of the shadows to be enjoyed.