Bern is positioning itself as a Swiss hub for research into Nazi-looted art. The city’s Museum of Fine Arts is to shortly take possession of the first artworks from the controversial Gurlitt collection. 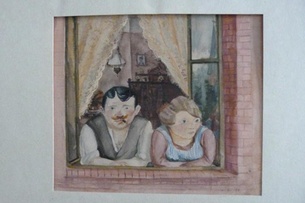 Wilhelm Lachnit: Man and woman in the window, 1923

The museum was the unexpected heir to the collection when the reclusive hoarder, the German Cornelius Gurlitt, died in May 2014.

Gurlitt’s trove of more than 1,500 artworks – including art by Pablo Picasso, Henri Matisse, Claude Monet, Max Beckmann and Otto Dix – was inherited from his father, Hildebrand Gurlitt, a dealer who worked for the Nazis in occupied France. Hildebrand Gurlitt bought art stolen from Jews as well as purchasing pictures from Jewish collectors who were desperate to raise money to flee the Third Reich.

With funding from the Swiss federal government and private donors, the Museum of Fine Arts has now set up a provenance research department of four employees. The May announcement said Nikola Doll had been appointed to head the new office. The University of Bern Institute for Art History is planning to set up a new teaching post for provenance research and is talking to potential sponsors.

Nina Zimmer, director of the Museum of Fine Arts and the Zentrum Paul Klee (Paul Klee centre), said additional funding would be very welcome since “there are currently rather few provenance researchers in Switzerland”.

For the first time last year, the Federal Office for Culture awarded grants for this kind of specialist research, allocating government financing of CHF908,000 to 10 museums. This is a sign, Zimmer said, of a shift in attitude towards Nazi-looted art in Switzerland since the Gurlitt bequest.

“Today it is impossible to separate the Gurlitt collection from the discussions that it provoked and the significance it had in Switzerland in the debate about Nazi-looted art,” Zimmer added. “Gurlitt sparked a discussion and led to international attention on the Swiss politics of provenance research. All this contributed to a shift in thinking."

Suspicion-free art to come to Bern

The Museum of Fine Arts hesitated before accepting Gurlitt’s bequest and the responsibility it entailed, only agreeing to it after the German government pledged to conduct provenance research on the collection. So far, five works in the collection have been identified as Nazi loot, of which four have been returned to the heirs of the original owners. Only works free of suspicion will enter Switzerland.

Zimmer sees the latest development as an opportunity for Bern to become a centre of excellence for investigating stolen art.

She believes Bern is in an excellent position to shed light on this dark chapter of 20th century history. “It is the seat of government and parliament, and also home to the Institute for Art History and several other museums for which provenance research is important. Parliamentary groups come to us for information.”

The museum is digitising its archives from the era of the Third Reich to make them accessible to researchers and is also investigating its own collection. While research has already been conducted on the artworks in the Bern collection, this has not so far been published in detail – one of the tasks for the new provenance research team.

The Museum of Fine Arts is also supporting the research into the Gurlitt collection undertaken by a team at the Magdeburg-based German Lost Art Foundation, with one colleague working in Berlin. Under the terms of the agreement with the German government, the team will continue the research until the end of the year. “Then there will be further talks about this if the research hasn’t been completed,” Zimmer explained.

The first works from the Gurlitt collection will arrive in Switzerland before exhibitions of the collection take place simultaneously in Bern and Bonn in November. The Bern show will focus on artworks that were confiscated from museums in Germany as part of the Nazis’ virulent campaign against art they perceived as “degenerate.”

Zimmer is particularly interested in the works by Hildebrand Gurlitt’s contemporaries in Dresden – the Brücke group of artists including Ernst Ludwig Kirchner and Otto Müller, Dix, but also other lesser known artists such as Christoph Voll and Otto Griebel.

“There is a whole list of names that people don’t necessarily know – not through any fault of their own but because the Nazis destroyed their lives and banished their work,” Zimmer said.

“These are the artists [Hildebrand] Gurlitt knew personally and how he became acquainted with modern art – they influenced his taste and his world view. I feel that he had an unerring sense of quality in this area. In other areas his choices were sometimes a bit random.”

The Museum of Fine Arts received two grants of CHF100,000 each from the Federal Office for Culture, which it is obliged to match with its own funds. It has also received private donations from the Rudolf and Ursula Streit Foundation, the Ursula Wirz Foundation, and a third sponsor who wishes to remain anonymous. The funding secured so far is enough to ensure the four-person team can work for two years.

Nina Zimmer says they will have to fight to win long-term financing and a long-term structure. “We can only achieve this if our work is successful. We will have to show what progress we are making.”