NORMAN, Okla. – A painting that was displayed at the University of Oklahoma is now halfway across the world. 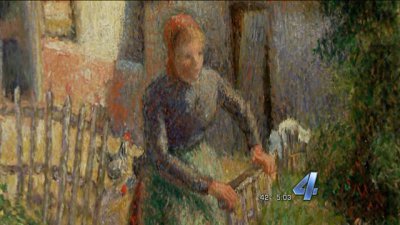 A French family contacted Oklahoma lawmakers several years ago regarding the painting ‘Shepherdess Bringing in Sheep.’

They say it was stolen from their family decades ago by the Nazis during World War II.

Years later, it was donated to the Fred Jones Jr. Museum of Art on the campus of the University of Oklahoma in Norman.

For more than two years, the family and the university fought over the rightful owner the painting before reaching an agreement in 2016.

The university and the Meyer family agreed to share the painting, allowing it be displayed at a museum in France for five years before rotating, and being sent back to OU.

On Monday, the university announced that the painting had returned to France.

However, some Oklahoma lawmakers say they are still troubled by the entire ordeal.

“It is absurd that the University of Oklahoma would act as if they have done a noble thing by returning a piece of stolen art to France. From the moment that the University of Oklahoma discovered the painting was stolen, university administration, led by President David Boren, has fought tooth and nail to prevent this painting from returning to its rightful owner. In order to accommodate a wealthy donor, President Boren went as far as spending hundreds of thousands of dollars to keep the art away from its rightful owner – a family that was nearly destroyed during one of the darkest periods of humanity,” said Rep. Mike Ritze.