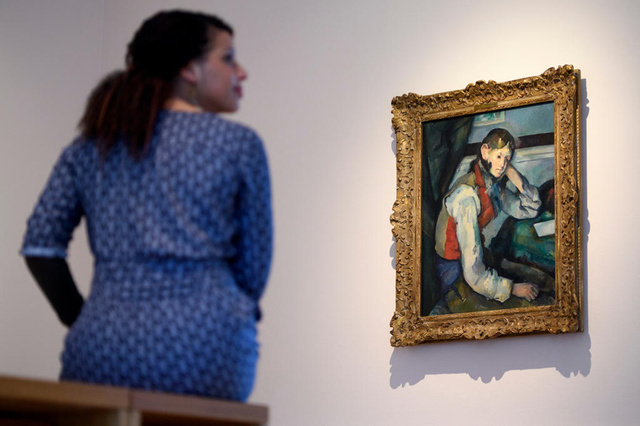 A woman looking at "The boy in the red waistcoat" by Paul Cézanne, one of the main paintings from the Bührle Collection on show at Lausanne's Fondation de l'Hermitage museum (Keystone)

A collection of Impressionist and post-Impressionist masterpieces built up by Zurich arms dealer Emil Georg Bührle (1890-1956) are on display at Lausanne’s Fondation de l’Hermitage museum. Over the years Bührle and his collection have struggled to shake off their controversial shadowy past. But new initiatives are underway to improve transparency.

Perched high above the city of Lausanne near Lake Geneva, the Hermitage art museumexternal link show displays famous works by Van Gogh, Cezanne, Monet, Degas, Sisley, Picasso and Modigliani. In all, there are 54 paintings from the Bührle Collection - considered one of the most important of European paintings in the world.

“It perpetuates a concept dear to 20th-century art collectors: art history seen as an ongoing development of different art movements. While focusing on Impressionist and Post-Impressionist paintings, Bührle always saw them as part of a larger art history which went back many centuries,” Lukas Gloor, director and curator of the Zurich-based Bührle Collectionexternal link Foundation, told swissinfo.ch. From Monet to Picasso Bührle Collection masterpieces on show in Lausanne

Bührle was a German-born industrialist who moved to Zurich and received Swiss citizenship in 1937. He made his fortune via his Oerlikon machine-tool company, which sold arms to the Nazis and the Allies during the Second World War. From June 1940 to September 1944, his fortune rose from CHF144,000 to CHF127 million.

A trained art historian, Bührle was also a passionate collector, especially 19th and early 20th-century French art, which he bought mainly between 1951 and 1956.

“Three-quarters of the collection was built up in the last six years of his life,” said Gloor. “He was a very systematic, serious collector.”

In all, he acquired 633 works of art, mostly paintings. In 1960, his family set up a foundation to bring together a representative selection of 203 paintings and sculptures for public display. The other 430 paintings remain with the family.

However, over the years the collection has struggled to free itself from its shadowy past. As business flourished, Bührle bought around 100 works in the 1940s, of which 13 turned out to have been stolen by Germans from Jewish owners in Occupied France.

After the war, Switzerland’s Federal Court ordered him to hand back these works, but later declared him innocent and compensated him. The Swiss justice authorities said he had acted in ‘good faith’. The industrialist later bought back nine of these paintings.

In 2015, a book entitled “Bührle’s Black Book,” rekindled the controversy surrounding the industrialist and called for greater openness vis-à-vis the collection, which is due to be housed in an extension of Zurich’s Kunsthaus fine arts museumexternal link in 2020.

“It is problematic because he bought looted works of art that he could never have bought without the persecution of the Jews. Some of them he did buy in full knowledge that they had been looted. He bought them because they were on offer and because he wanted them desperately. Although the works in the collection were later on legally acquired they will always be tied to their history,” art historian Thomas Buomberger, one of the book’s co-authors, told swissinfo.ch.

The authors criticized the fact that Switzerland, unlike Germany, does not legally differentiate between stolen art and so-called ‘Fluchtgut’ - intentional sales made under duress by owners of artworks who were facing persecution and possibly fleeing for their lives.

Hans-Ulrich Jost, a historian and honorary professor at Lausanne University who contributed to the book, is categorical. Whenever the Bührle collection is exhibited, it is important to explain to the general public who was the man behind the collector, where the money came from which was used to buy the paintings and where they originated.

“We shouldn’t minimize certain aspects of the collector’s personality. Because basically we’re not just talking about Emil Bührle, but part of Swiss history during the Second World War and the way in which we behaved vis-à-vis the National Socialist regime in Germany. Our government supported Bührle. If he was allowed to deliver weapons to the Germans, it’s because they then left us in peace,” he told Le Temps newspaper recently.

“He was blacklisted by the Allies after the war as he sold weapons to the Germans upon the instruction of the Swiss government, which had to find a way of manoeuvring the country through those extremely difficult years,” he commented. “There were export controls and from 1938 onwards no cannon would leave Switzerland without the government knowing about it.”

After the war was over things changed, however.

“He became a Swiss citizen but continued speaking High German [as opposed to the Swiss German dialect],” Gloor noted. “He was never really closely accepted into Swiss establishment and it was easy for the Swiss to point at him as the culprit for everything that had gone wrong during the war years.”

To be more transparent, the authors of the Bührle’s Black Book urged the Kunsthaus and the foundation to set up a documentation centre at the Zurich museum and to open up the archives to independent researchers.

The foundation says it has nothing to hide and is taking steps to open up the collection. It has digitalized the archives and is putting them online. It is also publishing a complete list of the 633 works bought by Bührle, with details about prices, dates and owners. The Kunsthaus plans to present information about the Zurich industrialist’s arms dealings during the war. In Lausanne, a small room has been set aside with letters and other archive and biography material of the controversial industrialist.

For Gloor, who has been responsible for the collection for the past 15 years, it is “highly unlikely” that other cases of looted art will be found in Bührle's collection in the future. But he admits that Bührle’s history remains ‘a shadow that accompanies the collection’.

“I keep pointing to the fact that the pictures themselves cannot be blamed,” he told swissinfo.ch.