A new way to track cultural assets looted by Nazis

Following up on over 31,000 tips, researchers at six German libraries have been cooperating on a project aimed at locating the owners of books that were looted during the Nazi era. 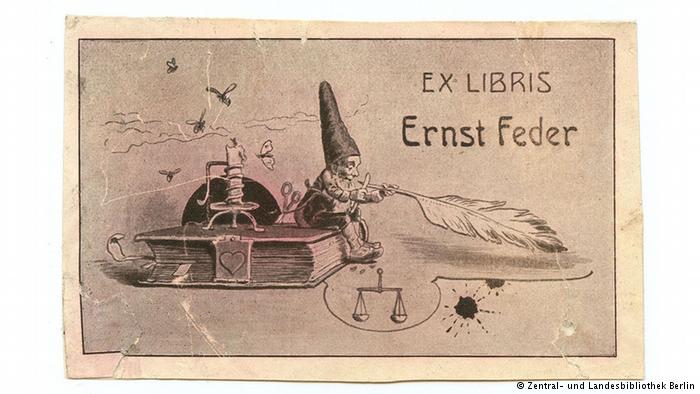 Sebastian Finsterwalder is a researcher who seeks to uncover the provenance of books that were looted by the Nazis during the 1930s and 40s. A member of a small but engaged team at Berlin's Central Library, Finsterwalder and his colleagues have already been able to locate the original owners of several books and return them. The results have been documented systematically in the central database "Looted Cultural Assets" for the last year. The database can be viewed online and has already received positive feedback, Finsterwalder told DW in a recent interview.

Sebastian Finsterwalder: Books are just one of many fields of research. There is also provenance research that has been done for musical instruments, furniture, household goods and cars. It's a broad field. Every object leaves traces. Images, especially, leave a trail due to their uniqueness as artistic works.

Books, on the other hand, are mass produced. Individual books don't tell me anything unless there's a stamp, an autograph, a number, "Ex Libris" or something else inside. That means that we have to uncover traces to determine who was in possession of the book.

A year ago, you and several colleagues presented a novel in cooperation with public libraries called "Looted Cultural Assets." What was your goal in doing so?

We did it with the objective of exchanging information amongst ourselves. Officially, we are a loose alliance of provenance researchers at six libraries, and in that respect, we are not a club or organization. Every library in Germany as well as in Austria that has an old stock of books has works in their possession that were looted by the Nazis - and not just a few.

How do you go about tracking the original owners? Is there a risk that the handling of books, like the addition of new bindings from the library, would eliminate traces?

Yes, that happened for several decades and still occurs in many libraries today. In the Central Library of Berlin, we have trained our book binders to avoid this. Still, we continuously find books that have a page torn out or a stamp that has been stickered over. Or, sometimes, things have simply been eradicated. For a long time, this was a targeted tactic with the aim of repression. We no longer withdraw any books that were printed before 1945 because the process of determining who the original owner was takes quite a bit of time.

How does one determine that a book was previously part of a Jewish person's private library and was stolen after 1933?

Books are a mass produced product and therefore only become one-of-a-kind when an owner or person who comes into the book's possession leaves a trace, or when a library uses a distinct number or signature. We are looking therefore, not necessarily for a particular book that was stolen after 1933, but for individual books to see if they contain any particularities that provide clues.

How systematic are you in doing so? The Nazis banned a number of cultural institutions as well as unions, Jewish cultural organizations and community libraries and looted their collections. Are you specifically looking for their collections?

We take up everything. The normal process is grabbing a camera and snapping pictures throughout the bookshelves as fast as we can. We have to look through several hundred thousand books. Of course we find books from all the groups that were persecuted in party-affiliated and union libraries. We also have many books from Masonic lodges, cloisters and Jewish centers.

In the past, the owners of a private library often had "Ex Libris" stamps in their books. How much do these assist in researching the former owner?

It's always nice to find something that clear. These "Ex Libris" are unbelievably useful for identifying books, especially when they have a personalized "Ex Libris," which contains information about the individual, whose name we can look into further. Doctors often use a stamp with a piece of medical equipment, chemists use a lab flask, musicians inscribe a note on the upper left.

In the library here, we have a collection of "Ex Libris," which comprises over 800 individual samples. They have been separated from the books during repair work. Unfortunately, it wasn't noted which of these came out of which books. Even these "Ex Libris" were returned to their original owners as a sort of restitution. But then it's just this small slip of paper without the book.

How far do you have to go when wishing to return these historical editions to their rightful heirs? Is there a legal report such as one made by a forensics expert doing an autopsy?

That will happen in any case where we restitute the book. I write a note in the file for the Board of Trustees here in house who then are made aware that this item should be restituted back on Person x or y for the following reasons. I look at how the book got into our hands, what could we uncover about the previous owner and what happened. Is it clear that this happened as a result of a Nazi-related dispossession?

Everything goes on record. We write an explanation of the return to the heirs, the legal representative or the family members who will be receiving the returned book. Mainly this is done for practical reasons because we can make room for books we might eventually find in the future, since we are continuously adding new books to the database and reviewing our collection. We are constantly finding books that have the same provenance, the same owner.

How do you uncover who the previous owner was? Do you also turn to "Lost Art" so that people in other countries can look at your work?

It's a different case each time. We might find them or they might find us. The idea behind the database is that the names are indexed on our website. It's been the case that people write to us and say they've found the website and their great-grandfather's name is on it: what does that mean? That's how numerous returns were made and to be honest, that's exactly what the goal was with this database.

Editor's Note: Looted cultural assets is the term used to describe cultural works and valuables which were taken from their rightful owners both in Germany and abroad during the Nazi era, from 1933 to 1945. More information can be found at http://lootedculturalassets.de