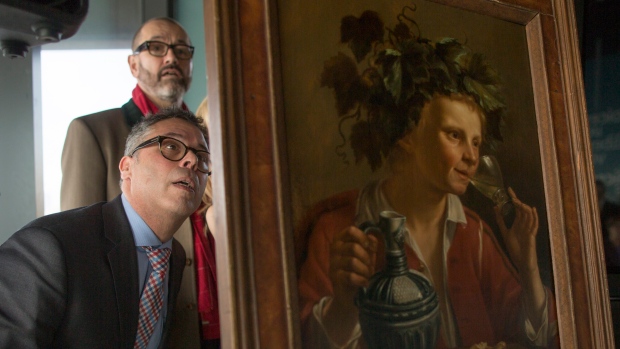 Dr. Clarence Epstein, foreground, director of the Max Stern Art Restitution Project, inspects the back of "Young Man As Bacchus" by Jan Franse Verzijl during a ceremony to formally return the painting to representatives of the Max and Iris Stern Foundation on Wednesday at the Museum of Jewish Heritage in New York. Federal investigators recovered the 1630 oil painting in a 2015 art fair. (AP Photo/Mary Altaffer) (The Associated Press)

A 17th century painting stolen by the Nazis during World War Two and recovered by the FBI in 2015 has been returned to the Max and Iris Stern Foundation based at Montreal's Concordia University.

The painting "Young Man as Bacchus" by Jan Franse Verzijl (1599-1647) was recovered after an anonymous tipster noticed it at an art fair in New York City in May 2015.

The FBI seized the painting and notified the Italian gallery that had consigned it to the fair — the Luigi Caretto Gallery in Turin — of its provenance.

The FBI said the gallery did not hesitate to waive its claim of ownership once it knew how the painting was obtained from Stern.

It was formally returned to the Max and Iris Stern Foundation Wednesday at a ceremony at New York's Museum of Jewish Heritage.

The painting's recovery marks another success for the foundation's Max Stern Art Restitution project, which has secured the return of 16 paintings since its inception in 2002.

Project co-ordinator Clarence Epstein said Verzijl was an artist from Gouda in The Netherlands who was a relatively unknown master of the Caravaggio tradition.

Epstein compared the recovery of such paintings to a "needle in a haystack" and attributed its discovery to "a rigorous archival and historical method."

He said there are still about 400 Stern-owned paintings that have yet to be recovered that could have a value of between $50 and $100 million.

Fled Nazis, ended up in Montreal

Max Stern owned the influential Galerie Stern in Düsseldorf, Germany, during the 1930s. Nazi restrictions on Jewish art dealers forced him to close the gallery 1937.

The Nazis made Stern put his inventory up for sale and many works from his collection were sold at auction. Other paintings from private collections owned by Stern and his mother were confiscated by the Gestapo.

Stern fled Germany prior to the start of the war and eventually settled in Montreal, where be became director of the Dominion Gallery of Fine Art.

Stern developed the Dominion into one of the most successful commercial galleries in Canada and championed the work of Canadian artists such as Emily Carr and Lawren Harris during their lifetimes.

He left the bulk of his estate to Concordia University, McGill University and Hebrew University of Jerusalem after his death in 1987.