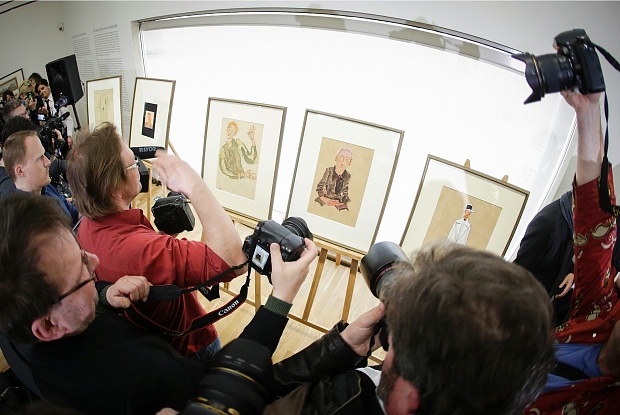 The Leopold Museum in Vienna has agreed to return two drawings by Egon Schiele, including a self-portrait, to the 95-year-old descendant of Karl Mayländer, six years after an Austrian commission recommended the works be restituted. Three further works by Schiele from Mayländer’s collection, Girl Squatting on a Flower Meadow (1910), Self-portrait in White Suit and Panama Hat (1910) and Bended Male Nude Back View (1908) will remain at the Leopold Museum.

The Austrian culture minister Josef Ostermayer described the deal as a “Solomonic solution” at a press conference today, 7 April. The politician had stepped in when negotiations between the museum and the New York-based heir came to a stand still. “The question was how to dissolve the hardened positions and come to a face-saving solution where both sides are satisfied,” Ostermayer said.

Mayländer, a businessman and art collector, was deported to Lodz, in German occupied Poland, in 1941, where he was murdered by the Nazis. Before leaving he gave works from his collection to his partner Etelka Hoffman who sold them after 1945. In 2010 the so-called Michalek Commission concluded that under Austria’s restitution laws, a state-run institution would be obliged to return the five works. But this does not apply to the private museum even though it receives some state funding.

Hans-Peter Wipplinger, the new director of the Leopold Museum, said in a statement: “I see it as our central task and obligation to deal with the past and to remember the impact of the atrocities of the Nazi regime.”

The Jewish Community of Vienna, which has been campaigning on behalf of the heir, said in a statement that it is pleased that “the wait is over”.