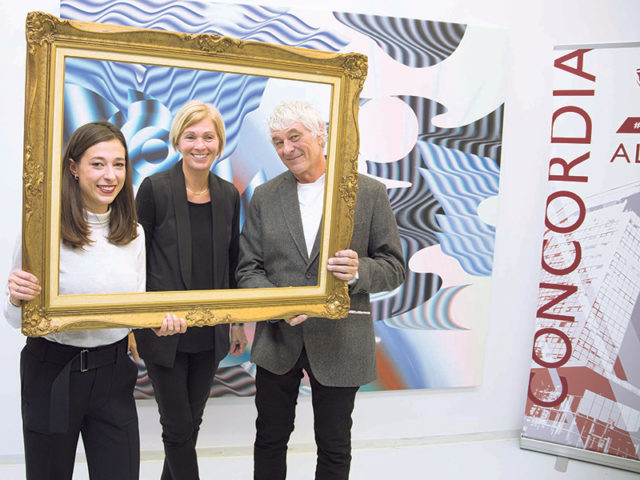 Edith Jorisch, left, the granddaughter of the late Georges Jorisch, and his children Natalie and Stéphane Jorisch get in the picture at the launch of the Jorisch Family Art Residency.

The descendants of a Montreal man who several years ago recovered paintings worth tens of millions of dollars that had been looted from his Jewish family by the Nazis have established a student art residency in his native Austria through Concordia University.

Georges Jorisch died in 2012, only a year after the restitution of two Gustav Klimt masterpieces and a valuable work by Ferdinand Georg Waldmüller. He had lived modestly and obscurely in Montreal since 1957 and owned a camera store for many years.

His four children and grandchildren have established the Jorisch Family Artist Residency, which will annually provide support for one Concordia fine arts graduate student to study in Salzburg for a month.

“Our family has always been connected to the arts in some way or another and now we are following through with our father’s wishes,” son Stéphane Jorisch said at the official inauguration on Nov. 21 at Concordia. The younger Jorisch is a Governor General’s Award-winning children’s book illustrator.

“History has come around and it feels good to give back to the arts.”

The two Klimts, Church in Cassone and Litzlberg on the Attersee, had belonged to Georges’ great-uncle, Viktor Zuckerkandl, a Vienna steel magnate, and his wife Paula. When they died childless in 1927, their home and its contents were passed to Viktor’s sister Amalie Redlich and her daughter Mathilde, Jorisch’s mother.

Jorisch fled Austria with his father when the Nazis entered in 1938. They spent the war in hiding, settling in Brussels. His mother and grandmother remained in Vienna, and were deported to the Lodz ghetto in Poland in 1941. They did not survive the Holocaust.

After the 1938 Anschluss, his grandmother placed her art collection in storage with a shipping company. After the war, Jorisch and his father discovered the works were gone.

Jorisch, the sole heir after his father’s death, began seriously searching for the paintings in the 1990s after changes in laws in Europe made the recovery of art despoiled during World War II more feasible.

Church in Cassone sold at auction for over $45 million in 2010 in London, and Jorisch split the proceeds with the unidentified private party that had returned it.

Litzlberg on the Attersee was restituted to Jorisch in 2011 by the state-owned Museum of Modern Art in Salzburg. Later that year, it was sold for $40 million at an auction in New York. Again, Jorisch divided the proceeds with the museum under a confidential agreement.

Jorisch also contributed to the restoration of a section of the museum, with the proviso it be named in honour of his grandmother.

The selected Concordia student will fulfil the residency at the Amalie Redlich Tower, as the section is called. Jorisch had stipulated that a Canadian artist be given a residency there each year.

With the donation of $250,000 to Concordia’s fine arts faculty, that wish can be realized. Stéphane said they chose the university because it has one of the largest and most comprehensive fine arts faculties in Canada.

Jorisch donated the Waldmüller painting to the Montreal Museum of Fine Arts in gratitude to the city where he found refuge after the war.

“We are grateful to the Jorisch family for creating this unique opportunity… where our fine arts students will benefit from what is sure to be a transformative experience,” said Concordia president Alan Shepard.

The formal launch of the residency program coincided with the premiere of granddaughter Edith Jorisch’s documentary that chronicles her grandfather’s life and years of searching for his rightful inheritance. L’héritier aired on Télé-Québec that night.

“My grandfather never gave up,” she said. “I will always admire his courage and determination.”

It seems that seeing an image of Church in Cassone on the cover of an art book he noticed in an Old Montreal bookstore some 20 years ago set Jorisch on his quest. He was not interested in money for himself, said his son, but wanted a secure future for his wife Eliane and their four children, who had grown up with little, and grandchildren, who now number 10, before it was too late.

In related news, two Dutch Old Master paintings that were among a collection of more than 400 works German Jewish art dealer Max Stern was forced to liquidate by the Nazis prior to the war will be restituted to his estate in a ceremony at the Canadian embassy in Berlin on Dec. 12. They were recovered with the assistance of German auction houses.

The Max Stern Art Restitution Project has been administered by Concordia since 2002. Over the past 10 years, 13 other paintings have been recovered. Stern, owner of the Dominion Gallery on Sherbrooke Street, left the bulk of his estate to Concordia, McGill University and the Hebrew University of Jerusalem.