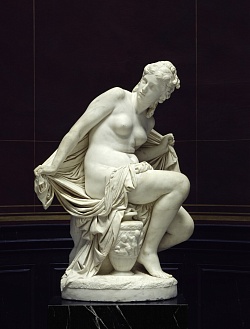 A marble sculpture called Susanna by Reinhold Begas, on display in Berlin’s Alte Nationalgalerie, has been restituted to the heirs of a Jewish media mogul whose most prestigious newspaper was forced to close when the Nazis seized power.

The sculpture, dating from 1869, will remain on loan to the Berlin museum for now, the Prussian Cultural Heritage Foundation says.

Rudolf Mosse was one of the three richest men in Berlin at the turn of the 19th century. His palatial neo-Baroque home on Leipziger Platz was filled with paintings, sculptures, antique furnishings and tapestries. His collection included works by Max Liebermann, Carl Spitzweg, Wilhelm Leibl, Hans Makart and Adolph Menzel.

Mosse’s flagship publication was the liberal, non-partisan Berliner Tageblatt newspaper, a staunch advocate of democracy even before the Weimar Republic. After his death in 1920, Mosse bequeathed his estate to his daughter, Felicia Lachmann-Mosse. His powerful publishing house was managed by his son-in-law Hans Lachmann-Mosse.

Under the Nazis, Berliner Tageblatt quickly became a symbol of the hated “Jewish press.” Felicia and Hans Lachmann-Mosse fled to Switzerland in 1933 and later emigrated to the US. Their possessions, including the inherited art collection, were seized and sold at auction in 1934. The family had no share of the proceeds.

The Mosse Art Restitution Project was set up by the family's heirs in 2012 to trace the missing works. The Prussian Cultural Heritage Foundation returned eight works in 2015, including a monumental lion by the artist August Gaul.

Other artworks recently restituted include a painting by Carl Blechen that the Kunsthalle Karlsruhe agreed to buy back from the family in June, after identifying it as Nazi loot in 2014. In October, the Jewish Museum in Berlin returned an oil sketch by Anton von Werner. It was a preparatory work for a large painting showing Mosse hosting a dinner party that was commissioned in 1899 for his dining room.