On emotional first visit to Israel, Edmund de Waal, heir to the mighty Ephrussi banking dynasty wiped out by Nazis, says his bestselling ‘The Hare with Amber Eyes’ is his proactive means of restitution 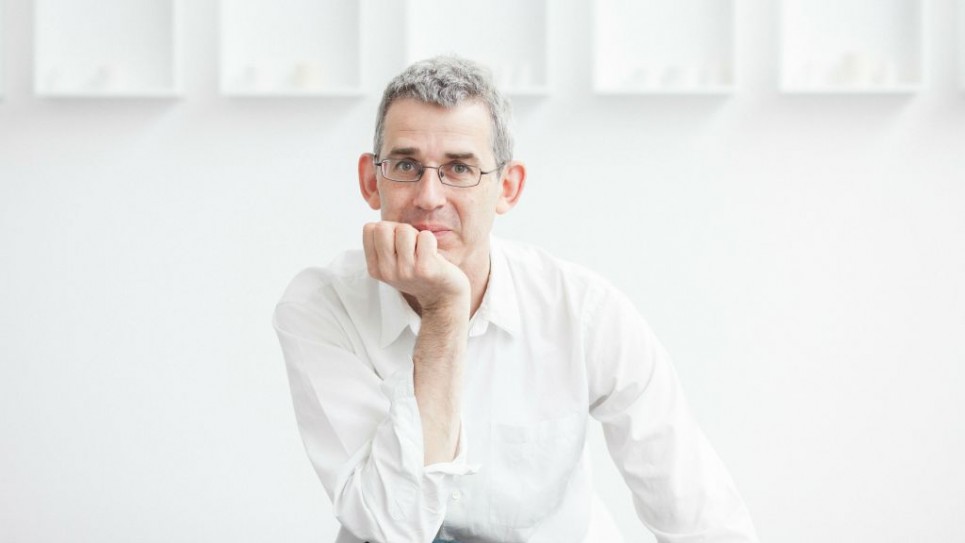 Celebrated British ceramicist Edmund de Waal has traveled the world, but until last week he had never been to Israel. At age 52, he finally made it to Jerusalem where he delivered the keynote address at an international conference on collecting and provenance at the Israel Museum.

The large crowd packed into the museum’s main auditorium was appreciative of de Waal’s pottery, but what it was most interested in hearing from the artist was the amazing story recounted in his 2010 family memoir, “The Hare With Amber Eyes.” The book has sold a million and a half copies and been translated into 30 languages. It tells the history of the Ephrussis, a Jewish family of bankers, historians, art-lovers and intellectuals whose fortunes rivaled those of the Rothschilds.

Having cornered the grain market from their headquarters in Odessa, members of the Ephrussis family spread out across Europe in the 19th century, setting up banks and other businesses in Vienna, Paris and London. The family lost everything with the Nazi Anschluss of Austria in 1938.

The extent of the Ephrussis’ wealth, their prominence in European society, and the rich complexity of their lives was completely unknown to de Waal, who grew up with only a marginal sense of the history of his paternal grandmother Elisabeth’s Ephrussis ancestors. 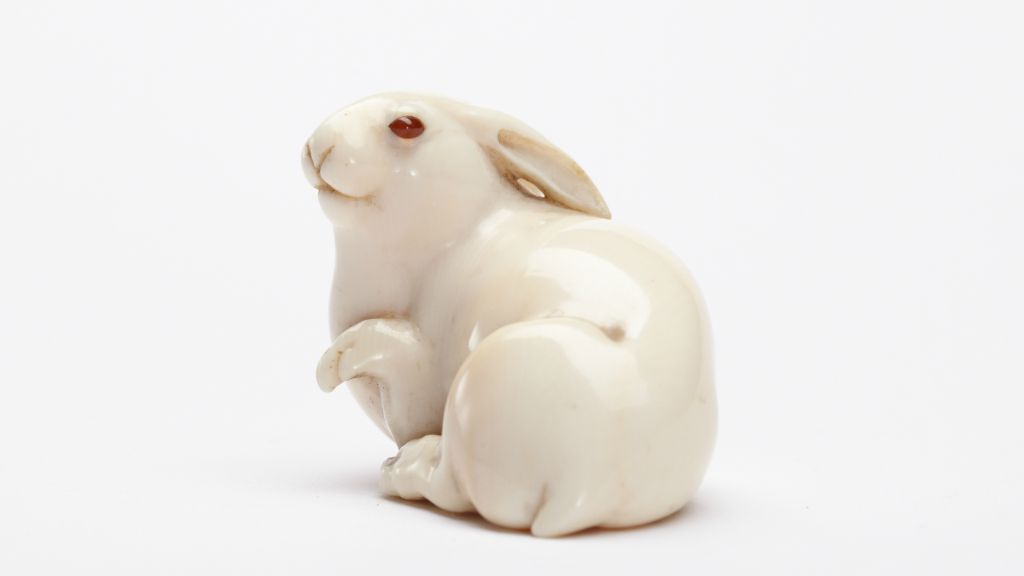 Ivory netsuke, the hare with amber eyes in the title of Edmund de Waal’s family memoir.

The artist had a typical British upbringing in Canterbury, where his father, the Rev. Dr. Victor de Waal, was the dean of the city’s historical cathedral. It wasn’t until de Waal inherited 264 netuske (Japanese miniature sculptures in ivory and wood) upon the death of his great uncle Ignace (Iggy) Ephrussi in Tokyo in 1994, that he started to wonder more about the Jewish side of his family. He instinctively knew that the netsuke, handed down among the generations, were the key to unlocking the Ephrussi saga.

De Waal brought the netsuke to his London home and displayed them in an unlocked glass-door cabinet. They were “objects that sat untidily in in [his] life,” compelling him to set out on what became a seven-year quest. The odyssey revealed not only the journey of the miniature sculptures — from Japan to Paris to Vienna to England to Tokyo to London — over a century and a half, but more importantly the lives of the Ephrussi family members who owned, admired and touched them.

At the Israel Museum, de Waal, who recently published “The White Road,” about the history of porcelain, reviewed the narrative of his first book, endearing himself to the audience with his unassuming nature, self-deprecating humor, and unbridled emotion.

Upon his return to his London studio two days later, de Waal spoke to The Times of Israel by phone about his art, his understanding of restitution, and why being in Jerusalem moved him to tears. 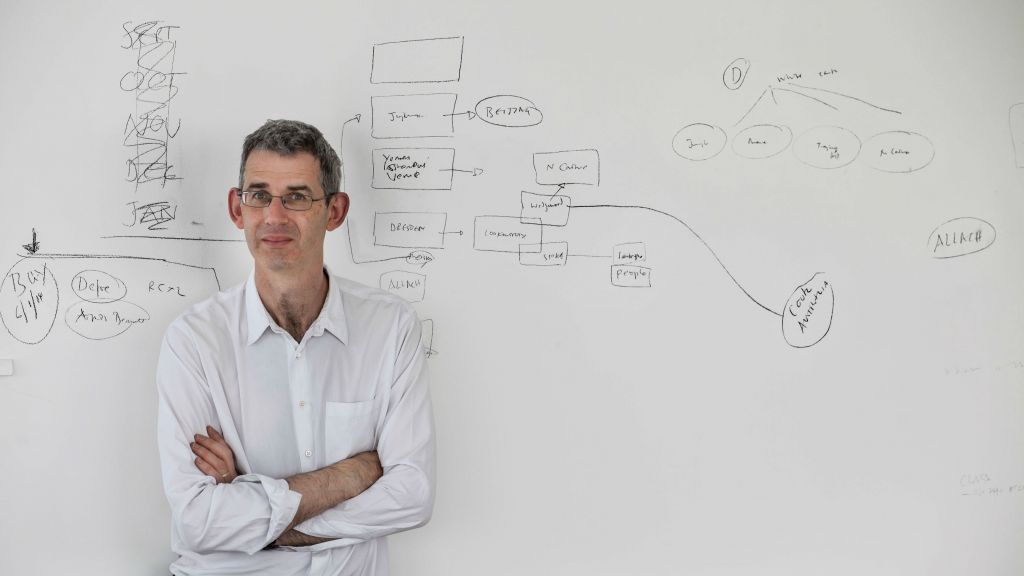 You were visibly emotional — even crying at times — during your keynote address at the Israel Museum. What brought that on?

I’ve talked in many places in the world to many audiences. But the reality of telling this particular story to this particular audience in this particular place was pretty important for me. What was I going to do? Just be there in some kind of half-hearted way?

It was a big deal for me. It was my first day [ever] in Israel. I was telling this story amongst people who had parallel, intersecting, and resonant stories of their own. I don’t normally cry in public. I don’t choose to be emotional when I can help it, but that was the reality of it for me that evening.

How has researching and writing “The Hare With Amber Eyes” affected your sense of self?

It’s been huge — absolutely extraordinary — in terms of making sense of myself in terms of my own identity. It is a connection to family in a different way, meaning that it makes sense of diaspora and of the fragmented family that I’ve grown up in. For me it makes sense of a lot of the oddness and silences with my father. It’s really important in terms of working out who I am in the world.

Was it challenging to turn art provenance research into prose?

That wasn’t the problem. It wasn’t a provenance art historical narrative. That is a byproduct that other people may find in it. It was actually my trying to pay my real dues to someone I loved who’d given me this problem. And then by doing that, it turned into this extraordinary, complicated, multilayered, long thing that has provenance and all kinds of complexities at its heart, but actually begins as a story, almost as a quest.

Is it correct that at this point, your family is not pursuing restitution claims for art and other valuables stolen by the Nazis?

I don’t think there has been a collective decision about that… It may be that down the line my brothers or cousins may choose to [make claims]. At a certain point my grandmother decided to go no further. It wasn’t a defeat for her. It was a change of direction. That was very clearly her call. Generationally everyone decides to do different things, to shake down the story a different way.

There’s absolutely no doubt there are still a lot of lost pictures, a huge number of lost possessions, a lost library. A lady asked at my talk if I got the bank back. I answered that no, I didn’t. And someone else said to me that I seem very resigned, and that I don’t seem angry. That is ridiculous. I’m completely angry. I’m not remotely resigned about that.

You’ve said that “The Hare With Amber Eyes” is your restitution. How so?

What I want to do with that anger is something that is in my control, so I choose not to wait for a government to change a law, or for a lawyer to find something, or a museum to give something back or do a negotiation. All of that is in other people’s control. What is in my control, keeps me interested, and gets me up in the morning is to tell a story on my own terms about my own family. As soon as I have done that, then I think I have done restitution. I haven’t waited for anyone else to do it. I’ve done it. Getting expensive pictures back is wonderful, but I am not waiting for that. I am doing it myself and that feels to me the more powerful action.

At its heart, restitution is storytelling. That’s why it matters to us as a community. The rest of it — the law, the art history side of it, the cultural complexity of sorting out everything else having to do with claims and legality — all of that comes after the absolute basic thing, which has to do with objects telling stories because someone cared about them.

After having grown up so rooted in Englishness, it must have been jarring to discover that your cosmopolitan Ephrussi ancestors moved around Europe and had multiple national allegiances.

Perversely it’s exactly the opposite. The Englishness and all that kind of stuff was considerably more complicated than actually being out in the world and being on the road. That whole process over those years of traveling, and the discovery of that multiple-ness associated with my Jewishness, actually makes so much more sense. That’s not a kind of romantic affiliation with an adopted bit of narrative. It’s real for me. That feels much closer to who I am and how I choose to be. And my work as an artist, as well as a writer, is of a piece with that. 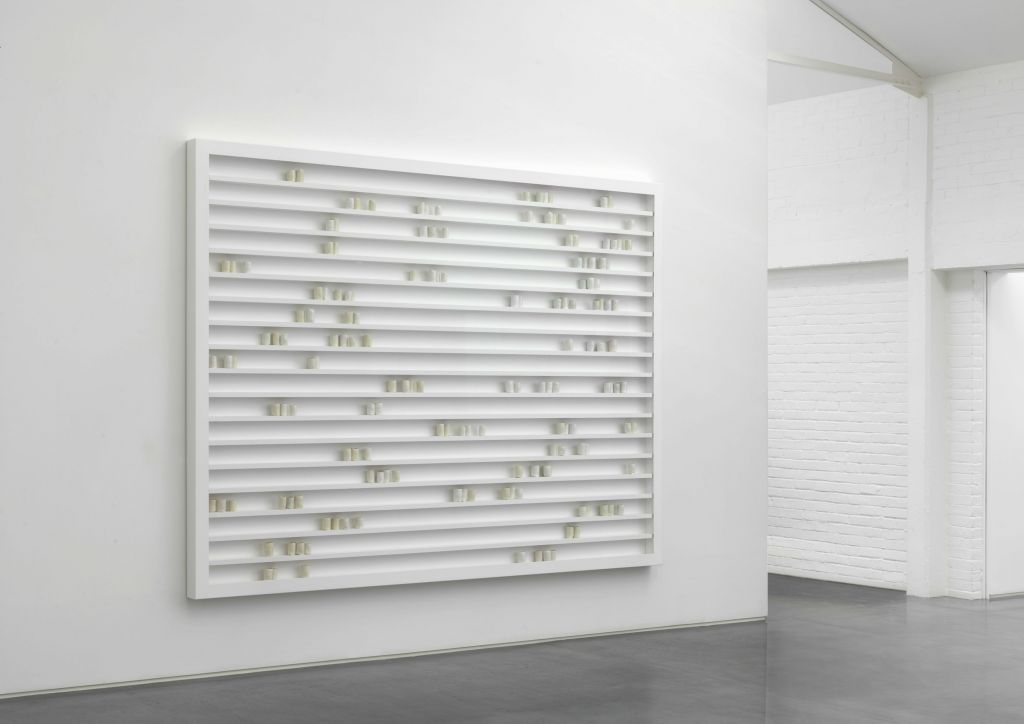 Front view of ‘a place made fast’ by Edmund de Waal, 2014. 160 porcelain vessels with gilding in a wood, aluminum and glass cabinet.

How has your art changed?

My work was always about collecting. I think my work is now about collecting and survival, collecting and loss, and collecting and place. The projects I’ve chosen to do — whether in Berlin, Vienna, London or New York — have changed the relationship of where objects sit in relation to one another. I hope these installations are more resonant of this life of objects that I feel much closer to. By that, I mean the kind of enormous strength and enormous fragility around objects simultaneously. They are totally breakable. They all end up as shards. But at the same time there is a huge amount of poetry and storytelling in that process. A lot of this is the territory that I explore in the book, and it’s the territory of being a potter — and they come together.

At the Israel Museum, you spoke of three key questions: What do you leave behind, what do you take with you, and what do you pass on?

Those are the questions you live with. Those are decisions that people are making every day of their lives (or have made in the past), and they are questions you must attend to. There is an imperative there.

But isn’t one of the main takeaways from your book that we don’t always have agency over these questions?

Agency is exactly the right word to bring into this really interesting conversation. At what point do you have agency? I was given this series of objects. My agency was my turning that into a story about what was latent in those objects. But I have no agency about what happens to that story next.

This was your first visit to Israel, and it was a very short one. Can we expect you to return, and for longer?

This has been the craziest autumn of my working life. I’ve been working all around Europe and America, but I wanted to accept the invitation to come to Jerusalem, even if I could only be there for 36 hours. What I got was an extraordinary powerful sense of necessity to return.

This is as much for the people as it is for the city, the history, the resonance, the symbolism and anything else. It is about feeling very strongly connected in terms of the questioning and the conversation around restitution and storytelling. I’m coming back.

To see video interviews with Edmund de Waal, click on the link below.