Paintings That Bear the Scars of War 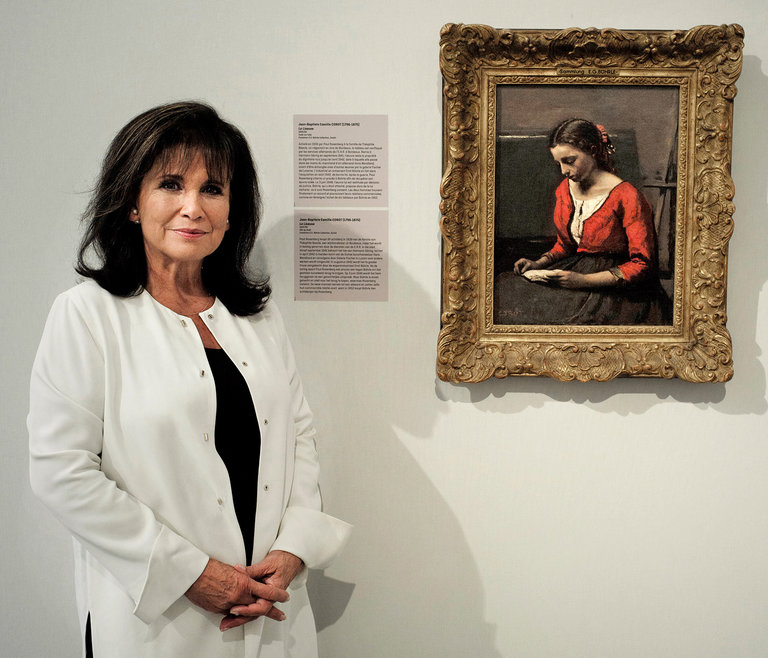 Anne Sinclair next to a Camille Corot painting at La Boverie.

LIÈGE, BELGIUM — A looted Matisse portrait of a woman in a blue dress with white frills is displayed not far from a black swastika and a life-size photo of Adolf Hitler in uniform, striding away from a hazy Eiffel Tower.

Paintings rarely get to share war stories in a museum exhibition, especially works like Matisse’s “Blue Dress in a Yellow Armchair” that have been pillaged, traded and salvaged by many hands. But this pensive painting is a testament to a dark history: ransacked by Nazis from a bank vault in 1941; shipped to Hitler’s second in command, Hermann Göring; and then ultimately displayed in a Norwegian museum until 2014, when it was returned to its rightful owners.

That work and others by Picasso, Léger, Degas and Corot represent the legacy of Paul Rosenberg, a Jewish art dealer who amassed a vast collection in his silk-lined gallery on Rue la Boétie in the 8th arrondissement of Paris. Rosenberg and his family survived the war in exile in New York, but more than 400 paintings were lost — 60 of them are still missing — and it became his quest to reclaim them work by work.

Some of those disparate paintings are gathered for a reunion in “21 Rue la Boétie,” a roving exhibition of art and war history that began last month at La Boverie, the newly renovated Fine Arts Palace in this eastern Belgian city. The show will move to the Maillol Museum in Paris early next year and eventually to Jerusalem and New York. (Those events that are still being finalized, according to organizers.)

The 63 works — which all passed through Rosenberg’s galleries in New York and Paris — have been lent by private collectors and European and American museums. The show honors the art dealer and his relationships with emerging avant-garde artists like his next door neighbor, Picasso, and Georges Braque. It also explores state-sponsored looting during World War II with photographs and anti-Jewish posters, and propaganda produced in Rosenberg’s ornate gallery and enormous townhouse, which was commandeered by the Nazis in 1941 to create an office for the Institute for the Study of the Jewish Question.

“The idea is that this is a form of justice to expose the works that were plundered, stolen, and vanished,” said Anne Sinclair, the art dealer’s granddaughter, who is a well-known French television journalist and the editorial director of Le Huffington Post. Her 2012 book, “My Grandfather’s Gallery,” inspired the exhibition. She also helped enlist collectors to make loans and aided the show’s designers, Tempora, a Brussels design company.

The exhibition does not include Matisse’s “Seated Woman/Woman Sitting in an Armchair,” which was recovered by the Rosenberg family last year. The long-vanished painting of a woman in an embroidered blouse was discovered in 2012 in the art trove hoarded by Cornelius Gurlitt in his Munich apartment. Organizers said that it still needed restoration before it went public. 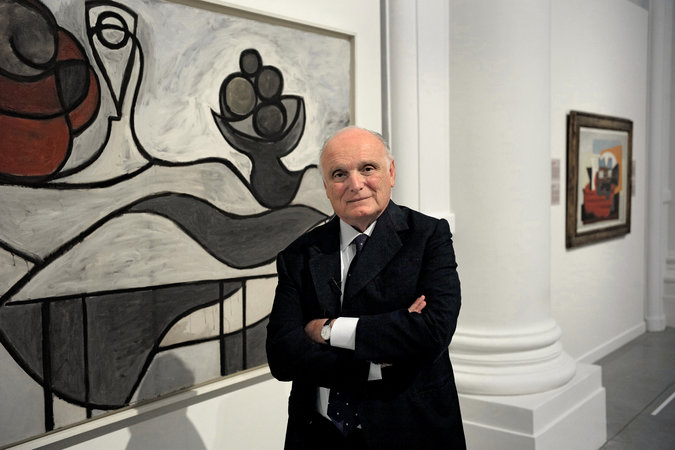 David Nahmad with his Picasso painting.

But there are other major works with somber pedigrees, like a Picasso portrait of Ms. Sinclair’s grandmother on a tapestry chair with her chubby toddler in white and blue ribbons. It was stolen for Hermann Göring and then later recovered by Rosenberg soon after the war. “If it could only tell what it saw,” Ms. Sinclair said.

The exhibition has also brought together rare works from private collections still caught up in thorny debates about restitution and transparency about their wartime provenance.

For example, David Nahmad, an art dealer and a Monaco billionaire, is loaning nine of his works by Picasso, Matisse and other artists from his extensive collection, much of it stored in a freeport warehouse in Switzerland. For almost five years, he has been fending off a legal claim for his 1918 Modigliani portrait of a merchant, pressed by the elderly French grandson of a Jewish antique dealer and by a company specializing in recovering looted art for a percentage of a sale. Mr. Nahmad is attempting to dismiss the case, which is pending in New York State Supreme Court. He argues that long-sealed, French postwar court documents demonstrate they are chasing the wrong Modigliani portrait.

Mr. Nahmad, who is Jewish himself and was stung by widespread publicity over the case and his offshore Panamanian company, said his participation in the exhibition has nothing to do with his current legal struggle. But the ordinarily low profile dealer is playing a highly visible role in the show — including cajoling other private collectors to make loans and seeking to stage an exhibition at a New York museum that has not been announced yet.

“There is a lot of history in this exhibition and this is not a pure show,” he said, after appearing at the opening with Ms. Sinclair, who asked him to join the exhibition in April. “To see Hitler, the occupation, the gallery and the Institute for the Study of the Jewish Question... It touched me.”

The Emil Bührle foundation in Zurich is lending Camille Corot’s “A Girl Reading,” a tranquil portrait of a young woman in a red bodice that was plundered in 1941 from Rosenberg’s bank vault in Libourne, France, along with more than 160 paintings. It was purchased by Emil Georg Bührle, a wealthy arms merchant for the Nazis, who battled with the art dealer in court over looted works and reimbursed him for the painting in 1948 and returned others. Today a new extension is under construction to house his collection in the Kunsthaus, Zurich’s fine arts museum, and has provoked a debate about how much wartime history should be described in a permanent museum exhibition.

The exhibition is also helping to inaugurate the recent makeover of La Boverie, a 1905 building, which completed a 25 million-euro expansion by the architect Rudy Ricciotti last May. The show is financed in part by the city of Liège and by Belgium’s national lottery. The building also played a role on the eve of the war in 1939, when the local government raised money to buy nine works offered by Nazi authorities at a Lucerne auction in an effort to dispose of thousands of “degenerate” artworks, confiscated from German museums, by some of the greatest artists of the period, including Gauguin, Chagall, Matisse and Picasso.

Those purchases, such as Gaugin’s “Magician of Hiva Oa,” are on display in the show, as is a Picasso portrait of a picnicking family, “La Famille Soler,” that is exhibited next to a gauzy, traditional painting by Rodolf Otto of a German peasant family of parents and children to illustrate the Nazi taste for more sentimental, realistic works.

When the exhibition opened, Ms. Sinclair brought relatives to study cherished family portraits that she remembered from her childhood. She said that she is continuing her grandfather’s work, a reckoning of history so that the dead “may return less sadly to their graves.”