A much-exhibited early 19th century drawing, restituted in August to the heirs of a Holocaust victim, has immediately appeared for sale in Germany.

‘A Branch with Shrivelled Leaves’, a drawing by Julius Schnorr von Carolsfeld (1794-1872) which has been restituted to the family of Dr Marianne Schmidl. It is now being offered for sale at a Berlin auction with an estimate of €450,000.

A Branch with Shrivelled Leaves by the German Romantic Julius Schnorr von Carolsfeld (1794-1872) was previously part of the Berlin Kupferstichkabinett’s collection but will carry an estimate of €450,000 at Bassenge auction house in Berlin on November 25.

Since 2013, museums have returned about 15 artworks to the family of Dr Marianne Schmidl (1890-1942) whose whereabouts was last recorded in 1942 at a holding point for a concentration camp in German-occupied Poland.

A descendant of both Schnorr and his friend and fellow Nazarene artist Friedrich Oliver (1791-1859), she sold the family collection under duress in 1939.

It included several of the celebrated ink and pencil drawings on vellum of contorted leaves drawn by the artists while in Vienna c.1817. This one is a pen and grey and brown ink over pencil drawing on vellum. Measuring 4 x 11in (9 x 26cm), it is signed with the artist’s monogramme and is dated January 4, 1817.

As part of an agreement with the Schmidl heirs announced on August 17, a similar drawing from the series – Oliver’s Shrivelled Leaves – will remain in the gallery with an appropriate acknowledgment and financial compensation. 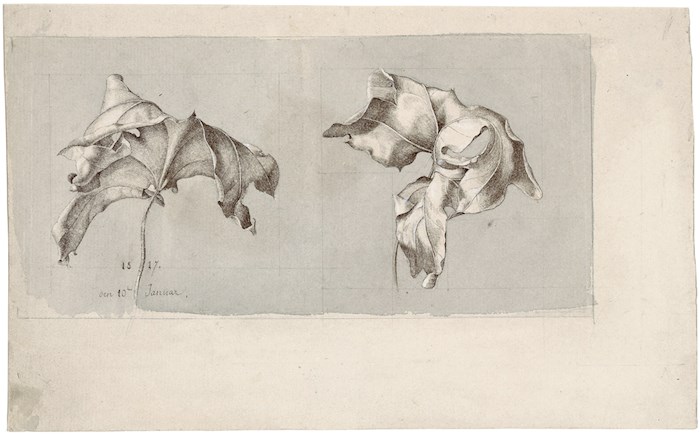 In 2014 Bassenge sold two other Schmidl family drawings that had been in the Berlin Kupferstichkabinett for decades prior to restitution.

The pen-and-ink drawing of decaying leaves for sale in November is also dated 1817 – the year before Schnorr and Oliver joined the Nazarenes in Rome.

It had been acquired by the National Gallery of Art in Washington, DC in 2007 as part of the Wolfgang Ratjen collection, when important details of Schmidl’s life were not generally known.