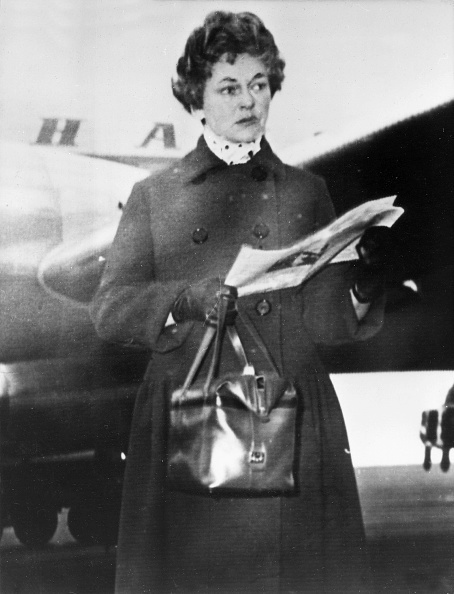 Just a few days ago, German newspaper, Süddeutsche Zeitung published findings of a bombshell report prepared by the London-based Commission for Looted Art in Europe (CLAE) showing that, after World War II, Germany returned Nazi-looted artworks to Nazi-connected families, rather than the victims they were stolen from.

The CLAE’s investigation was sparked by a claim from the family of Gottlieb and Mathilde Kraus, who fled Vienna in 1938. Many names are involved. Among other things, it includes a detailed account of how one Henriette Hoffmann-von Schirach—daughter of Hitler’s close friend and photographer, Heinrich Hoffmann, and wife of the notorious ‘Gauleiter’ [Hitler’s district governor] of Vienna, Baldur von Schirach—came by one painting, Picture of a Dutch Square, by Jan van der Heyden, that originally belonged to the Kraus family.

There’s a lot at stake. In total, the Kraus family is trying to recover roughly 160 artworks.

Today, the Bayerische Staatsgemälde-Sammlungen (Bavarian State Collections) responded with a lengthy, detailed statement calling the claims “false” and asserting that it “has made earnest and extensive efforts in provenance research in recent decades and has come to clear findings.” It further states that “the assertion that Bayerische Staatsgemäldesammlungen is not confronting its history and does not work in a transparent manner is false” (see full document below). 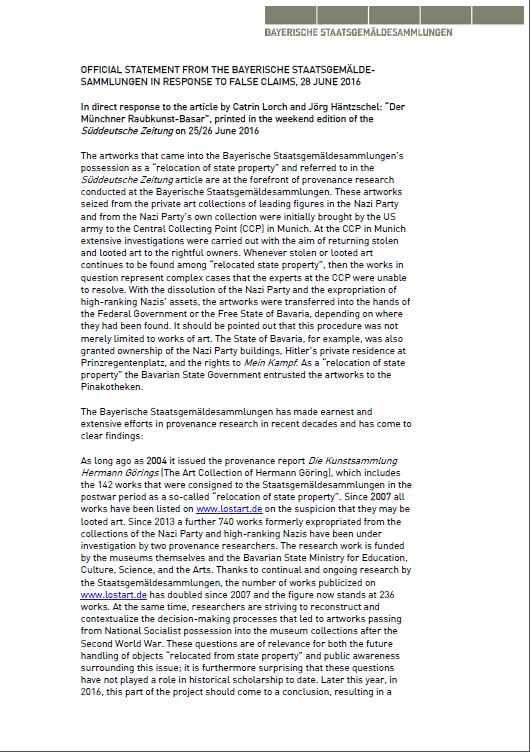 Their account amounts to a detailed, point-by-point response to CLAE. artnet News reached out to several experts on Nazi loot to get their take.

Attorney Nicholas O’Donnell, an art law expert who has handled restitution cases but is not involved in the Kraus case, was skeptical of the Bavarian institution’s defense. “The shocking thing about this story—which is also just depressing—is it shows once again that literal, actual Nazis got their paintings back because they said, ‘Oh no, I had that before the war. Trust me’,” he said via phone. “You can’t overstate the horridness of Henriette von Schirach or Emmy Goering. They come into the museum and they have tea with whatever official and say, ‘Well actually this was a family painting. Can I have it back ?’ And they say ‘Yeah, sure’.”

Calling the museum’s response “disingenuous,” O’Donnell said: “My immediate reaction to the statement is that it’s a classic case of ‘Thou doth protest too much.’ The biggest issue with the situation in Germany is who should be carrying the burden to get to the bottom of what happened with individual objects. And when you look at the statement with the context of recent events in mind, it’s a shell game… It’s ‘Look over here, we just hired these four people to do something, so see we’re working really hard on this issue. How dare you accuse us of not working hard on this issue?’ ”

Christopher Marinello, another lawyer who specializes in recovery, and is CEO of London-based Art Recovery Group, was also unimpressed. “I’ve seen the arguments on both sides of this dispute between Bavarian authorities and the Commission for looted art,” he wrote. “There is merit to what is being said…on both sides. However, what is clear is that it is 2016, 75 years after the war and we are still talking about Nazi restitution. I don’t doubt that German authorities have put the best researchers available onto this project (just as they have done in the Gurlitt case), but have they done enough? Almost two decades after the Washington Principles were signed there are still public collections that are not fully documented.   Heirs to the horrors of Nazi looting are passing on, memories are fading as time prejudices these legitimate claims to their past lives. Or is that the ultimate goal? To make these cases go away without having to deal with the inconvenient truth?”

In a statement emailed to artnet News, the CLAE also criticized the Bavarian authority (referred to by its acronym, BSGS), noting that its statement “is not accurate and in many places confirms CLAE’s concerns” (full document below). 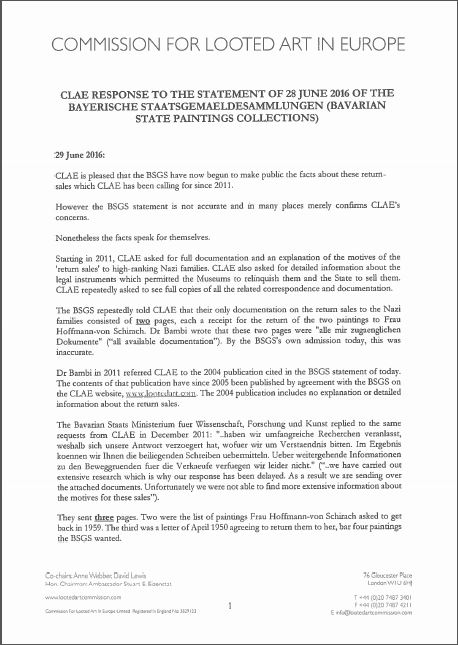 “The BSGS continues to rely on the slow pace of provenance research. It asserts the ‘complicated’ nature of these cases as a reason for the slow pace. It need be neither so slow nor so complicated. They refer to research into only a few hundred paintings. Yet 15 years ago the Director General… said there were up to 7,000 looted paintings in the [museums] which should be published. Transparency is so clearly what is needed.”