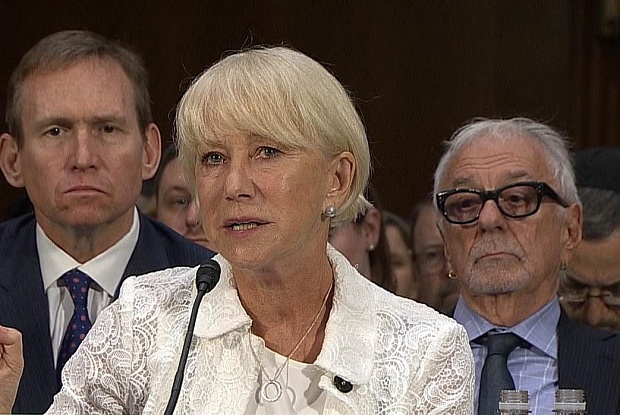 The British actress Helen Mirren, who portrayed Maria Altmann in the Hollywood film Woman in Gold, about the late Austrian-American collector’s fight to recover her family’s Nazi-confiscated art, testified on Capitol Hill today in support of a bill to make restitution in the US easier for heirs of Holocaust era victims.

“The very act of Nazi expropriation was not only unjust but it was inhumane,” Mirren told two Senate judiciary subcommittees in a joint hearing on the Holocaust Expropriated Art Recovery Act. “Greed, cruelty, self-interest and domination will always be with us, it's an easy option. Justice is so much more difficult, so much more complex. But we all dream of justice. We are incapable of changing the past, but fortunately we have the ability to make change today.”

The legislation was introduced into Congress in April and is sponsored by Republican senators Ted Cruz and John Cornyn of Texas and Democratic senators Chuck Schumer of New York and Richard Blumenthal of Connecticut. Mirren spoken along with a panel of other supporters of the bipartisan bill, including the collector and president of the World Jewish Congress, Ronald S. Lauder, and senators Al Franken (D, Minnesota), Chuck Grassley, (R, Iowa) and Orrin Hatch, (R, Utah).

“What makes this particular crime even more despicable is that this art theft, probably the greatest in history, was continued by governments, museums and many knowing collectors in the decades following the war,” said Lauder, who acquired Gustav Klimt’s painting of Adele Bloch-Bauer, Altmann’s aunt, after she successfully sued the Austrian government to have it returned. It is now a crowd favourite in the permanent collection of the Neue Galerie, the museum of German and Austrian art he co-founded in New York.

“Restitution is so much more, much more than that, than reclaiming a material good,” Mirren said. “It gives Jewish people and other victims of the Nazi terror the opportunity to reclaim their history, their culture, their memories and, most importantly, their families.”

The video of the two-hour hearing can be watched on CSPAN.