Why finding Nazi-looted art is ‘a question of justice’ 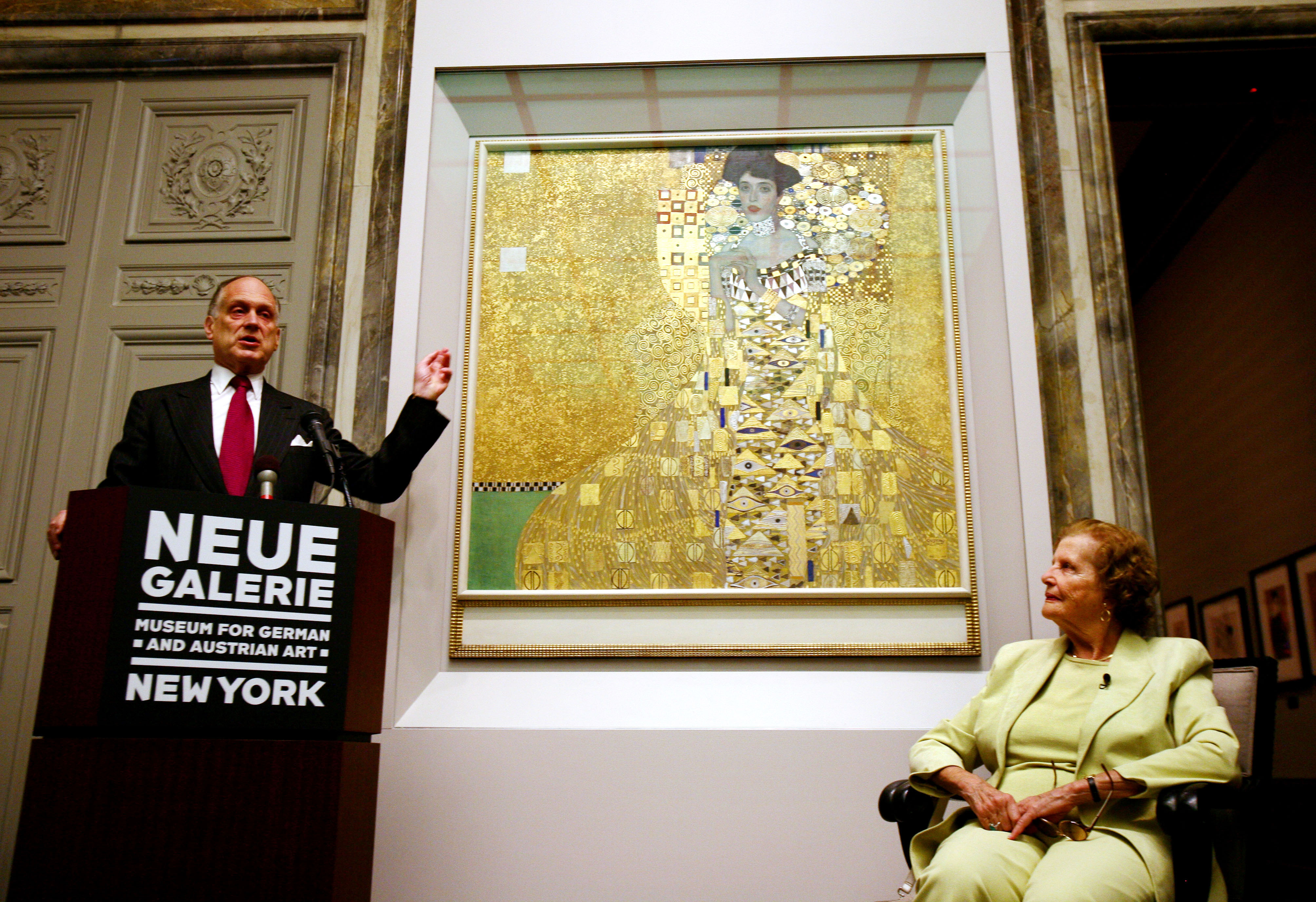 Ronald S. Lauder, President and co-founder of Neue Galerie New York, speaks to the press as Maria Altmann, heir to the Bloch-Bauer family, watches during a press preview announcing the acquisition of the Gustav Klimt painting “Adele Bloch-Bauer I” and four other paintings from the collection of Ferdinand and Adele Bloch-Bauer in New York, July 12, 2006. Photo by Shannon Stapleton/Reuters

Next Thursday, Sotheby’s will auction a 356-year-old painting that once hung in the Munich residence of Adolf Hitler.

“An Officer Paying Court to a Young Woman” by Dutch painter Gabriel Metsu could sell for $6-8 million — and the price tag is high, in part, because of that history.

After the war, the U.S. and its allies tasked a special unit of 350 army personnel from 14 nations to find and return looted art to its rightful owners. These so-called “Monuments Men,” who were popularized in a 2014 Hollywood movie, recovered millions of items and returned treasures like a 15th-century Ghent altarpiece to Belgium and “Lady with an Ermine,” a Leonardo Da Vinci painting, to Poland.

But the Monuments Men returned art to countries, not individuals, which sometimes put the heirs of Holocaust victims at odds with their home governments.

Over the next five decades, families embarked on an international scavenger hunt. They began making breakthroughs in the late 1990s following the resolution of Holocaust survivor claims against Swiss banks that had failed to return deposits to the heirs of Holocaust victims after the war.

Bernard Goodman, a Dutch Jew whose parents were killed in concentration camps, was forced to buy back 16 of his family’s paintings after they were returned to the Netherlands.

“These new governments were overwhelmed with all the problems after the war,” Simon Goodman, Bernard’s son, said. “The last thing they wanted to deal with was some annoying man like my father who said, ‘What happened to my mother’s teacups?’ Or even an important painting, or a priceless Renaissance gold cup.”

But a combination of political will and scholarship, starting with the book “The Rape of Europa,” sparked a global effort at art restitution. The Art Loss Register and the Holocaust Art Restitution Project compiled databases of missing works. Much of it was hidden in plain sight, sometimes hanging on the walls of museums or offered for auction. 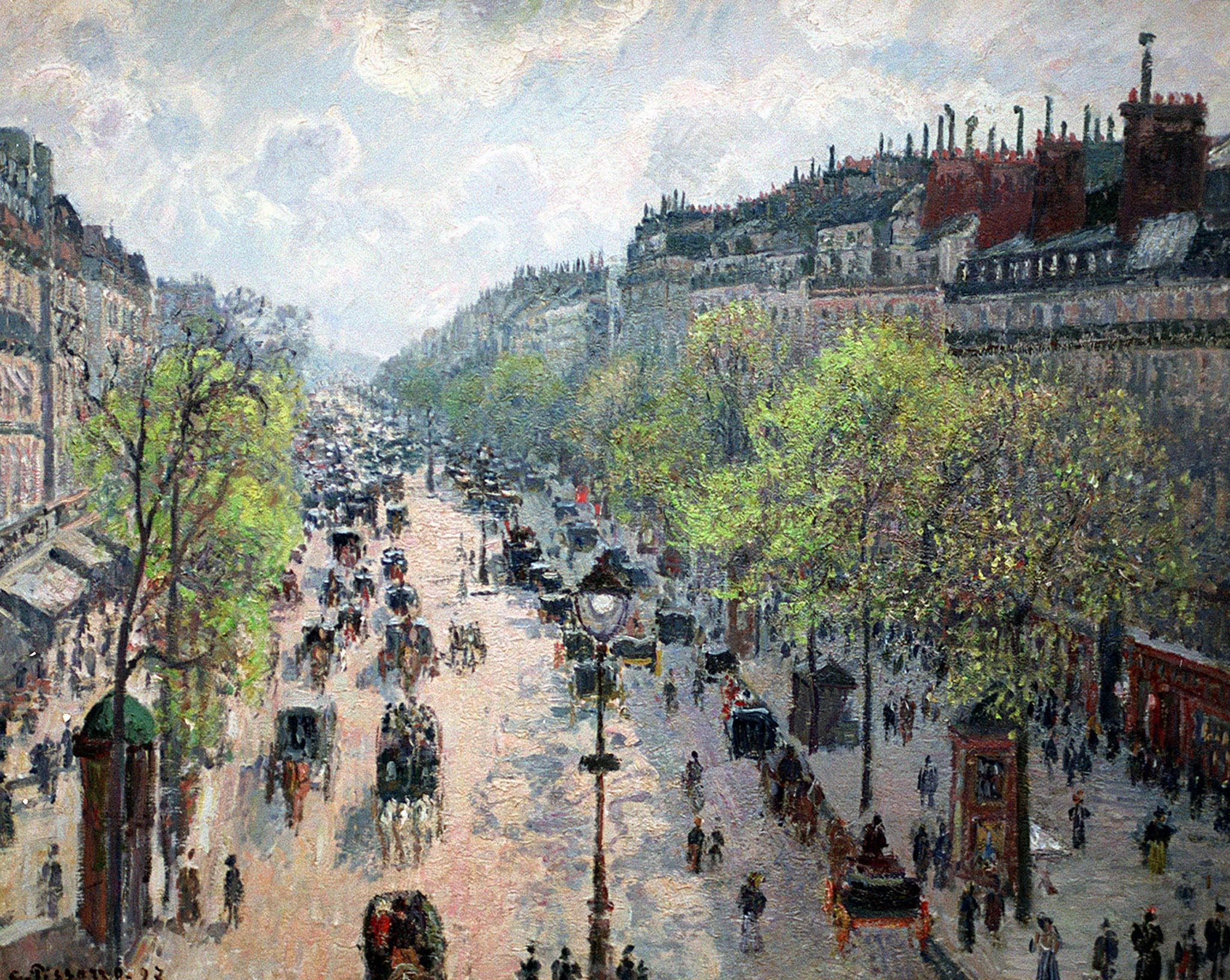 A photo reproduction of Camille Pissarro’s painting “Boulevard Montmartre, Spring 1897” hanging in the Israel Museum after the Israel Museum restored ownership of the painting to a Jewish family forced by the Nazis to sell it in 1935. Photo via Reuters

Museums, from the Louvre in Paris to the Hermitage in St. Petersburg and the Metropolitan Museum of Art in New York, began checking the ownership history, or provenance, of works on display and in storage. Auction houses Sotheby’s and Christie’s followed suit, as their sales catalogs had become road maps for art sleuths searching for missing works.

“We’ve improved, because the information available to us has improved,” said Lucian Simmons, a Sotheby’s vice president in charge of vetting art for any red flags in the provenance. “But I think our moral compass has always remained the same, and that is that we want to protect our buyers and our sellers and not sell looted art which hasn’t been given back.”

In 1998, 44 nations agreed to the Washington Principles on Nazi-Confiscated Art, which set forth 11 international legal guidelines for looted art restitution. The document included guidelines for collectors who are facing a claim by prewar owners and says the parties should aim for a “just and fair solution.”“This has nothing to do with money. It is about justice and a duty to remember.” — Leone Meyer, Holocaust survivor

The principles aim to protect both sides, Marc Masurovsky, co-founder of the Holocaust Art Restitution Project, said. “The purpose is to protect the rights of the current possessor and to offer the victim’s heirs some form of symbolic justice through a negotiated financial settlement,” he said.

As Simon Goodman picked up the trail of his family’s looted art, he discovered that “The Pear Tree” (1889) by Pierre Auguste Renoir, which the Nazis took from his grandfather, was sold by a Sotheby’s subsidiary in 1969 to a collector based in the British Virgin Islands. Goodman also learned Sotheby’s had sold a family-owned Renaissance painting, “The Young Man in a Red Cap” (1474) by Sandro Botticelli, to an Italian collector in 1985.

In both instances, Goodman settled his claims by agreeing to split the proceeds of a resale. “It’s rare that you just get a painting back when you have other people, collectors, who can argue, quite reasonably, that they’re purchasers in good faith — they paid out good money for something that they were told by an art gallery or an auction house was a legitimate artwork,” Goodman said. “Mostly, we have to accept compromises, because that’s the way the world works.”

“It’s a question of justice”

In the last two decades, tens of millions of dollars of looted art has changed hands.

In 1998, the heirs of Paul Rosenberg, once the exclusive Paris art dealer of Pablo Picasso and Henri Matisse, sued the Seattle Art Museum to reclaim a Matisse painting the Nazis had removed.

In 2000, a North Carolina museum returned a landscape by Renaissance painter Lucas Cranach to the heirs of an Austrian Jewish family and repurchased it.

The next year, the American Alliance of Museums published guidelines for checking collections and handling looted art. And in 2006, after suing all the way to the U.S. Supreme Court, Maria Altmann won restitution of her family’s paintings looted in Austria, including Gustav Klimt’s “Portrait of Adele” (1907), later purchased from them for $135 million by cosmetics billionaire and philanthropist Ronald Lauder and permanently exhibited at his Neue Gallery in Manhattan. 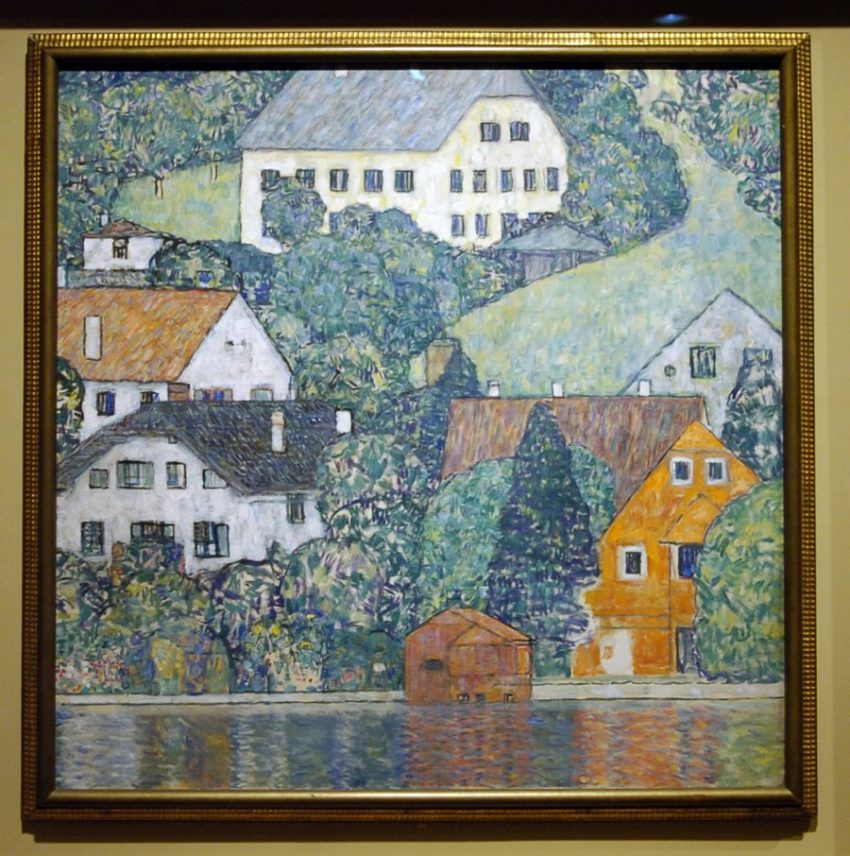 The 1916 painting “Houses in Unterach on Lake Atter,” part of a special exhibition of Gustav Klimt paintings looted by the Nazis during World War II, is seen at the Los Angeles County Museum of Art in Los Angeles on April 4, 2006. Los Angeles resident Maria Altmann won the return of the paintings from the Austrian government following a lengthy legal dispute over the rightful ownership of the paintings. Photo by Chris Pizzello/Reuters

“A lot of museums, I think, were in a quandary,” said Eric Lee, director of the Kimbell Art Museum in Fort Worth, Texas.

In 2006, the heirs of John and Anna Jaffe, British Jews whose collection was stolen by the Nazis in France, told the Kimbell that a 19th-century landscape by Joseph Turner, “Glaucus and Scylla” (1841), belonged to them.

Boston’s Museum of Fine Arts in 2003 hired the nation’s first curator dedicated exclusively to the provenance research, Victoria Reed. “If it’s stolen, we don’t want it,” she said. MFA has returned works it learned were stolen, on occasion initiating contact with families to inform them.

“It’s a question of justice,” Lee said. “And it’s becoming increasingly important as we get further and further away from World War II, because the original owners are dying, and even knowledge about collections is disappearing with each subsequent generation.”

How can universities and museums help?

Leone Meyer is an elderly Holocaust survivor who lost her entire family in Auschwitz. At seven, after the war, she was adopted by a French couple, Yvonne and Raoul Meyer, who had lost all their belongings during the war. Four years ago, Meyer contacted the University of Oklahoma to say a painting in its campus museum by French impressionist Camille Pissarro, “Shepherdess Bringing in Sheep” (1886), belonged to her family. 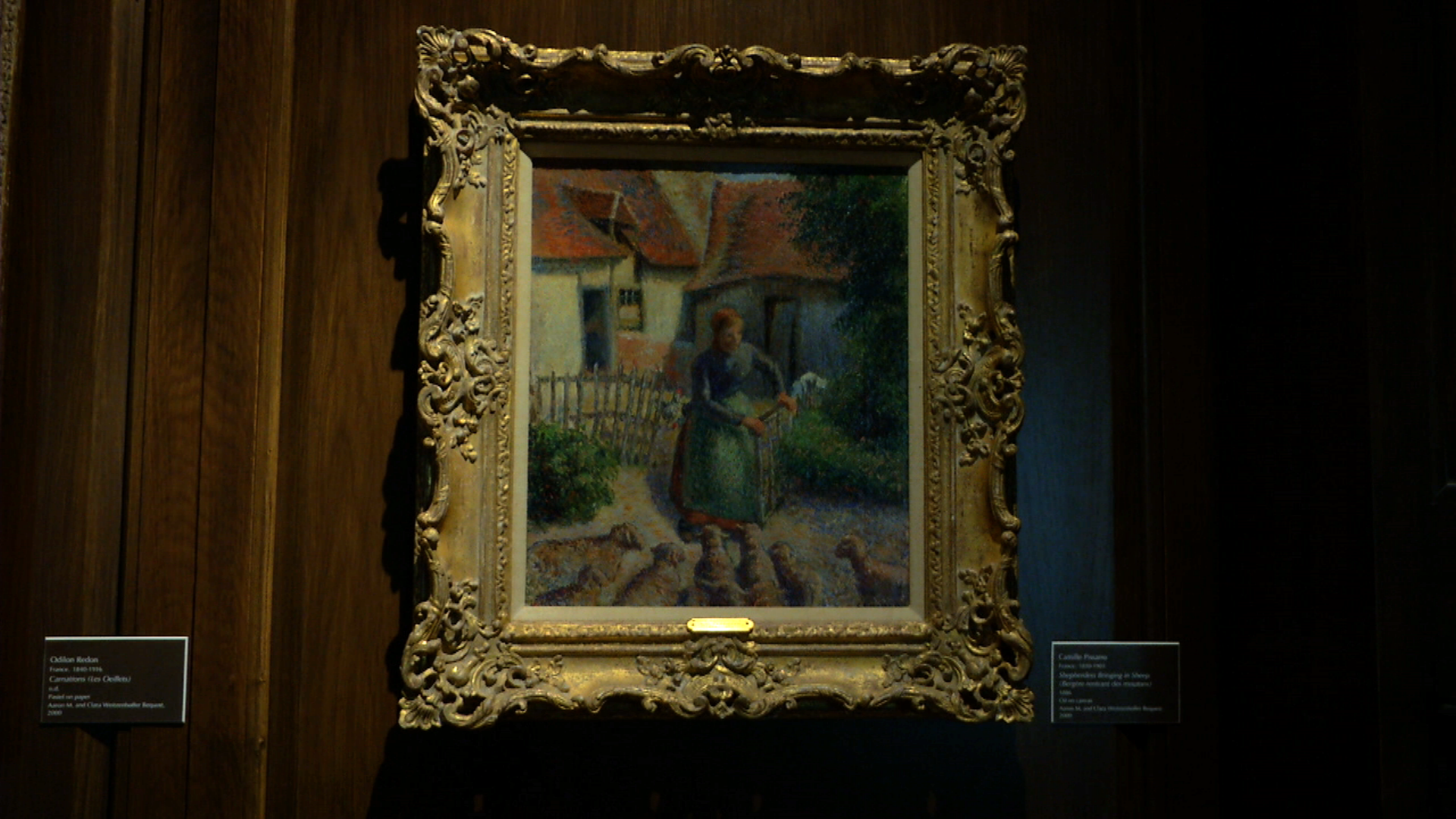 Camille Pissaro’s “Shepherdess Bringing in Sheep” at the Fred Jones Jr. Museum of Art at the University of Oklahoma Museum. Photo by NewsHour Weekend

After the war, the painting had migrated to Switzerland, the Netherlands and New York, where it was purchased in the 1950s by a family who later donated it to the University of Oklahoma. 50 years later, the painting was estimated to be worth between $600,000 and $700,000.

“This has nothing to do with money. It is about justice and a duty to remember,” Meyer wrote in a 2014 public letter. “Restitution is a posthumous victory for the victims over barbaric behavior.”

David Boren, president of the University Oklahoma, saw the letter. “I thought, ‘Why don’t you write me?’” he said.

The two parties agreed last month that Meyer would hold title to the panting, and she and the university will share display rights. Half the time, the painting will be in France, and the other half, it will live in Oklahoma.

“We did not want to be the repository of art which had been stolen from a family, give no credit to that family, not even recognize it,” Boren said.

By 2013, the Rosenberg family had recovered all but 60 paintings looted by the Nazis from Paul Rosenberg’s collection. But its search dead-ended until Rosenberg’s daughter-in-law, Elaine, discovered in an exhibition catalog that a long-lost Matisse painting, “Woman in Blue in Front of a Fireplace” (1937), was on loan to the Centre Pompidou in Paris from the Henie Onsted Arts Center in Oslo, Norway.

The museum maintained it did not know the work had once been stolen, and under Norweigan law, a person who possesses an item in good faith for more than a decade becomes its owner. But a year later, the Oslo museum surrendered the work, the first such restitution for Norway.

The Rosenberg family’s search returned to Germany with the discovery of 1,284 art works that had been hidden in the Munich apartment of the aging Cornelius Gurlitt, the son of a Nazi art dealer. Gurlitt possessed a long-missing Matisse painting, “Seated Woman” (1923), which Paul Rosenberg had originally acquired from the artist. For decades, the family possessed only a black and white photograph of it, until German authorities showed a color picture at a press conference.

At first, Gurlitt said no legal grounds compelled him to return anything. The Washington Principles, Gurlitt said, are not laws that could be enforced in Germany. But after Gurlitt’s death in 2014, his legal team and the German bureaucracy relented.

Christopher Marinello, of the London-based Art Recovery Group, negotiated for the Rosenbergs the return of both Matisse paintings, worth an estimated $60 million combined, according to published reports.

The cases keep coming. Last year, Marinello’s Art Recovery Group, along with the Commission for Looted Art in Europe, brokered the restitution of an El Greco’s oil painting “Portrait of a Gentleman” (1570) that the Nazis had stolen from a Vienna family.

This year, Marinello helped the Jaffe family — the same family that reclaimed the Turner landscape from the Kimbell Museum in 2006 — track down a 200-year-old Venetian landscape looted by the Nazis that had been in the possession of an Italian collector for three decades. The painting sold at auction for $209,000 last month.

This fall, a trial in Los Angeles federal court will decide the fate of “Adam” and “Eve” by Lucas Cranach the Elder, a pair of 500-year-old paintings that hang in the Norton Simon Museum. The plaintiff is a Connecticut heir of a Dutch Jewish collector, Jacques Goudstikker, who was robbed by the Nazis in 1940. Holocaust Art Restitution Project co-founder Marc Mazurovsky calls the Goudstikker heirs’ claim “ironclad.”

Goodman, for his part, still starts every morning scouring auction sites online. Last month, he obtained restitution from a Zurich auction house of a Solomon von Ruysdael landscape the Nazis had stolen from his grandfather’s collection in the Netherlands.

“It’s a point of honor to get back what I can,” Goodman said. “We’re by no means finished.”