We filed yesterday the opposition to the motion to dismiss my clients' claims over the 1935 forced sale of the Guelph Treasure, or Welfenschatz. The motion was filed two months ago by defendants Germany and the Stiftung Preussischer Kulturbesitz. As we noted when Germany first moved to dismiss the complaint last fall, Germany's arguments were revisionist and alarming in a number of troubling ways, most seriously because they tried to excuse persecution of Jews before an arbitrary date as an internal affair not subject to U.S. court jurisdiction, and because it repudiated Germany's international commitments under the Washington Principles to address restitution claims on the merits. The abject failure of the Advisory Commission, which Germany tries to portray here as some sort of arbitration (which it is not) is also at the fore. 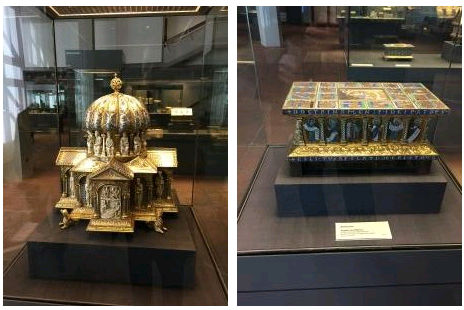 A full copy of the opposition and associated papers (including the supporting appraisal of the 1935 value, barely a third of the price that was paid and not freely available) can be read or downloaded here. Our clients are confident that the court will agree that it has jurisdiction to adjudicate the defendants' wrongful retention of their ancestors' property and that Germany's excuses are too little and too late. The stakes here are high: readers know our view of the state of Germany's national level restitution policy of optics over substance. As an overview of the issues involved in the pending motion, the introduction from our opposition is reproduced here:

The Nazi death camps did not spring fully formed into history. Indeed, the Holocaust did not begin in 1942 when the Nazis—including those involved in the facts of this case—conspired at the Wannsee Conference to plan the industrialized murder of every Jew in Europe. It did not begin when German troops crossed into Poland on September 1, 1939 and started World War II. It did not even begin when Germans smashed the homes and businesses of Jews on November 9, 1938—the infamous Kristallnacht. The Holocaust began on January 30, 1933, when Adolf Hitler became Chancellor of Germany, and the institutionalized persecution of German Jews commenced immediately. Plaintiffs' ancestors were swept up in that storm. From the moment the Nazis took power, the collection of art dealers that each owned part of the iconic collection of Medieval devotional art and reliquaries known as the Welfenschatz, or Guelph Treasure, were in the sights of officials stretching all the way to Hitler. And when the levers of power began to pivot towards the Welfenschatz—in 1933—those Jewish art dealers had no chance.

Defendants presently seek the jurisdictional dismissal (or the parallel avoidance of substance, their premature and unwarranted statute of limitations defense) of Plaintiffs' case for a simple reason: this case can only be litigated and won by endorsing the coercive and rapacious acquisition of the art in question in this case by Hermann Goering. That is to say, Defendants could only prevail in this case by endeavoring to prove substantively the validity of a scheme hatched in a letter to Hitler, prosecuted with the knowledge and support of Goering, to take the Welfenschatz from Plaintiffs' ancestors. Germany's international reputation could never recover from such an endeavor, and Defendants are understandably keen to avoid it if they can. Plaintiffs respectfully submit that the Court should not indulge them, because the legal arguments they offer here are insufficient reason to do so.

Plaintiffs are the successors to those men whose world and professional lifeblood was taken by Germany—a Defendant in this case. They come before this Court because Congress conferred jurisdiction over claims such as the Plaintiffs' pursuant to the Foreign Sovereign Immunities Act (FSIA). The FSIA identifies those circumstances in which foreign sovereigns (Germany) and their instrumentalities (the SPK) cannot claim sovereign immunity and are subject to this Court's jurisdiction under what are known as the expropriation and commercial activity exceptions to sovereign immunity. In this case, the FSIA confers jurisdiction over Plaintiffs' claims arising out of their allegations that the Welfenschatz was conveyed under duress in 1935 to a straw man for the Prussian government at the bidding of Hermann Goering. The reasons that the FSIA applies here are straightforward. Any transaction involving Jews in Germany 1935 carries a legal presumption of coercion and invalidity, a presumption that was imposed by the victorious Allies that had to defeat Defendant Germany in a war it had started, the worst that the world has ever seen. After the war, the Allies established principles of international law that recognized Germany's genocide and disregard for property for what it was. Jewish victims of persecution like the Plaintiffs' ancestors are victims of takings in property in violation of international law. As a result, and because the Defendants are engaged in commercial activity in the United States, this case presents precisely the category of claims over which § 1605(a)(3) of the FSIA, the expropriation exception, creates jurisdiction.

Against this, Defendants take a position that is almost too remarkable to believe. Germany, the instigator of the Holocaust and World War II, contends that the persecution and expropriation of property from its Jewish residents were a sufficiently internal affair so as not to be a violation of international law. In addition to the callousness that this argument reflects, it is a contention that has been rejected by every court thus far to consider claims to Nazi-looted art brought under the expropriation exception. Defendants offer a variety of excuses for this assertion, but they all boil down to this: Germany believes that it has done enough when it comes to Nazi-looted art. As the First Amended Complaint makes clear, nothing should be further from the truth. The obvious absurdity is Germany's argument that while the actions of Nazi allies like Hungary against their own citizens are not immune from review, Germany's destruction of its own Jewish population (including Plaintiffs' ancestors) was somehow a purely internal affair that should not be subject to jurisdiction.

In the alternative, the FSIA provides jurisdiction over Plaintiffs' claim for unjust enrichment pursuant to § 1605(a)(2), the commercial activity exception. If Defendants' characterization of the 1935 transaction were to carry the day, then it would be, in their own words, a purely commercial event. Defendants' actions in Germany, and their actions in the United States, would meet the elements of that exception to sovereign immunity.

Despite Defendants' various arguments, there are no legal, prudential, or equitable impediments to Plaintiffs' claims. Plaintiffs' case is squarely in line with the foreign policy of the United States and does not provide any basis to constrain this Court's jurisdiction. There has been no adjudication to date in Germany that is entitled any comity or deference. There is, indeed, no administrative remedy available that Plaintiffs could exhaust, but even if there were they are not required to do so before bringing this action. Defendants disingenuously refer to the Advisory Commission created by Germany in 2003 that presided over an unsuccessful mediation as "the chance [for Plaintiffs] to make their claim." Motion at p. 35. The Advisory Commission is a non-binding body that renders recommendations to German museums, nothing more. Defendants well know this and proclaim as much routinely.

Not only is the Advisory Commission a mere consultative body, it is also a sham. In thirteen years it has presided over a paltry number of disputes relative to the scale of Nazi-looted art in German museums, and has established in recent years that it exists only to create a pretense of offering fair and just solutions to victims of Nazi plunder and their heirs. In the Plaintiffs' case, it heard compelling evidence of the fractional value that the 1935 transaction supposedly gave to the Plaintiffs' ancestors—to which they were not allowed free access—established by an expert appraisal by Sotheby's. It saw the documents in which Goering and Hitler's henchmen discussed explicitly the small portion of the Welfenschatz's actual worth that the transaction paid. It heard nothing in response from Defendants, yet it waved away Plaintiffs' claim in a conclusory recommendation. Since then, the Advisory Commission has continued to embarrass itself with recommendations that make pronouncements such as the suggestion that conditions for Jewish bankers in 1935 in Germany were not really all that bad, a contention that would come as a great surprise to Germany's Jews of the time.

This deficiency underscores why the Defendants' forum non conveniens argument fails to persuade. Germany is not an adequate forum. Its courts are hostile to restitution claims and would not hear this case. Even if, as Defendants self-servingly suggest, they would not themselves raise the statute of limitations in Germany, it would not mean that Plaintiffs would find a viable forum there. Substantively, Germany has proven a complete inability to address substantively the question of Nazi looted art. Despite the adoption of the 1998 Washington Principles on Nazi-Stolen Art, the 1999 "Erklärung der Bundesregierung, der Länder und der kommunalen Spitzenverbände zur Auffindung und zur Rückgabe NS-verfolgungsbedingt entzogenen Kulturgutes, insbesondere aus jüdischem Besitz" vom 9. Dezember 1999" (the "Collective Declaration") that committed Germany's federal government and 16 states to the Washington Principles, and the creation of the Advisory Commission itself, Germany's national level restitution policies are completely incoherent. Even more tragically, given Germany's admirable confrontation of its past in other respects, when it comes to art, Germany is more at home in the company of the countries of Eastern Europe that barely acknowledge the historical reality at all (as the Motion concedes). The "progress" that Defendants tout is taken out of context and is out of date. In short, Germany is hurtling in the wrong direction when it comes to Nazi-looted art, tragically ironic given Germany's sole responsibility for the issue. The Defendants' gloating in the Motion about the recommendation of the useless and compromised Advisory Commission that they themselves control only proves the point.

Further, even if Germany were an adequate alternate forum, Defendants have not met their burden to meet the public and private factors necessary to disturb Plaintiffs' choice of forum. Two Plaintiffs are United States citizens. There is no meaningful difference in the burden that the translation of documents imposes; whether the case is there or here it will be litigated in a language that is foreign to one side of the case. This Court is entirely competent to consider the application of German law.

Lastly, Plaintiffs' claims are timely. Defendants' assertion of the statute of limitations flouts two decades of international commitments by dozens of nations around the world to reach the merits of Nazi-looted art claims. It is sad that Germany, responsible above all others in the first instance, is the first such nation in history to plead the passage of time as a defense to its art looting war crimes. Legally, the fact-intensive argument advanced by Defendants is wholly premature on a motion to dismiss. It is also wrong as a matter of actual fact. Germany itself, through the adoption of its various policies, has agreed to hold disputed objects like the Welfenschatz in trust pending any resolution. It did not break that promise until 2014. Furthermore, the documents that demonstrate the high level conspiracy involving Goering were only recently available from their archival sources.

The content of this article is intended to provide a general guide to the subject matter. Specialist advice should be sought about your specific circumstances.