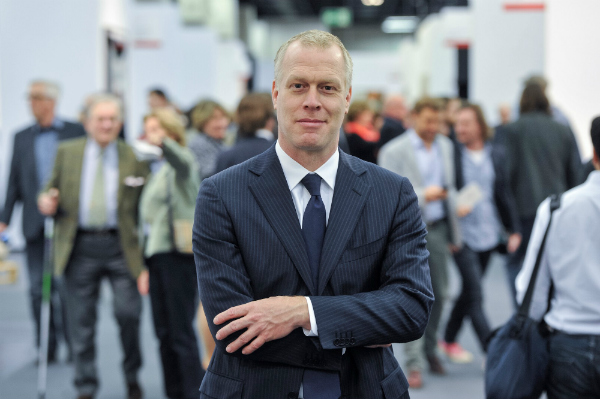 Art Cologne, the oldest international fair for contemporary and modern art, is marking its 50th anniversary this year. What was started by local dealers in 1967 as a small affair intended to breathe new life into a faltering German market ended up profoundly impacting the global art market. The fair has established itself as the leading platform for postwar German art, and is known to attract collectors from the region who are knowledgable about art, and who take the time to engage in conversation before closing a deal.

In 2008, Swiss-born, US-raised Daniel Hug (who is the grandson of László Moholy-Nagy) took the reins at Art Cologne, a change that has proven crucial to the fair's revitalization. Amid a changing global art fair system, artnet News spoke to the dynamic fair director about the recent controversy surrounding the new proposed German art law, the recent brawl with Berlin's Gallery Weekend—which next year's edition of the art fair will clash with—and what small fairs can do to remain relevant while the big art fairs keep expanding.

The company managing the fair has recently announced new dates for next year's edition, which will coincide with Berlin's gallery weekend. How do you think this might affect the fair?
To set the record straight, we usually take place in the second or third week of April, we have a window of two weeks where the fair can take place reserved each year. Unfortunately both of these weeks in 2017, unlike in previous years, land on the Easter Holidays of North Rhine Westphalia, which will run from Monday April 10 until Friday April 22. Most people will leave for the holidays already on Saturday, April 8 and will not return until Sunday the 23rd, thus we would have a fair in 2017 when pretty much all the big regional collectors are away on holiday. The decision to move was to avoid being in the middle of the Easter Holidays.

Due to how late the holidays take place in 2017, it is not possible to move the fair to the first week of April, which is the traditional date for another fair. The same is true for the weeks in early May. You have to remember that we need two weeks for building up the walls and architecture of the fair, and one week for de-installation.

While some collectors might attend both events, several exhibitors expressed some reservations about participating in both Art Cologne and Gallery weekend. How is the fair attempting to convince Berlin galleries to come?
There will be galleries who will participate in both events, others that will have to decide on only one, this is unavoidable. We will do our best to support those galleries that decide to do both.

The fair has recently sent out an open letter criticizing the new draft for a planned law to protect German cultural patrimony. What is your personal take on the law?
This law will be highly counter-productive on so many fronts, it basically amounts to wide-scale market manipulation on the side of the German government. If this law comes to pass, many collectors and dealers will start automatically exporting works of blue chip artists. Already now many private collectors and dealerships are exporting works fitting the criteria defined by the law into storage in Switzerland and Luxembourg.

The latest version of this law proposes that, in order to leave the country, works older than 70 years and valued over €300,000 will have to be approved by a regionally elected board of "Cultural Officials," including museum directors, private dealers, politicians … etc. As you can see, it's highly problematic, for one, the implementation and effort and the steep costs in maintaining a dozen of these committees who will have to review any artwork which fits the criteria, and this is a lot, especially from galleries and private collections.

If it comes to pass, this law could potentially devalue work by a class of postwar artists highly recognized in Germany and who are just starting to gain international recognition. In the end, the artist might very well fall back into regional oblivion and their prices would drop to a point where you can export the stuff then anyway. It's just idiotic.

The worst part about this is that this proposed law is a mixed bag not only addressing the export of Modern Art, but the import of stolen and looted art from Islamic State controlled areas in the Middle East! And to top off the cake, Monika Grütters, the politician behind this legislation, is also the main driving force behind the New Museum of Modern Art in Berlin, which will have a big new building but not really any art! 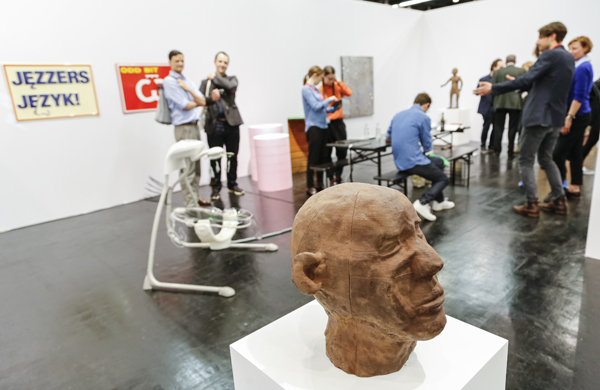 This year we saw various announcements regarding shifts in the art fair landscape: Some have folded, like FIAC Los Angeles, while other are expanding across the Atlantic, like TEFAF, or taking over existing regional fairs, like Art Basel's MCH group. Does this pose a challenge to Art Cologne?
The expansion and the branding of multiple fairs under the same name is in my opinion highly problematic. I am very pleased with the fact that there is only one Art Cologne, that we were the first, that we are still going strong having survived many ups and downs. Fifty years is a long time, most fairs come and go after 10 to 15 years.

Indeed, this year's edition marks the fair's 50th anniversary. How is the fair celebrating this milestone?
Promoting Art Cologne's important and rich history has been a major aspect since I started running the fair eight years ago. Professor Herzog from ZADIK, the Central Archive of International Art Trade, has been enormously helpful here and a great resource. The 50th edition of Art Cologne will have four special exhibitions relating to the 50 year history of the fair in total: Together with ZADIK we will present documents and ephemera pertaining to the history of Art Cologne; with Deutsche Bank we're presenting works from their extensive art collection acquired over the last 50 years at the fair; we are dedicating our sector Film Cologne this year to moving image relating to the Rhineland in an exhibition titled "Rhinescope" and curated by Philipp Fürnkäs; and the fourth exhibition takes over the entrance hall of the fair, and is the second year we have invited gallery owners to curate exhibitions.

This time, Dutch gallerist Ellen de Bruijne and the Belgian curator, and former gallery owner, Stella Lohaus have organized an exhibition centered around the theme of influence, cross-over, and cooperation between Belgium, the Netherlands, and Germany. This has been made possible by the Mondriaan Fonds, Flanders Arts Institute, and several private and public collections.‎ The greater region of Benelux and the Rhineland is such a dense area full of cities and industry, and tons of private and public collections. Early on, I noticed the importance of the region collectors, something my predecessor took for granted, so the Belgian, Dutch, and German show will hopefully bring this to light. 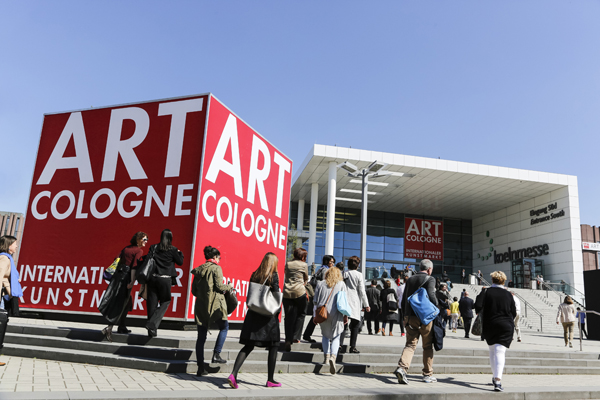 Since you took the reins, the fair has undergone a rejuvenation of sorts, and last year, the introduction of a new floor plan was very well received. What other plans do you have to keep the fair dynamic?
The fair in my eyes is perfect now and has never looked better, the new layout is very user-friendly now, two of the halls are only two aisles deep, the large hall four aisles deep, making it easy to traverse making it possible for visitors to see everything. It is a perfect overview of art of the 20th and 21st century. To keep things fresh, I have engaged a couple of the newer generation of galleries to join the Art Cologne committee, who of course will bring new fresh ideas to the table. It makes me feel old, but is a very important move.

And keeping with the theme the 50th anniversary, what are some of your favorite moments from the fair's more recent history?
Top of my personal list is the show we did with Panamarenko in 2010, such a great amazing and wonderful man! Also 2012 when we presented Paul McCarthy's giant aluminum Apple Boy and Apple Girl sculptures in front of the fair entrance. And the circus we organized with the Danish artist Jeppe Hein together with Johann König. Also, before my time, the presentation of Jannis Kounellis's 12 Horses installation which my predecessor Gérard Goodrow presented at the fair in 2007. We are publishing a book with Walther König Books presenting a chronological history of the first fair for contemporary art, which will be released during the fair.