The 16th-century portrait was a bargaining chip in the spring of 1943. 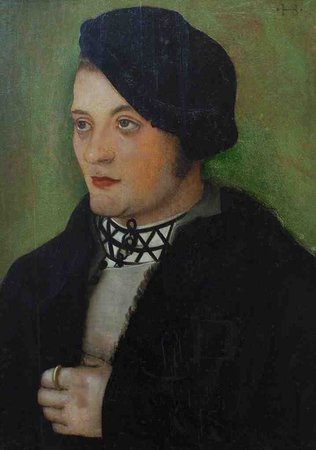 "Portrait of a Young Man" by Hans Baldung Grien was stolen in 1943.

Friedrich and Louise Gutmann, a Jewish couple from a prominent banking family, hoped to trade it for their lives.

Adolf Hitler's art dealer ordered the painting, along with others from the famous Gutmann collection, shipped to Germany in exchange for the couple's safe passage from the Netherlands to Italy.

But the Nazis reneged on the deal. The Gutmanns ended up in concentration camps, where they died, and their 1509 painting - Portrait of a Young Man by the German artist Hans Baldung Grien - mysteriously disappeared on the way to Berlin.

It was lost to the family until this month.

After an odyssey that took it to different countries and into the hands of Nazis, thieves, art dealers, and collectors, the painting was returned Jan. 14 to the Gutmanns' grandson, Simon Goodman, by the Zimmerli Art Museum at Rutgers University in New Brunswick, N.J.

Goodman, a Los Angeles man whose family had been searching for the artwork since the end of World War II, accepted it on behalf of his brother Nick, also of Los Angeles, and their 91-year-old aunt, Lili Gutmann of Florence, Italy. The piece had been donated to Rutgers in 1959 by an art collector.

"As lovely as the painting is, what's more important is the justice that's being done and the fact that we can close a chapter in this most unhappy saga of ours," Goodman said. "I can't verbalize how satisfying this is, especially since, in this instance, we came across very decent, sympathetic people at the Zimmerli and Rutgers.

The Zimmerli "clearly wanted to do the right thing," said Suzanne Delehanty, director of the museum. "What happened in the Holocaust was one of the black moments in human history.

"You want to do anything you can to correct - in some small way - this historic wrong."

When Goodman's father died in 1994, the family learned a surprising story from his personal papers: Bernard Goodman had been on a quest for decades to retrieve the family's great art collection, plundered by the Nazis.

"My father didn't tell us what he had been doing," said Simon Goodman, 62. "I thought the whole issue of war reparations was over, and it wasn't."

A British soldier who anglicized the Gutmann name to Goodman, Bernard Goodman searched for the art with his sister Lili, running into many obstacles along the way.

"He was a private and sad person who met frustration and rejection after the war," Simon Goodman said. "He did get quite a lot back."

But there was much more to find.

"I went through his papers and called my aunt [Lili] in Italy and asked what was still out there," Simon Goodman said. "She reluctantly talked about it."

Simon Goodman learned more about the deal his grandparents had made and the loss of the art.

"My grandparents were offered domicile in Italy, where Mussolini's government was not quite as anti-Semitic as Germany's," he said. "That was the plan, and the paintings, one way or another, were turned over to the Nazi agent."

Nine works, including the Baldung Grien, and two Spanish Renaissance-era shields from the 1500s were delivered to the Nazis, Simon Goodman said. But the Gutmanns, rather than heading to Italy, were met by two SS officers who escorted them to a Berlin-bound train.

Hitler confidant and Luftwaffe head Hermann Goering had learned about the family's private Renaissance collection of silver and gold and wanted Friedrich "Fritz" Gutmann to sign it over, Simon Goodman said.

When he refused, he was taken to the Theresienstadt concentration camp, where he was interrogated and beaten to death. Louise later was killed at Auschwitz.

Meanwhile, the Gutmanns' paintings - minus the 181/8-by-13-inch Baldung Grien - went to Berlin. The missing portrait was part of a larger family collection of about 60 masters, including works by Bosch, Botticelli, Cranach, Holbein, and Memling, as well as impressionist pieces by Degas and Renoir.

The Baldung Grien "was stolen from the thief," Simon Goodman said. The painting "probably was taken in Paris [where it had been stored by the Gutmanns] before being shipped to Berlin."

After the war, Bernard Goodman returned to Bosbeek, the Gutmanns' 18th-century estate house outside Haarlem in the Netherlands, found it totally stripped, and began his art search.

The Portrait of a Young Man apparently showed up in London in the late 1940s and early '50s, then wound up in the collection of New York art dealers Rosenberg & Stiebel in 1953, Delehanty said.

It was sold to international art collector and dealer Rudolf Heinemann, who donated the painting to Rutgers University in 1959.

It later became part of the collection of the Zimmerli Museum at the university, which planned to exhibit it this spring.

Simon Goodman's phone call caught Delehanty off-guard in September 2009. She had only recently been named the Zimmerli's director when she heard his unusual story.

Simon Goodman had been paging through a rare art catalog at the Getty Museum in Los Angeles when he saw a black-and-white image of the missing painting and learned it was at Rutgers.

He "said he thought we had a portrait that belonged to his grandparents," Delehanty said. "I never thought in my life that I'd receive a call like that."

For the Los Angeles man, seeing the painting for the first time in October 2009 was an emotional moment.

"It's almost like coming across a family member," Simon Goodman said. "It's something still alive and real - after being smuggled by crooks and Nazis."

"In the book, I saw just a little black-and-white picture," he said. "To see it in color was quite startling. It was still beautiful and vibrant . . . even after a half a millennium."

Simon Goodman received the portrait about a year later - after the museum was able to confirm his ownership claim. Today, he continues his search for at least 17 more family-owned paintings, Louis XV furniture, and silver stolen by the Nazis.

"I'm passionate about this," he said. "As much as I hate researching the Nazis, I enjoy researching the painters. When we have success [finding the stolen property], it's thrilling."

"It feels right on so many levels," Simon Goodman added. "What the Zimmerli has done is a legal precedent. I hope it helps other families."

The Baldung Grien portrait will be auctioned off in New York because its value must be shared by all the family, Simon Goodman said. But a high-resolution print on the same material will join copies of other paintings that now make up a re-created Gutmann collection.

"It's sad to give up a beautiful Renaissance portrait, but if it had to go, I can't think of a better reason for it to go," Delehanty said. "This was the right thing to do."