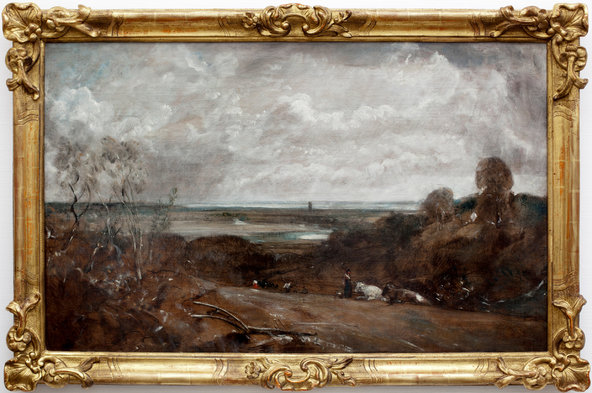 Constable’s  “Dedham From Langham,” in a Swiss museum.Credit

PARIS — Jewish descendants of the owner of a John Constable landscape have sued to reclaim the painting from a regional Swiss museum where it hangs now with a note acknowledging that it was illegally seized during World War II.

Since 2006, the heirs of Anna Jaffé and the Musée des Beaux-Arts in La Chaux-de-Fonds in northwest Switzerland have clashed over the rights to the landscape, “Dedham From Langham,” an 1873 scene of the English countryside that has been valued at about $1 million.

The relatives have tried various approaches to wrest it back, including an unsuccessful effort to organize a referendum for local residents to vote on whether to return the painting.

The museum and city officials in La Chaux-de-Fonds, a town of about 38,000 people, have long argued that they accepted the painting in good faith as a donation from a local collector and that Swiss law does not require restitution or an exchange of money in such cases.

Alain Monteagle, a retired French history teacher who has helped his family recover 10 other works from museums in France and Texas and private collectors, said Monday that he and his relatives decided to sue now because the museum’s latest offer — to acknowledge that he and his heirs were the rightful owners, but on the condition that the painting remain in the museum — was unacceptable.

The painting belonged to Mr. Monteagle’s great-aunt, Jaffé, a childless British expatriate whose belongings were seized a year after she died and auctioned off in July 1943 in Nice, France.

The lawsuit, which was filed Jan. 15 in a Swiss regional court, describes how British diplomats learned about repeated attempts to resell the painting in 1945 and tried to locate the work, which was noted on an American list of objects looted during the war. It was sold in 1946 to a Swiss businessman, René Junod, and his wife, Madeleine Alice, who died in 1986 and bequeathed it to the museum.

A lawyer for the city declined to comment on Monday, saying that the city had not yet been formally notified by the local tribunal about the lawsuit.

Ronald S. Lauder, the president of the World Jewish Congress, said that the dispute was significant because “this case could not be more clear-cut.”

“The painting was stolen from the Jaffé family and it should be returned,” Mr. Lauder said. “The Swiss reaction shows a troubling lack of shame since there is no gap in the provenance.”

He said that he intends to bring up the case in Zurich in February when he delivers a speech on Nazi-looted art at an event organized by the Swiss Jewish Community Federation.