PARIS — In 2001, when Daniel Wildenstein lapsed into a coma here just days before his death at 84, French authorities say, his two sons and a team of financial advisers began quickly reshuffling the holdings of this wealthy patriarch who had led one of the greatest art dealing-dynasties of the 20th century. 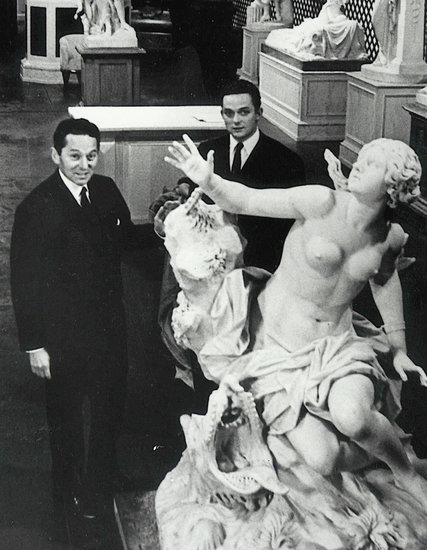 Daniel Wildenstein, left, and his son Alec in New York in 1965.

Almost $250 million worth of art was shipped from family vaults in New York to tax havens in Switzerland, the French government’s criminal investigators say in a report; even the ownership of his prized thoroughbred horses was abruptly transferred to a newly formed family company while he lingered unconscious in a hospital bed.

The secret effort was part of a gigantic undertaking, the French authorities say, to avoid an estate tax bill in France and potentially in the United States. The French government has calculated that the estate could owe, with fines and interest, at least 550 million euros, or roughly $600 million, in France alone. Next month, several family members are scheduled to go on trial here on tax fraud and money-laundering charges. The primary targets are Daniel Wildenstein’s son, Guy, 70, who is the president of Wildenstein & Company, based in New York; his entourage of Swiss and French financial advisers; and offshore private banks. (Daniel Wildenstein’s other son, Alec, died in 2008.) Tax fraud carries a maximum prison sentence of seven years, and possibly other fines.

For a family whose limestone mansion gallery was long a landmark of the New York art world and whose legacy includes widely embraced scholarship on Manet and Monet, the trial represents the latest in a series of familial battles, including estate fights, a messy divorce, even allegations of harboring missing art, that have sullied what was once a reputation for discretion and erudition.

But this case is far from another family squabble. The trial is expected to raise uncomfortable questions about how the Wildensteins did business and explore the complex and opaque processes by which some in the international art market use foreign trusts, shell companies, Swiss tax havens, even anonymous loans to museums, to shelter assets.

“It is really the first time that a trial like this in France is exploring the use of trusts and determining whether they are legal or illegal,” said Claude Dumont-Beghi, a lawyer who represented Daniel Wildenstein’s widow, Sylvia, through eight years of battles with her stepsons, Guy and Alec Wildenstein, over her share of an inheritance. “How did the family build its fortune and empire under this system?” 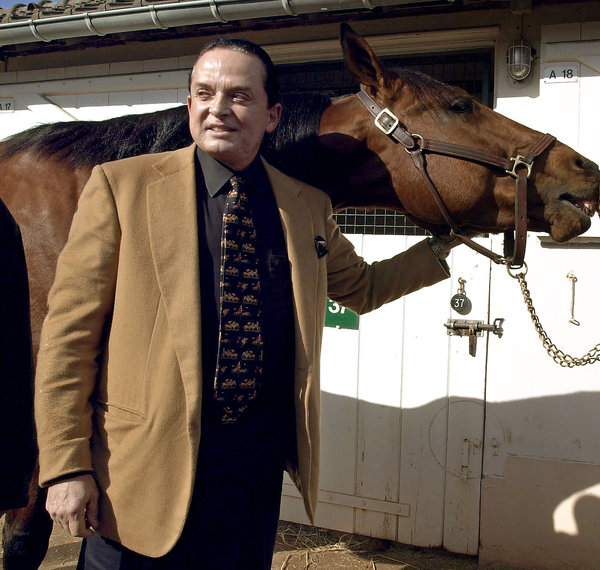 Alec Wildenstein, one of Daniel Wildenstein’s two sons, who died in 2008, is shown here in Deauville, France in 2002.

The heart of the trial is the contention by French authorities that the Wildensteins, aided by banks and advisers, hid assets to avoid the inheritance tax. In a 2008 accounting, the Wildenstein family estimated the value of Daniel’s estate at the time of his death at roughly $61 million. But the report by the government’s investigators contends that in reality, counting undeclared trust properties, art and other assets, including a Kenyan ranch, a French castle and the New York gallery, the estate was worth more than ten times that amount. (Parts of the report were first disclosed by Mediapart, a news website.)

Guy Wildenstein, who was awarded the Legion of Honor in 2009 by Nicolas Sarkozy, then the French president, declined to comment about the case. But he gave hints of his defense in an October interview with Paris Match magazine when he played down his own business acumen and knowledge about the trusts established by his father.

“My father never used to talk to me about his business affairs. He would not seek my advice to manage his fortune or dispose of his property while living,” he said. “I knew that he had trusts, but I was never informed of the details. I am not a tax accountant or a financier. All these legal aspects involved him because this was not my forte and he knew it.”

Guy Wildenstein has also argued that there was no legal requirement to report assets held in trust in 2001 when his father died, a position that has generated some sympathy from others in the French business world who viewed the laws as hazy. His advisers and the banks involved have also said they always abide by laws in France and in other countries.

Once a formidable presence in the art world, the Wildensteins’ influence in the market waned as tastes shifted from their specialty, old masters and Impressionists, to more contemporary art.

But among dealers, the Wildenstein gallery, which retains locations in New York and Tokyo and a research institute in the heart of Paris on the Rue la Boétie, still maintains a mystique because no one really knows what remains in its vaults.

“They are still a major actor in the market because they have inventory and they have wealth,” said Lionel Pissarro, an art adviser and dealer.

In Manhattan, the business is in a five-story townhouse on East 64th Street, which the company tried to sell to the Qatari government last year for $90 million. The Qataris canceled the deal, though, citing the money-laundering charges. The gallery is suing for the down payment, saying the Qataris backed out of the sale after deciding the price would seem profligate back home.

Many of the Wildensteins’ longtime struggles stem from financial quarrels with generations of women in the family who have complained of being excluded from the business, or cheated of inheritance. Most recently that includes a former wife and two widows. Their lawsuits have dislodged information that has helped the government’s case.

“There is a certain pattern to the female rebellion,” Mr. Dumont-Beghi said.

Jocelyn Wildenstein, Alec’s first wife, known for her extensive plastic surgery, more or less opened the internal workings of the dynasty (the business was founded by Daniel’s grandfather). Her revelations in the 1990s include information about the family’s free-spending lifestyle, which included that 58,000-acre ranch in Kenya, Ol Jogi, described as home to hundreds of elephants and white rhinos.

Sylvia Wildenstein sued her stepsons over her husband’s estate, contending that assets had been hidden from her. Her lawsuit revealed precious works of art hidden in storage spaces controlled by at least two offshore trusts. After her husband died, she and her lawyer found 19 Bonnard works in a Geneva warehouse. She also discovered that another asset, Caravaggio’s “The Lute Player,” had been lent to the Metropolitan Museum of Art in New York, where it hung for 10 years, the mark of generosity from an undisclosed “private collector.” It was returned to the family in 2013. 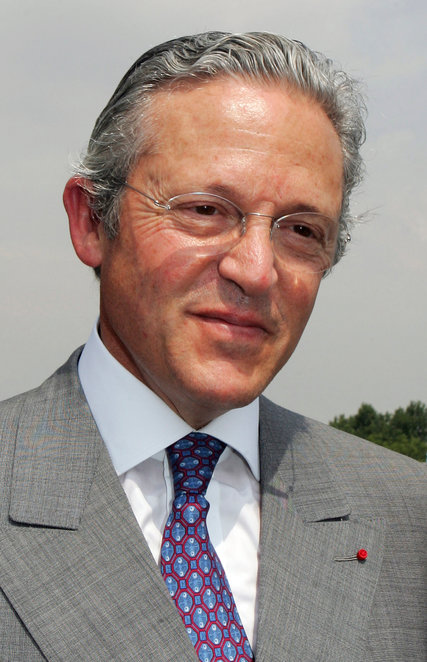 In 2005, a Paris appeals court ordered the Wildenstein brothers to advance 15 million euros (over $17 million) to Sylvia Wildenstein, concluding that she had been pressured by them and their legal advisers to renounce her inheritance rights because of looming tax debts.

In 2010, before she died, Sylvia Wildenstein castigated her stepsons in a final interview. “They betrayed me,” she said.

Today she is buried with her husband below the twin obelisks of the family’s towering tomb at Montparnasse Cemetery in Paris. But it is her maiden name that is inscribed.

There have also been revelations in legal action brought by Alec Wildenstein’s Russian-born widow, Liouba Stoupakova, 42.

Ms. Stoupakova, a sculptor and former model, is also a defendant in the coming trial, accused of money-laundering in connection with what the government contends were secret contracts she signed for loans from Guy Wildenstein that were used to pay income taxes after the death of her husband.

“Liouba is a victim in this affair,” Julien Vernet, her lawyer, said. “The trusts were hidden from her and she was used by French justice to obtain as many documents as possible.”

Mr. Vernet said Ms. Stoupakova found financial documents after her husband’s death that she gave to investigators, who were having difficulty unraveling offshore trusts that disguise the identities of real beneficiaries.

In her legal action against the Wildensteins, Ms. Stoupakova said that she resorted to taking loans from Guy Wildenstein because the family’s tax manipulation had left her unable to pay her bills.

Mr. Vernet cited correspondence, he said, that Ms. Stoupakova had found in which one of her husband’s tax advisers suggested increasing the amount of money the couple was declaring as their annual income in France for tax purposes. According to her civil lawsuit, this tax adviser wrote that this action would help explain how the family could afford such a lavish lifestyle and, at the same time, deflect any suspicions that might unearth their much larger, but hidden, financial resources.

“I completely understand the psychological impact, which paying taxes has,” the adviser, Olivier Riffaud, a former French tax inspector, is quoted as writing. “However it is better to pay a certain amount of tax and live in peace than trying to evade the tax burden at all costs.”

“You must therefore be able to provide proof of income without the source of the income raising further questions,” he wrote.

Mr. Riffaud, who is a defendant in the coming tax case, and his lawyers did not respond to a request for comment.

Even when that trial concludes, Guy Wildenstein may face another tax battle. Documents filed in the French court case said the I.R.S. intends to pursue taxes for the $250 million in artworks quietly shipped out of the United States when Daniel Wildenstein lapsed into his coma.