The Museum of Art in the northern Israeli artists’ town of Ein Harod has discovered that its collection includes a work looted from Jews in Paris by the Nazis, according to a Tuesday report.

The work, titled “The Beggar” and painted by an unknown artist, has now been put on show at the Green House in Tel Aviv as part of an international forum created by the government-established Holocaust restitution organization, Hashava, according to Israeli daily Yedioth Ahronoth.

The organization hopes that public display will yield clues about the work’s provenance and — according to the Hashava CEO Israel Peleg — will raise awareness about the need for government funding to locate other looted artworks that may be in Israeli museums.

Among the countless artworks stolen by the Nazis during World War II, some 600,000 belonged to Jews.

The Beggar” has been at Ein Harod since 1954, Elinor Kroitoru of the restitution company told The Times of Israel.

It was noticed by a visiting Polish-Jewish PhD student of looted art who knew that the stamp on the back of the picture meant it had been confiscated by the Nazis, Kroitoru explained.

“The stamp enabled her to go to the appropriate data bank and there she found the catalog card filled out by the Nazis after they’d confiscated it. The card included information about the painting, but not about the owners.

That same card, belonging to the ERR (Einsatzstab Reichsleiter Rosenberg, or Reichsleiter Rosenberg Taskforce, a Nazi organization which confiscated cultural property during the war) revealed that the painting had been stolen in Paris as part of a drive to confiscate Jewish property.” The Ein Harod museum did not know the work had been looted and Hasheva assumes that other museums are also unknowingly displaying works stolen by the Nazis.

“We think that the painting was brought to Israel after the war by Mordechai Narkiss, a leading figure in Israel’s art world, who was sent to Europe by the Jewish Agency to save the remains of Jewish art in Europe, ” Kroitoru said. 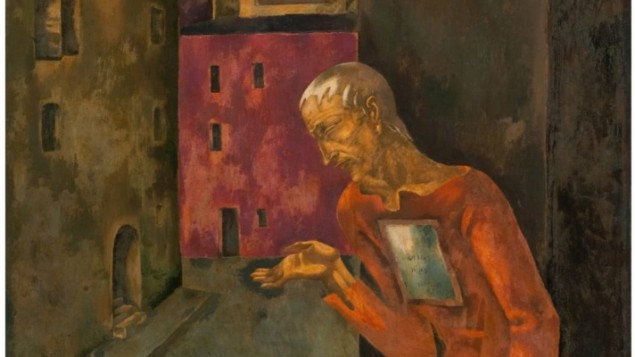 The Beggar, courtesy of the The Company for Location and Restitution of Holocaust Victims’ Assets

By the end of the war, the Allies had collected more than a million looted art objects from across the Third Reich. Some were found in rubble, others saved by the now legendary Monuments Men from a network of Nazi depots in far-flung monasteries and castles, including a huge trove in booby-trapped salt mines in rural Austria.

Many works have been returned to owners’ heirs since then, but the search goes on throughout the world for creations that are still missing.

In March 2012, in one of the biggest art stings since the war, the district prosecutor of Augsburg seized 121 framed and 1,258 unframed artworks from the Munich apartment of Cornelius Gurlitt, the son of Hildebrand Gurlitt, one of Hermann Goering’s specially approved art dealers. Many of the works were suspected to have been looted.

Closer to home, the Israel Museum says it has returned ten works of art to their legal owners in recent years. These include Max Liebermann’s “House and Garden in Wannsee” and “Return of Tobias,” and the painting “Veil Dance“ (1920) by Paul Klee – returned to the estate of art collector Harry Fuld Jr. In 2000, the museum returned “Boulevard Montmartre (1897) by Camille Pissarro to an heiress of Max Silberberg, murdered in the Holocaust. She decided to leave the painting on display in the museum on long-term loan.

Hashava was founded in 2006 by a Knesset law that tasked it with locating assets and finding the heirs that owned them. Unclaimed funds are used by the organization for the welfare of Holocaust survivors living in Israel and for Holocaust commemoration through education.